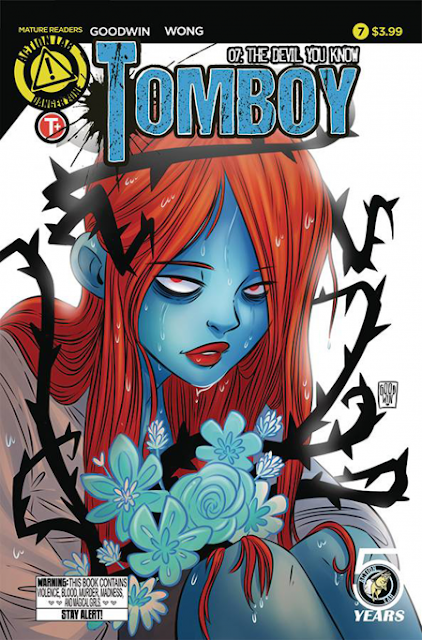 After the explosive ending of issue six, you expect a slight let-down in the following chapter as the consequences of those events get examined. However, Mia Goodwin has more up her sleeve than just a cooling down period after Addison administered some justice with extreme prejudice. Doling out vigilante justice is one thing, killing a friend is another thing altogether.

A burnt-out warehouse, three dead bodies, a new detective, a grief-stricken father, and a young woman whose magical powers couldn't save her friend tears her apart. The line between good and evil is blurred again in a series that puts its characters in morally compromised positions leaving no one without blood on their hands, both figuratively and literally. 'Tomboy' has been a lot of things already in its short. A girl-magic dark fantasy, police procedural, horror suspense thriller, and a coming-of-age story. And it does all well. It's made 'Tomboy' the best Action Lab title and one of the best in comics period.

These latest events put extra scrutiny on Irene Trent and her Trent Pharmaceuticals company. Without a detective on the take and on the inside anymore, Trent is going to have to explain why and who would burn down their warehouse full of expensive
drugs and the connection of a police car sitting in a river. The pressure is on her while Addison deals with her pain and new allies. And you'll never see fairies quite the same way again after reading this issue.

Michelle Wong, since taking over Goodwin, has kept a similar visual style only sharper and cleaner. The sequences at the crime scene stand out for their flow and dynamic angles. What could be a boring dry scene is viewed from different perspectives with enough background detail to fill the panel and the reader's eyes. It's like you're watching an episode of Law & Order. The colors are subtle and downplayed before getting slightly more colorful when Addison returns home. The artwork has been consistently professional and at times heartbreaking.

Following a powerful issue with another strong issue is no easy task unless you're Mia Goodwin and Michelle Wong. They followed with the perfect epilogue to the devasting last issue. The beats within this chapter were perfect, no victory lap for Addison, some revelations to existing characters and new storylines to sink your teeth into. Gail Simone, Ed Brubaker, Brian Azzarello, and Kelly Sue DeConinck are some of the best writers in comics. Goodwin is slowly making her case that she belongs among them. 'Tomboy' is dark and addictive.
Email Post
Labels: Action Lab comic books Mia Goodwin Michelle Wong reviews Tomboy