Among some great ongoing series dropping on Wednesday, a plethora of brand new #1 issues arrive to help relieve your wallet of all your extra cash. I hope you enjoy ramen because these fantastic new books are worth it.

The geek world is still abuzz about Netflix's Luke Cage series so it's only right with start with Marvel's new series 'Cage!' by Award-Winning creator of Dexter's Laboratory and Samurai Jack, Genndy Tartakovsky. Along those same Netflix lines comes a new 'Jessica Jones' series by Brian Michael Bendis and Michael Gaydos. Not bad for these great characters and now they're finding new fans on the streaming network.

But there's so much more. Brian Azzarello and Eduardo Risso reteam for Moonshine, 'Postal's Bryan Hill and Nelson Blake II bring an epic new assassin to comics in Romulus, Janet Harvey, and Megan Levens give us a pulpy new noir tale in Angel City, and Steve Orlando and Fernando Blanco bring Midnighter and Apollo together.

And there's still Betty Boop, Black, Shade the Changing Girl, Homies, Champions, and Shipwreck by some of the best talents in the business. Take a closer look at these incredible titles below and don't forget to click on the slideshow with music from the 'Luke Cage' series by Method Man. Happy reading! 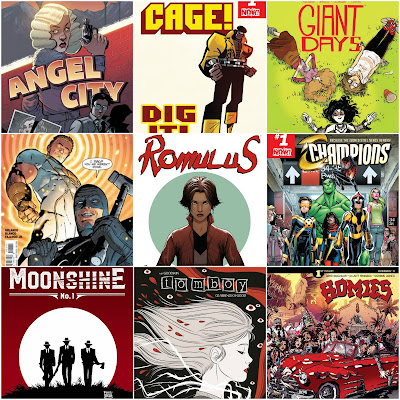 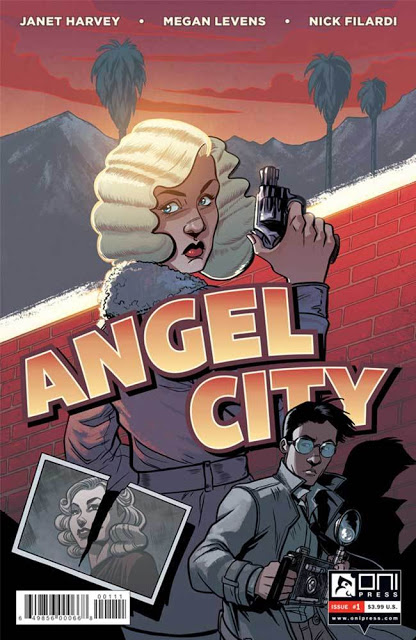 (W) Janet Harvey (A/CA) Megan Levens
Introducing ANGEL CITY, a hard-boiled 1930s noir starring Dolores Dare, previous Hollywood hopeful and current enforcer for the Volante mob. When her best friend turns up dead in a dumpster behind the Chinese Theater, Dolores starts her own investigation of the "April Fool's Killer."  As she gets closer to the truth, the studios, the corrupt homicide division, and even her own gangland contacts work to cover up the scandal. Has she bitten off more than she can chew? 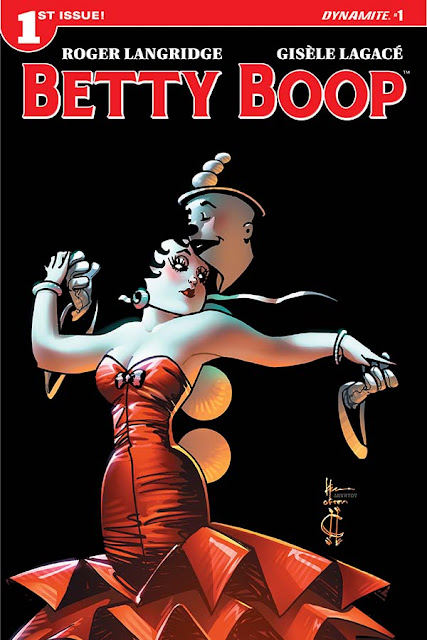 (W) Roger Langridge (A) Gisele Lagace (CA) Howard Chaykin
The most famous female cartoon star of all is back - and Dynamite has her! All-new adventures of Betty Boop (with her pals Koko the Clown and Bimbo, natch!) by award-winning writer Roger Langridge and Gisèle Lagacé. Join Betty as she works at the Oop-A-Doop Club, dreams of hitting the big-time, looks after her old Grampy... oh yeah, and FIGHTS GHOSTS! (Betty was always ahead of her time!) 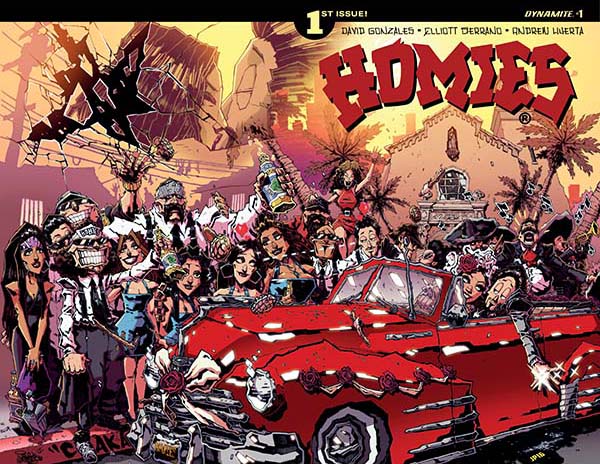 (W) David Gonzalez, Elliot Serrano (A/CA) Andrew Huerta
It's time to go back to the barrío with the HOMIES! The surprise hit of the 90's is back in a brand-new comic book series co-plotted by original HOMIES creator David Gonzalez and "Adventures of Grumpy Cat" writer Elliott Serrano, featuring all-new stories and never-before-seen characters.
With art and covers by Andrew Huerta, HOMIES #1 features the long-awaited wedding of Hollywood and Gata. It's been a day that she has imagined for her entire life, but now Gata has to deal with everyone trying to ruin it! What will she do when she hears the whispers about Hollywood and his womanizing ways? Will the wedding still take place when everything that can go wrong actually does? Is Hollywood destined to be a bachelor for life, or will Gata finally get him to settle down? It's a day that will be full of love, laughs and heartbreak. But for who? 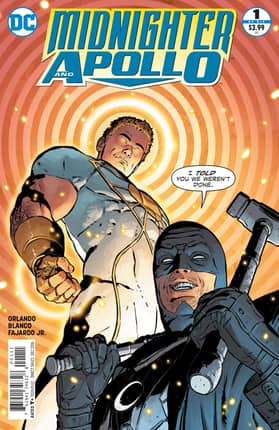 (W) Steve Orlando (A) Fernando Blanco (CA) Aco
You wanted it? You got it-six more issues of Midnighter madness! Together again after too long apart, Midnighter and Apollo take on subway pirates in Los Angeles and demons in Opal City...but their reunion is about to take a shocking turn and send them both on an epic journey beyond all belief! 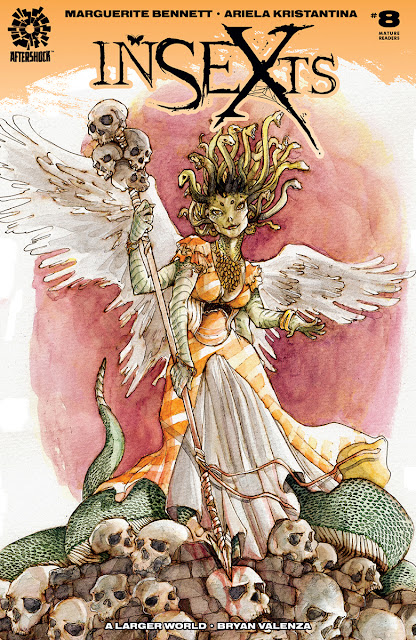 (W) Marguerite Bennett (A/CA) Ariela Kristantina
In this new story-arc, the lovers have barely survived their battle with the Hag, and must now flee to Paris to heal, recover, and restore their love. But beneath the City of Light is a world of darkness, a world pulsing with witchcraft, seduction, and utter, obscene monstrosity... 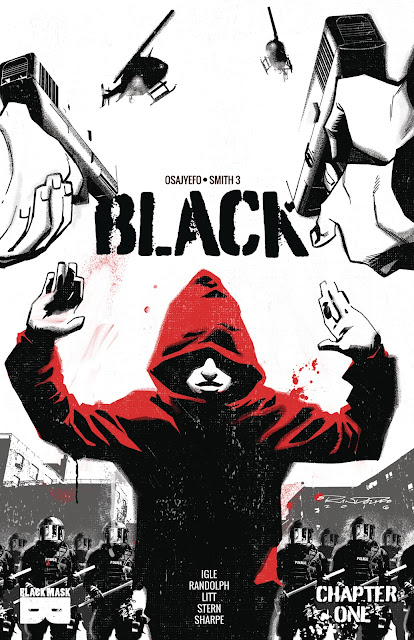 (W) Kwanza Osajyefo (A) Jamal Igle (CA) Khary Randolph, Ashley A. Woods
IT'S HERE! The comic that blazed through Kickstarter during Black History Month 2016.
In a world that already hates and fears them - what if only Black people had superpowers. After miraculously surviving being gunned down by police, a young man learns that he is part of the biggest lie in history. Now he must decide whether it's safer to keep it a secret or if the truth will set him free. 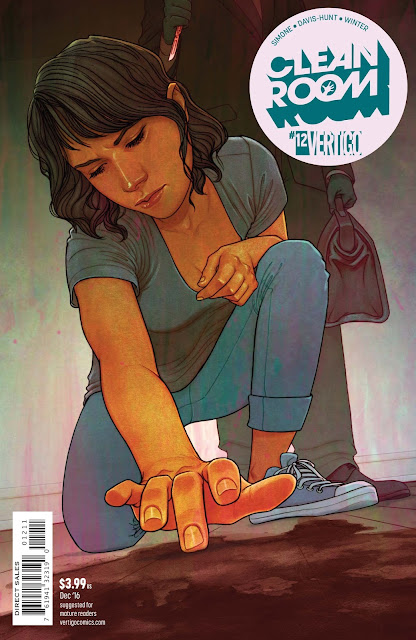 (W) Gail Simone (A) Jon Davis-Hunt (CA) Jenny Frison
Life as we know it drastically changes as Astrid fights not only for control of her organization but for the fate of humanity. Meanwhile, Chloe faces an internal struggle of morality: Does saving the world mean turning her back on her personal mission for truth and revenge? Find out in the cosmos-shattering conclusion of "Hell Above and Heaven Below"! 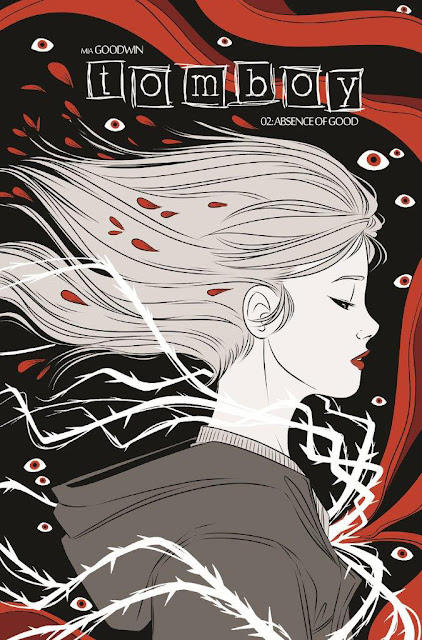 (W) M Goodwin (A/CA) M Goodwin
When Jessica is mistaken for the vigilante taking out the Ambidrex 20, Addison disobeys her grandfather's order to save her friend. The event leads Addison down a dark path from which she may not recover, however, as her attempt at heroism leads to a monstrous conclusion instead. 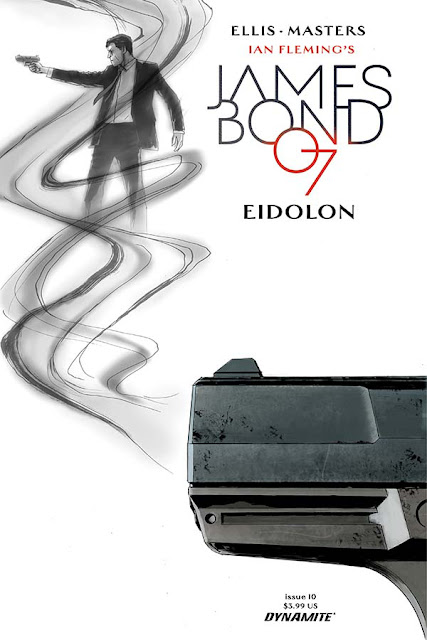 (W) Warren Ellis (A) Jason Masters (CA) Dom Reardon
EIDOLON, Chapter 4-MI6 is under attack from both hidden forces and Her Majesty's Government itself.  Why do MI5 and Whitehall want MI6 to be unable to defend itself?  Where is the terrifying Beckett Hawkwood?  What is EIDOLON? 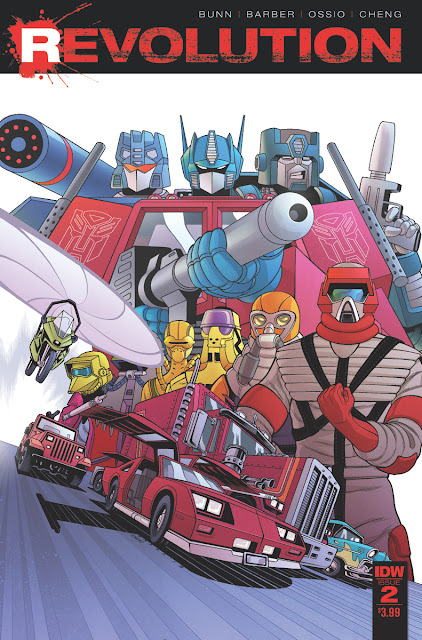 (W) Cullen Bunn, John Barber (A) Fico Ossio (CA) Tradd Moore
ROM-A MURDERER?! That's what OPTIMUS PRIME and the TRANSFORMERS think-and right or wrong, there's only one outcome: all-out war! Meanwhile, G.I. JOE turns to the one person who can save the world from ultimate destruction-MILES MAYHEM! 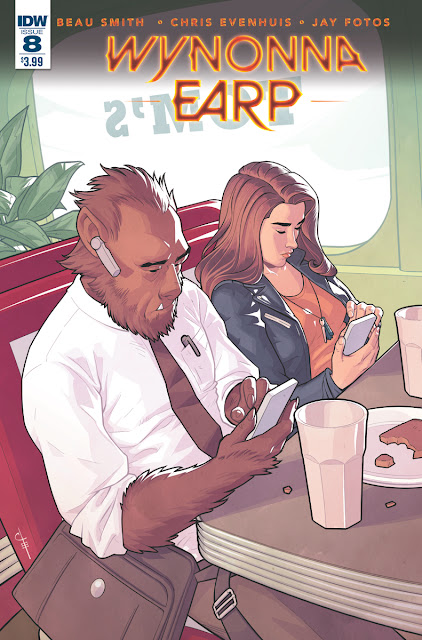 (W) Beau Smith (A/CA) Chris Evenhuis
Being a U.S. Marshal means you have to hunt down fugitives... but it also means that you have to protect informants in Witness Protection. For Wynonna Earp, that means she's gotta take care of Ira Robert Stevens A.K.A. iBob, former IT guy for the notorious White Werewolf Clan. 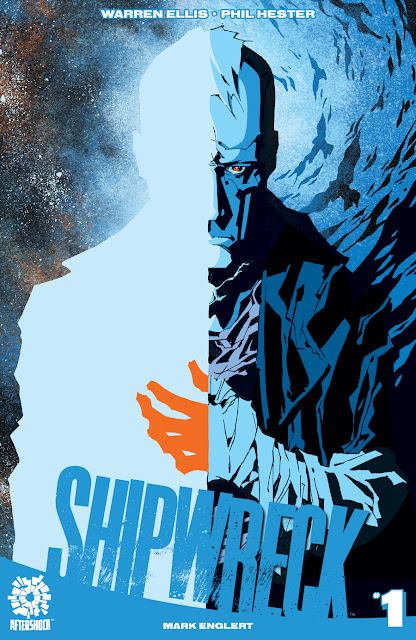 (W) Warren Ellis (A) Eric Gapstur (A/CA) Phil Hester
Dr Jonathan Shipwright, sole survivor of a very unusual and very secret shipwreck, doesn't know where he is. Seemingly trapped on an endless road, in pursuit of a saboteur who holds the key to his salvation -- or doom. Industry legend WARREN ELLIS joins AfterShock comics with this mysterious and captivating tale full of shock, secrets and surprises. 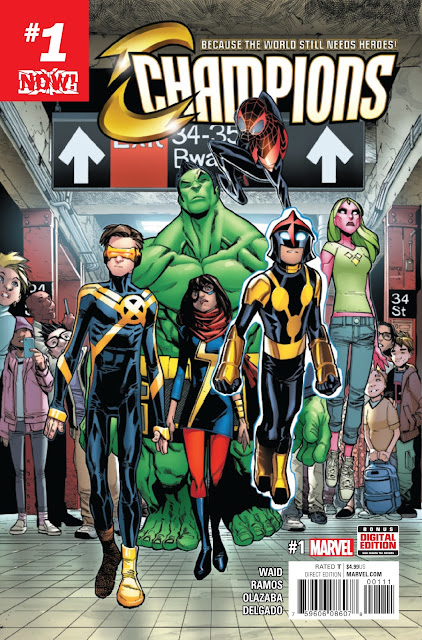 (W) Mark Waid (A/CA) Humberto Ramos
Following the fallout of CIVIL WAR II, Avengers Ms. Marvel, Nova and Spider-Man strike out on their own - joined by Cyclops, Viv Vision and the Totally Awesome Hulk! Six young heroes determined to change the world - and they're only the beginning!
Rated T 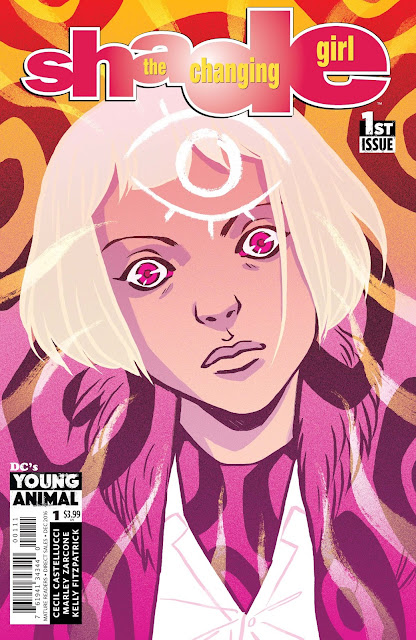 (W) Cecil Castellucci (A) Marley Zarcone (CA) Becky Cloonan
There's no such thing as a little bit of madness.
Far away on the planet Meta, Loma's going nowhere fast. She's dropped out of school, dumped her boyfriend, and is bored out of her mind.  She longs to feel things. That's where her idol, the lunatic poet Rac Shade, and his infamous madness coat come it. Loma steals the garment and makes a break across galaxies to take up residence in a new body: Earth girl Megan Boyer. Surely everything will be better on this passionate primitive planet with a dash of madness on her side and this human girl's easy life. Only now that she's here, Loma discovers being a teenaged Earth girl comes with its own challenges and Earth may not be everything she thought it'd be. Megan Boyer was a bully whom everyone was glad was almost dead, and now Loma has to survive High School and navigate the consequences of the life she didn't live with the ever-growing and uncontrollable madness at her side. Not to mention that there are people back on her homeworld who might just want Shade's coat back.
Written by Cecil Castellucci (THE PLAIN JANES, Moving Target: A Princess Leia Adventure), drawn by Marley Zarcone (EFFIGY) and overseen by Gerard Way, SHADE, THE CHANGING GIRL starts a whole new chapter in the story of one of comics' most unique series. 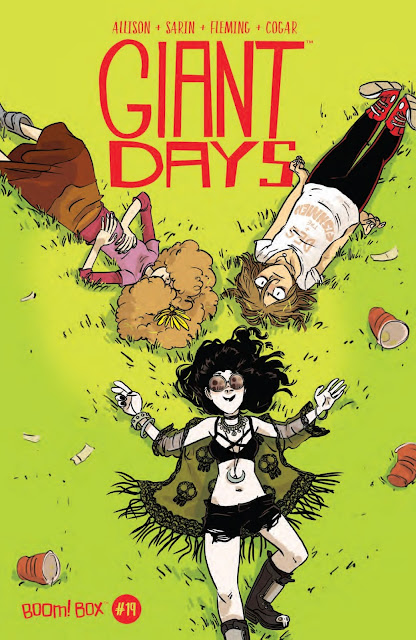 (W) John Allison (A) Max Sarin (CA) Lissa Treiman
After spending a dull summer apart, Esther, Daisy, and Susan attend a 3-day music festival that naturally ends in a battle for survival in an apocalyptic quagmire. 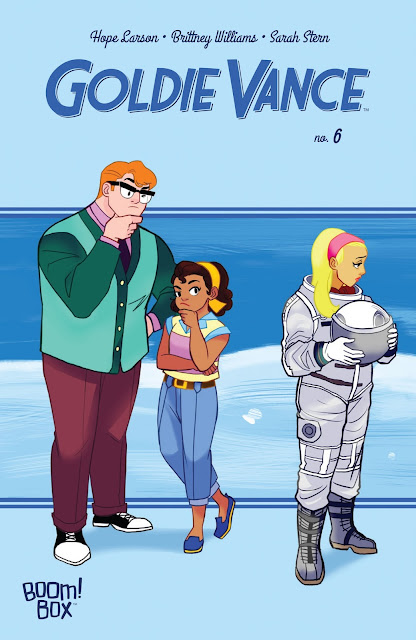 (W) Hope Larson (A/CA) Brittney Williams
During their continuing investigation of the sudden appearance of a lady astronaut on the beach, Goldie and Walter discover some interesting things about Cheryl. 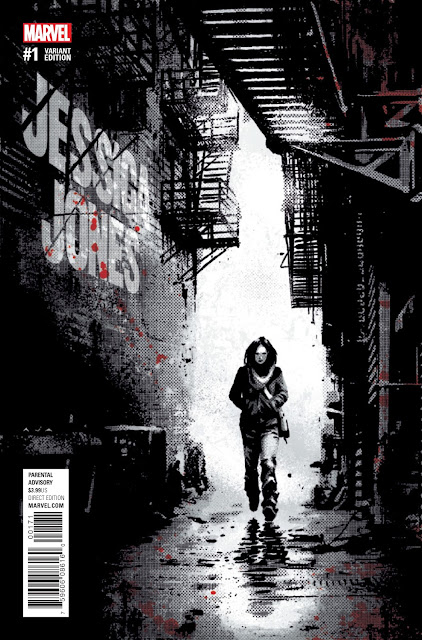 (W) Brian Michael Bendis (A) Michael Gaydos (CA) David Aja
She is back after a decade! A lot has changed in the Marvel Universe and there are still many secrets hiding in the shadows. Secrets only a special woman like Jessica Jones can hope to uncover. Discover the haunting secrets from Jessica's past in this blistering new series. Alias Investigations is open for business.
PARENTAL ADVISORY 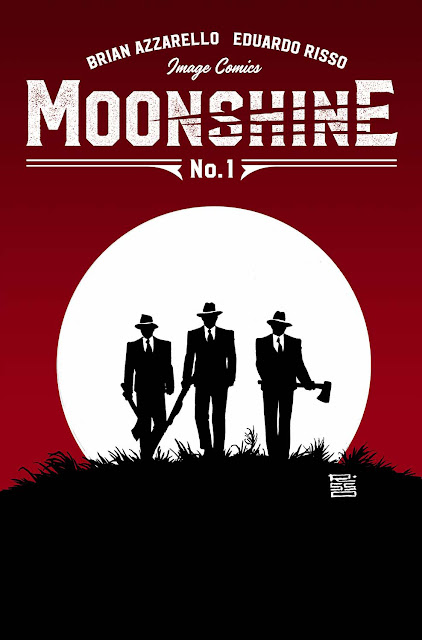 (W) Brian Azzarello (A/CA) Eduardo Risso
Set during Prohibition, and deep in the backwoods of Appalachia, MOONSHINE #1 tells the story of Lou Pirlo, a city-slick "torpedo" sent from New York City to negotiate a deal with the best moonshiner in West Virginia, one Hiram Holt. What Lou doesn't figure on is that Holt is just as cunning and ruthless as any NYC crime boss. Because not only will Holt do anything to protect his illicit booze operation, he'll stop at nothing to protect a much darker family secret...a bloody, supernatural secret that must never see the light of day... or better still, the light of the full moon.

MOONSHINE #1 marks the first time AZZARELLO and RISSO have worked together for Image Comics and reunites the Eisner Award winning creative team that defined modern crime comics with 100 Bullets... and now puts a horror-twist on a classic gangster tale. Issue #1 features a variant cover by legendary comics creator, Frank Miller! 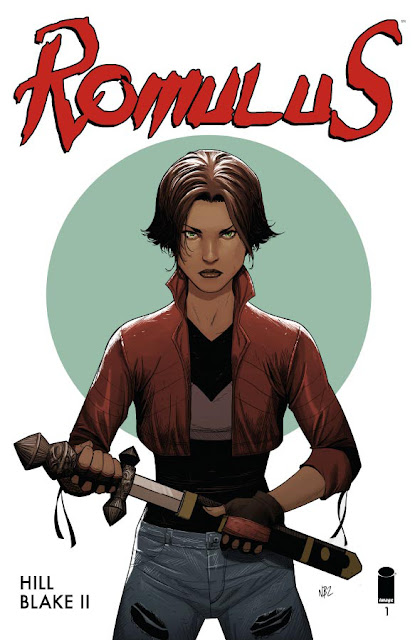 (W) Bryan Hill (A/CA) Nelson Blake
Our world isn't free. All of us, for generations, have lived under the secret control of The Ancient Order of Romulus. One young woman, raised by them, trained by them, betrayed by them, must push through her fear to take a stand against the silent evil that masters our world. Her name is Ashlar, and her war begins with the brutal first chapter of the new Image series ROMULUS, from writer BRYAN HILL (POSTAL) and artist NELSON BLAKE II (MAGDELENA). 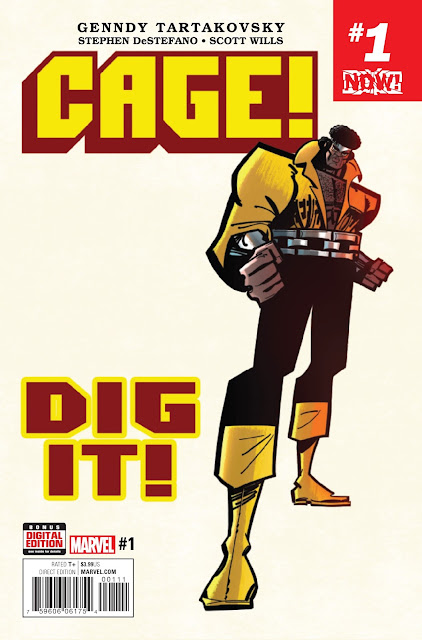 (W) Genndy Tartakovsky (A/CA) Genndy Tartakovsky
From the Award-Winning creator of Dexter's Laboratory, Samurai Jack and Hotel Transylvania! On the mean streets of Harlem, shoes are big, shirts are large, bottoms are belled and crime is rampant! But in the heart of the city, the world's hardest-working, smack-talking, chain-wearing super hero is on the street and on the case! And his rates are reasonable! He's CAGE! and he'll save your behind. Dig it!
Rated T+ 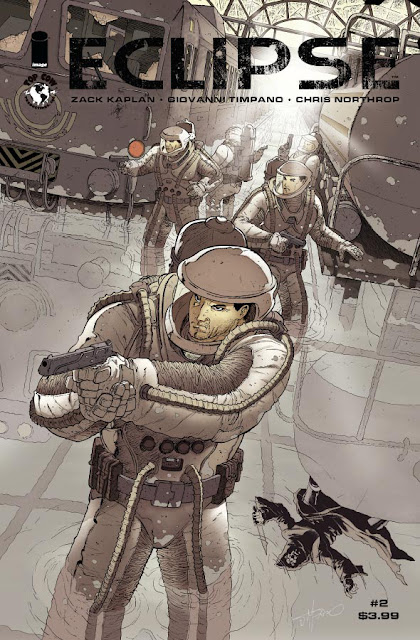 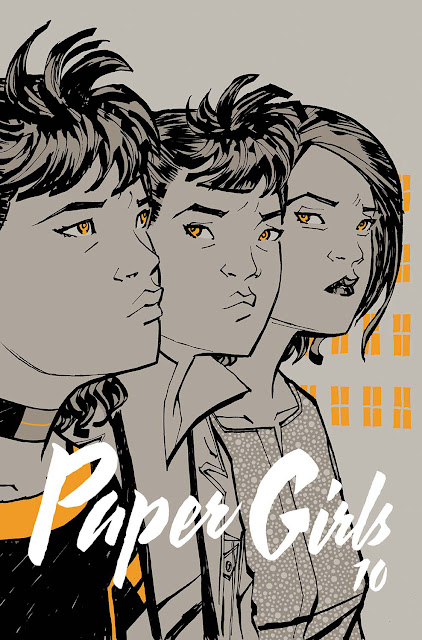 (W) Brian K. Vaughan (A/CA) Cliff Chang
The second arc of the smash-hit ongoing series concludes with the Paper Girls risking everything to escape the 21st Century... but if any survive, where will they end up next?