This is one of those weeks where you could live off Image Comics alone. There's plenty of great books from other publishers, don't get me wrong, but this week Image is concentrated dynamite. Monstress returns, Mark Millar and Greg Capullo launch the epic title Reborn, The Fade Out comes out in a deluxe edition, the latest Lazarus is out, Glitterbomb #2 arrives, Tokyo Ghost Vol. 2 trade is available for consumption, Kill or Be Killed by Ed Brubaker and Sean Phillips continues, Black Science, The Fix, Black Monday Murders, it's just too much good stuff.

Check out this week's other recommendations - Mosaic #1, Batgirl and The Birds of Prey #3, Belladonna #1, Jonesy #7, The Lost Boys #1, Super Human Resources TPB, and so much more. Also see and listen to the slideshow above featuring music from Kungs Vs. Cookin' On 3 Burners. Happy reading! 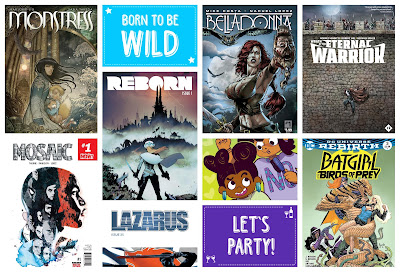 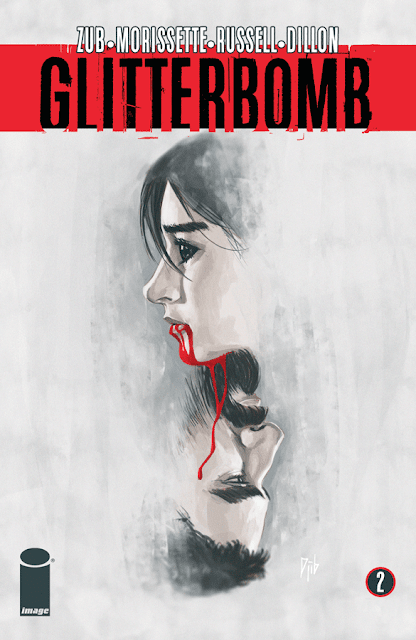 (W) Jim Zub (A) K. Michael Russell (A/CA) Djibril Morissette-Phan
Death, denial, and the darkness within. What's got into Farrah? 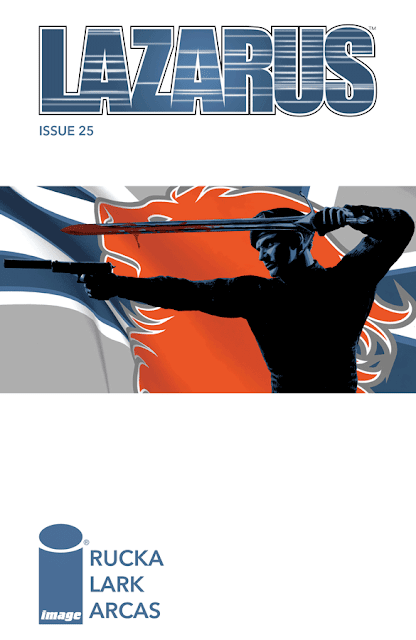 (W) Marjorie M. Liu (A/CA) Sana Takeda
NEW STORY ARC
Eisner-nominated MONSTRESS is back! Maika, Kippa, and Ren journey to Thyria in search of answers to her past... and discover a new, terrible, threat. 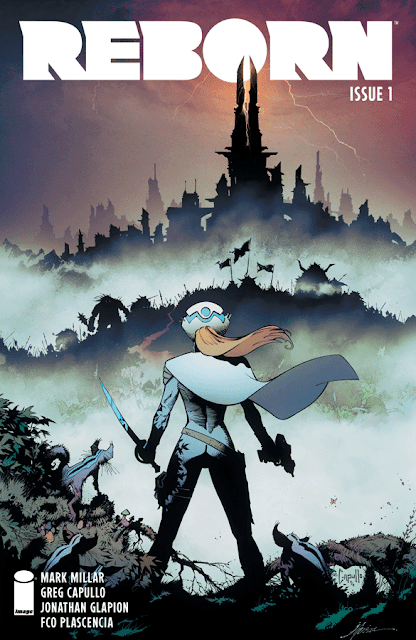 (W) Mark Millar (A/CA) Greg Capullo, Jonathan Glapion
MARK MILLAR & GREG CAPULLO join forces to create the smash hit sci-fi / fantasy story of the year: REBORN. Where do you go when you die? Not heaven or hell; somewhere else. Somewhere you have to fight to survive. Somewhere the people from the past are waiting for you-the good and the bad. 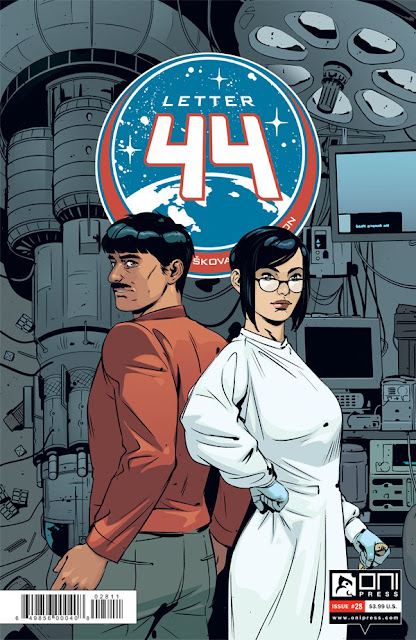 (W) Charles Soule (A/CA) Alise Gluskova
Special one-shot issue illustrated by Alise Gluškova (Abe Sapien)! A brilliant surgeon and a brilliant software engineer must be convinced to join a manned mission to the asteroid belt, crucial to the survival of the human race. The problem-it's a one-way trip, they both know it, and they both quite like their lives on Earth. Learn how Manesh Kalani and Kyoko Takahashi were recruited into the Clarke crew, in an issue designed to fill in crucial puzzle pieces in the Letter 44 saga! 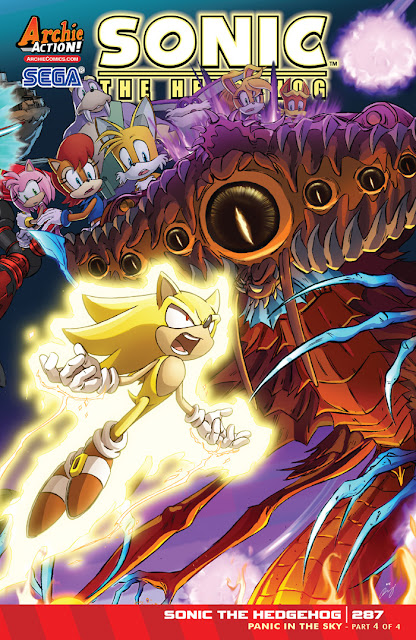 (W) Ian Flynn (A) Terry Austin, Diana Skelly (CA) Dan Schoening
"Panic in the Sky," Part 4. This is it - the cataclysmic clash and ferocious finale to the Shattered World Saga! Super Sonic leads Chip into battle against the dreaded Dark Gaia with the Freedom Fighters at ground zero! With the fate of the world at stake, who will actually be able to make it home? Featuring the fourth of four epic connecting covers by mega-talent Dan Schoening and a "Super" variant by full-time editor, first-time cover artist Vincent Lovallo! 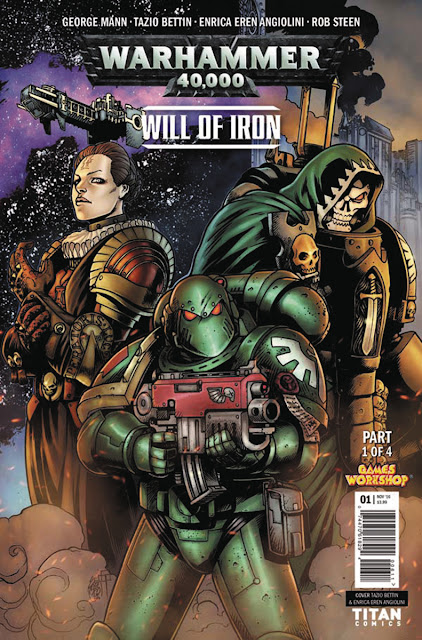 (W) George Mann (A/CA) Tazio Bettin
After a thousand years, violent warp storms have receded from the Calaphrax Cluster, and an ancient battlefront in the war against Chaos has again been opened to the universe. Now, multiple forces risk complete immolation to attack the sector, drawn by the lure of ancient relics, lost knowledge, and powerful megaweapons, buried for aeons. Chief among those forces, the fearsome Dark Angels, emerald-armored Space Marines, shock-troopers of the Emperor's Imperium and indomitable defenders of humanity. But Chaos stirs in the warp, and the Dark Angels will not be alone for long! Based in the universe of the ever-popular miniatures game, novels, and videogames, this new ongoing series is perfect for both the hardcore Warhammer 40,000 fan and the complete newcomer! 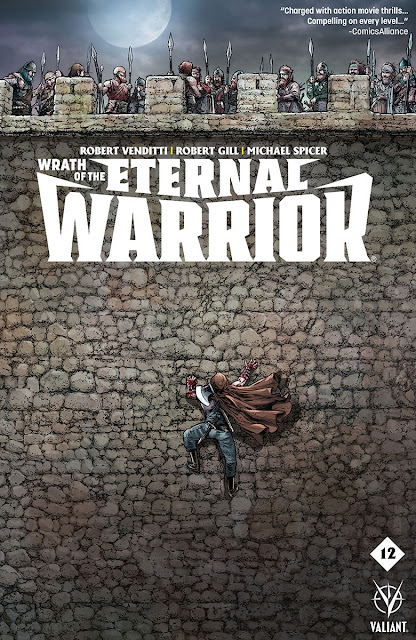 Enduring for centuries, but haunted by regret, the Eternal Warrior has trespassed against the nature of life and death...to restore the life of a son he lost centuries ago. Now, hunted by demonic forces in the space between this world and the next, Gilad has finally found the wayward boy that he has sworn to rescue from the edge of eternity, no matter what the price. But will the young man called Kalam come willingly to the father he never knew...or has the Eternal Warrior spawned a new enemy for the ages?
"A DEAL WITH A DEVIL" marches forward here as New York Times best-selling writer Robert Venditti (X-O MANOWAR) and acclaimed artist Robert Gill (BOOK OF DEATH) send the Eternal Warrior hurdling through the realm of the dead! 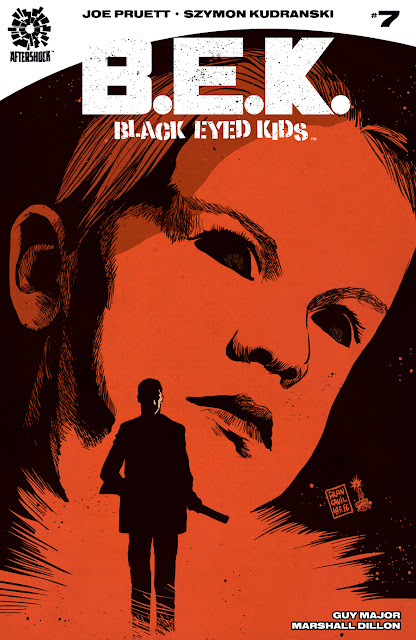 (W) Joe Pruett (A) Szymon Kudranski (CA) Francesco Francavilla
As the BEK army continues to grow, Meredith comes face-to-face with a childhood nightmare that causes her to question her entire past, while Jones finds out that the BEK do not make ideal threats. 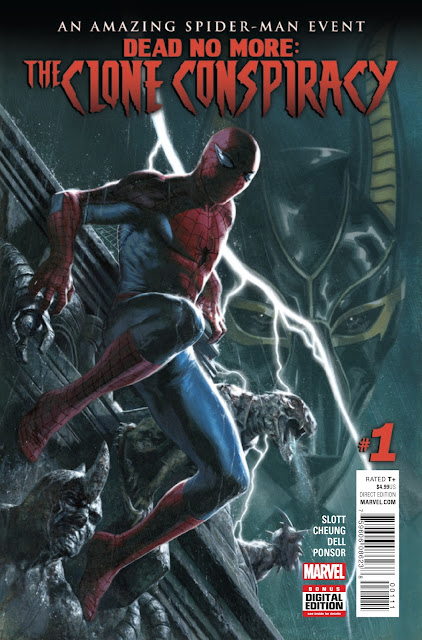 (W) Dan Slott (A) Jim Cheung (CA) Gabriele Dell'Otto
"DEAD NO MORE": The Jackal is back and has conquered death. The Amazing Spider-Man is outmatched by his classic enemy's army. Does the wall-crawler stand a chance? SHOULD he stand in The Jackal's way if he's found the key to eternal life?
RATED T+ 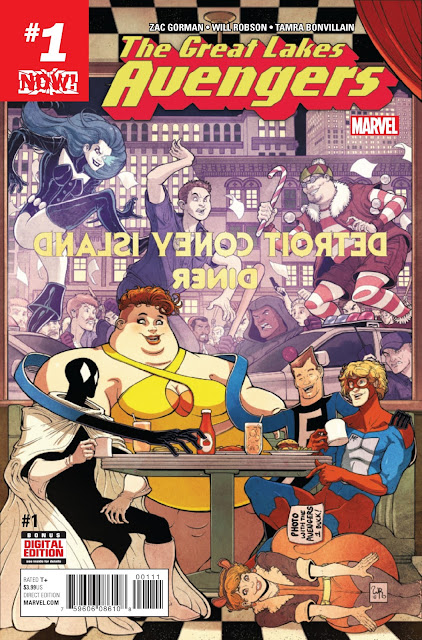 (W) Zac Gorman (A/CA) Will Robson
"All New, All Different?" No, thank you! New things are bad and different things are scary! Instead, why not join everybody's least favorite super-hero team, the Great Lakes Avengers in their brand new - but not too brand new - ongoing series, Same Old, Same Old, Great Lakes Avengers! When the team gets reinstated as permanent members of the Avengers and uprooted to Detroit, the GLA has one more shot at super hero glory...but can they answer the call? Do they even have 4G coverage here? Find out!
Rated T+ 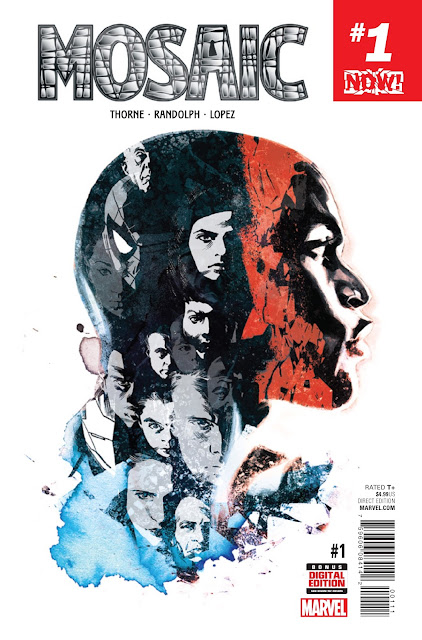 (W) Geoffrey Thorne (A) Khary Randolph (CA) Stuart Immonen
SPECIAL OVER-SIZED ISSUE!
Professional basketball player and world renowned celebrity, Morris Sackett, gains extraordinary abilities, at the grave cost of his own mortal body. Imbued with the ability to jump from person to person like a ghost, he controls the bodies and memories of those he inhabits. With his own body destroyed, the one-time superstar athlete must rely on others to survive. The saga of the newest Marvel Inhuman MOSAIC begins here!
Rated T+ 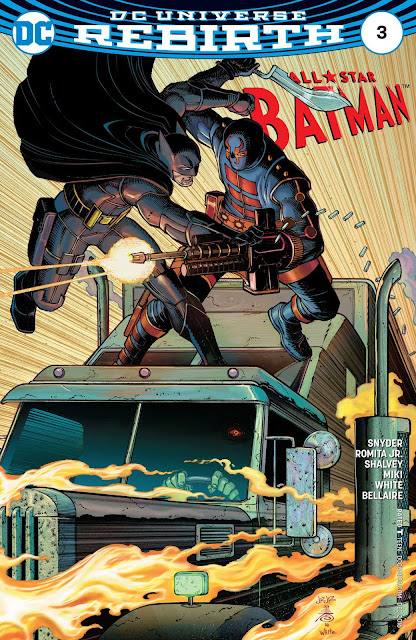 (W) Scott Snyder (A) Declan Shalvey (A/CA) John Romita, Danny Miki
"MY OWN WORST ENEMY" part three! Now on the run from both bounty hunters and cops, Batman and Duke must find a safe place to hide out with Two-Face before they can continue their journey to the cure. Batman might soon realize his worst nightmare: that Two-Face is right...and nowhere is safe. 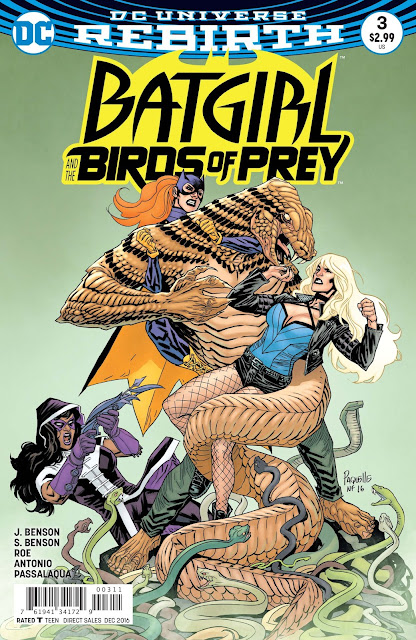 (W) Julie Benson, Shawna Benson (A) Claire Roe (CA) Yanick Paquette
"WHO IS ORACLE?" part four! The dangerous new Oracle is finding that Gotham's mobs aren't up to the task of keeping the Birds of Prey off the scent...so send in the Snakes! Copperhead, The Asp, Cottonmouth, and Lady Viper are the most venomous foes the Birds have ever faced! 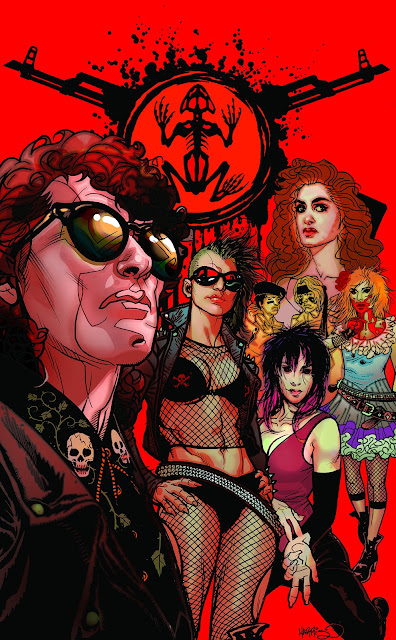 (W) Tim Seeley (A) Scott Godlewski (CA) Tony Harris
The stakes are raised in this nostalgic and unstoppable sequel to the '80s cult classic vampire film, The Lost Boys. Veteran horror writers Tim Seeley (GRAYSON, NIGHTWING, Hack/Slash), and Scott Godlewski (THE DARK & BLOODY, Copperhead) deliver a gruesome and stylish return to the bloody boardwalks and big hair of 1987!
Santa Carla, California is on edge. The eccentric coastal town and haven for the undead was finally returning to "normal" after its last supernatural scuffle left the local coven's head vampire dead and gave newcomers Michael and Sam Emerson a housewarming both violent and bizarre. Now the brothers must once again team up with militant vampire hunters Edgar and Allan Frog when a new gang of ruthless, stunning, life-sucking nightcrawlers known as the Blood Belles emerges from the aftermath to collect Michael's love interest and their lost sister, Star. 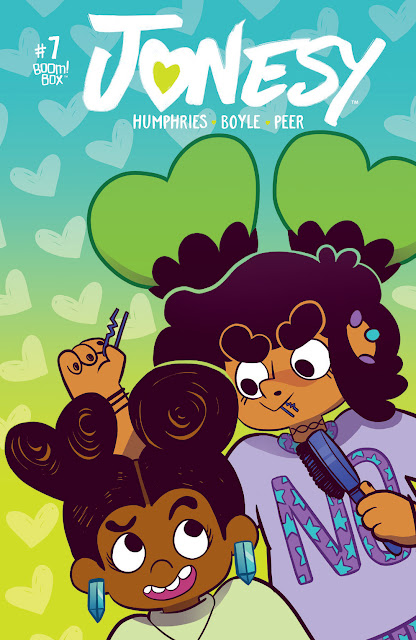 (W) Sam Humphries (A/CA) Caitlin Rose Boyle
It's a race to the concert! Will Jonesy and Susan make it to Stuff? Or will Jonesy's love powers be their undoing? 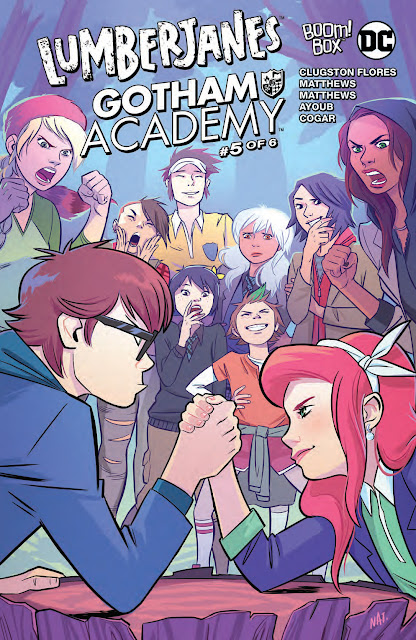 (W) Chynna Clugston-Flores (A) Kelly Matthews, Nichole Matthews, Jenna Ayoub (CA) Natacha Bustos
The Lumberjanes and Gotham Academy kids have to fight it out with the chaperones when Louise has a temper tantrum. 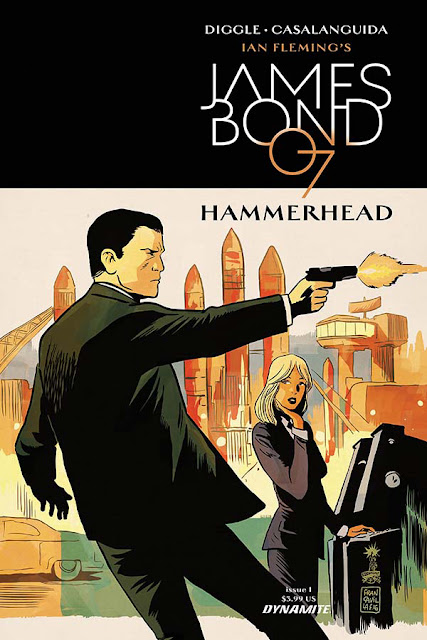 (W) Andy Diggle (A) Luca Casalanguida (CA) Francesco Francavilla
Bond is assigned to hunt down and eliminate Kraken, a radical anti-capitalist who has targeted Britain's newly-upgraded nuclear arsenal. But all is not as it seems. Hidden forces are plotting to rebuild the faded glory of the once-mighty British Empire, and retake by force what was consigned to history. 007 is a cog in their deadly machine - but is he an agent of change, or an agent of the status quo? Loyalties will be broken, allegiances challenged. But in an ever-changing world, there's one man you can rely on: Bond. James Bond. 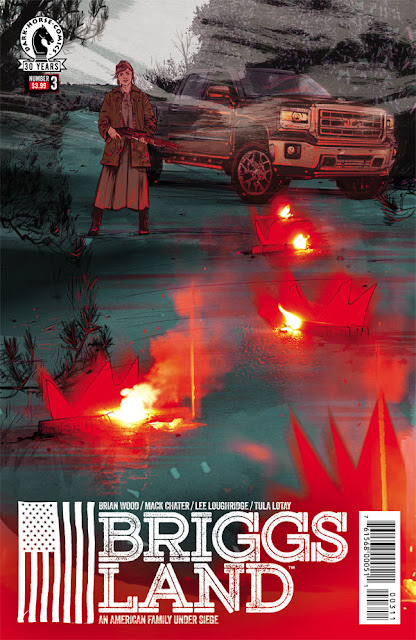 (W) Brian Wood (A) Mack Chater (CA) Tula Lotay
On a quiet highway in the predawn light, Grace encounters a true test of her empathy and her strength when she comes face to face with the worst aspects of the community she's struggling to take back. 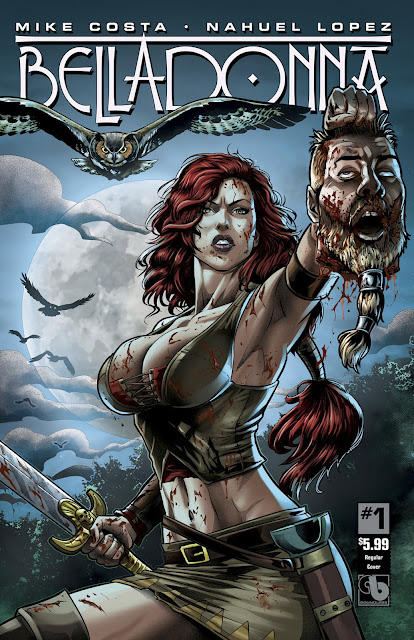 (W) Mike Costa (A/CA) Nahuel Lopez
In an age of iron and stone, one woman's fury would inspire a ferocious band of female warriors to rise up against the evils of the land.  Mike Costa (God is Dead) returns to the fiery femme fatale that took comics by storm with a tale ripped from the pages of fantasy.  The unstoppable warrior queen has tracked down the sorceress that has been plaguing the land but her sensual powers are able to pit both magic and monsters against those who dare to defy her.  Prepare for a powerful risque fantasy tale set in an age of warriors and wizards!  Belladonna combines the best of classic swords and sorcery with a sexy hard edge that you can only find in Boundless Comics!  We offers a host of sexy stunning covers with this issue including a Regular Cover &Wraparound Covers by series artist Nahuel Lopez, Shield Maiden by Matt Martin, Blood Lust by Raulo Caceres, and Killer Body Cover by Renato Camilo.  Plus an array of super limited covers for the collector including a Century Nude set of six covers (limited to 100 copies each) by Paulo Siquiera, a three-book Costume Change Set (limited to 250 sets) and three-book Nude & Naughty Set (Limited to 350 sets) both by Christian Zanier. And for the erotic art collectors, there are Nude, & Wraparound Nude Covers by Lopez, Shield Maiden Nude by Martin, Blood Lust Nude by Caceres, and Killer Body Nude Cover by Camilo!  To top it off, there is a Topless Leather cover by Ron Adrian!   To see the uncensored covers, please visit ww.boundlesscomics.com. 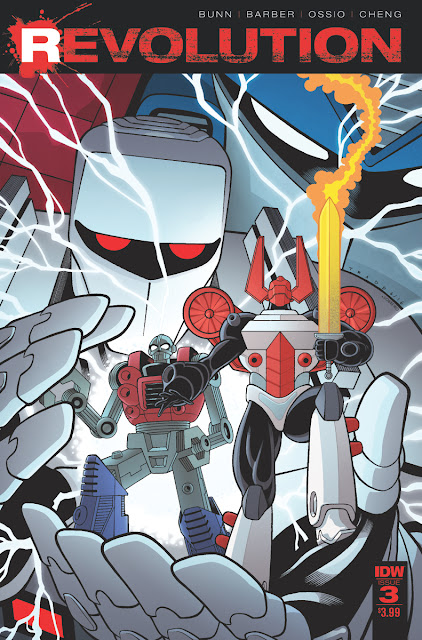 (W) Cullen Bunn, John Barber (A) Fico Ossio (CA) Tradd Moore
THEY CAME FROM MICROSPACE! What terror reaches through the tendrils of entropy into our universe-and why does ROM want to kill it? Meanwhile, M.A.S.K.'s MATT TRAKKER makes a startling discovery about the TRANSFORMERS-but will G.I. JOE's SCARLETT believe him? 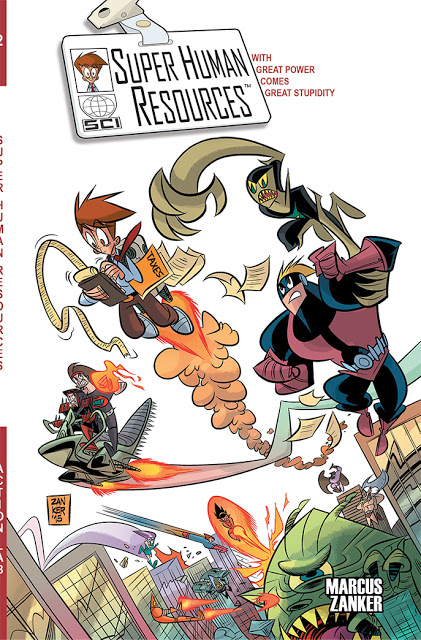 (W) Ken Marcus (A/CA) Armando M. Zanker
Welcome back to the HR department of the world's greatest super team. Tim from Finance soon discovers that Super Crises International has been infiltrated by sinister forces. And stupidity. Lots of stupidity. Collecting all four issues of the sequel to the sold-out, smash indie hit.

QUOTE: "Super Human Resources weaves the outsized antics of the super-powered and the travails of the ordinary with endless cleverness and invention."
- JAVIER GRILLO-MARXUACH (The Middleman) 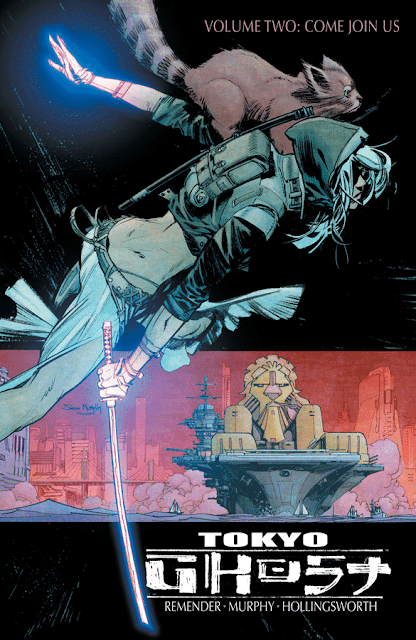 (W) Rick Remender (A/CA) Sean Murphy
ADVANCE SOLICIT
Following the destruction of the Garden Nation of Japan, Constable Led Dent returns to his brutal beat, having succumbed to his inner demons. But as he stalks the streets of the Isles of Los Angeles, enforcing the corporate new world order, he's haunted by a ghost from Tokyo.
Collects TOKYO GHOST #6-10