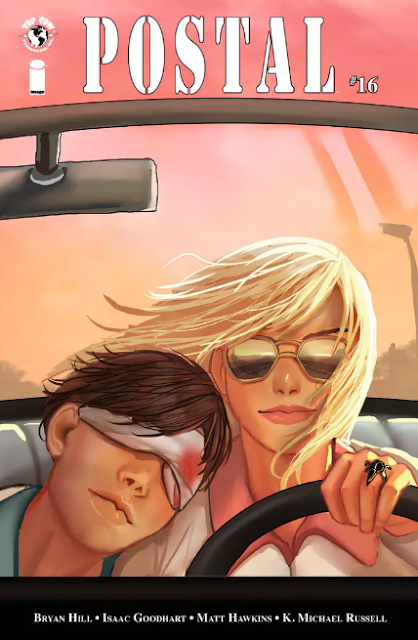 There is a saying that goes "adversity doesn't build character it reveals it." It wouldn't be a safe haven for criminals called Eden if it didn't have its share of adversity. What it reveals in this explosive issue is that Mayor Shiffron has a heart, Maggie is ruthless, and Mark wields more power than he thought. 'Postal' #16 has the ultimate showdown between Eden and the Aryan Brotherhood. Spoiler alert: there will be blood.

The beauty of this bloody confrontation that's been building in the series between neo-nazis and the guardians of Eden is that it comes to a head in one easy to follow issue. Meaning you didn't have to have read the previous issues (but you should totally do that) to understand what's at stake. As an avid reader of 'Postal,' some things should surprise you but not the precision with which Bryan Hill unfolds the story.

He takes a familiar set-up to a shootout and is able to develop his characters in deeper ways than we've seen. He peels away a new layer that kind of changes the dynamics between Mark, his mom, Maggie, and surprisingly Molly. The interaction between Curtis and Rowan from abrasive to cooperative and beyond was delicately handled because it could have gone real corny real quick. And as dramatic and gruesome as the battle was it was brief and straightforward. This was more about revealing the grit of these characters under stress, changing them from this point on and as we see in the final pages, Mark may have changed the most.

None of it works without the great art from Isaac Goodhart and K. Michael Russell. Goodhart continues to impress with confident and dynamic layouts that drive the action forward, making the simplest of dialogue-heavy scenes flow smoothly and paced perfectly. Russell's colors pop against mostly dark backgrounds giving each scene its own bold color scheme. I've read the series from the beginning and I can say the art gets better as it goes on.

'Postal' continues to deliver big cinematic action and great dramatic tension with a cast of dubious characters. It's a testament to Hill's talent of adding new facets to the personalities of Eden's protectors. With Goodhart and Russell providing amazing art, 'Postal' continues to be a must-read.