WATCH: Lynda Carter is in Danger as the President on the Next 'Supergirl'

I would vote for former Wonder Woman Lynda Carter for president of the United States right now if I could but I'll have to settle to see her play the role on next week's episode of  CW's 'Supergirl,' Welcome to Earth.

Synopsis: An attack is made on the President (guest star Lynda Carter) as hot-button, alien vs. human rights issues heat up in National City. Supergirl (Melissa Benoist) and the DEO are assigned to protect the President and bring in the responsible party. Alex (Chyler Leigh) teams up with Detective Maggie Sawyer (Floriana Lima) to investigate the case while Kara searches for a recently escaped Mon-El (Chris Wood), who she fears may be the alien behind the assault. Rachel Talalay directed the episode written by Jessica Queller and Derek Simon.

In the clip above, Kara (Melissa Benoist) eagerly awaits the arrival of the President when she comes under mysterious fire from an alien assailant. Kara springs into action to protect her. Later, the Prez and Hank Henshaw (David Harewood) have a philosophical difference about her plan to offer aliens equal rights under federal law.

Also making her first appearance is Floriana Lima as Detective Maggie Sawyer who works for the D.E.O. in the comics but will be from the National City P.D. specializing in meta-human activity on the show. Her backstory will change somewhat but producers have promised to keep her origins as an out lesbian officer intact.

Supergirl airs on Mondays on the CW at 8 p.m. ET. 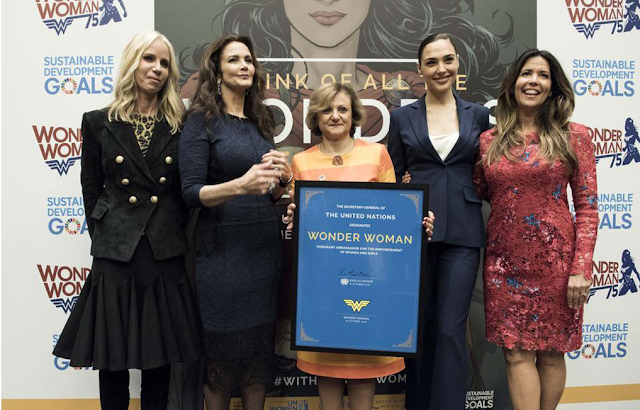 Under-Secretary-General for Communications and Public Information Cristina Gallach (center), at the designation of Wonder Woman as the Honorary Ambassador for the Empowerment of Women and Girls. UN Photo/Kim Haughton