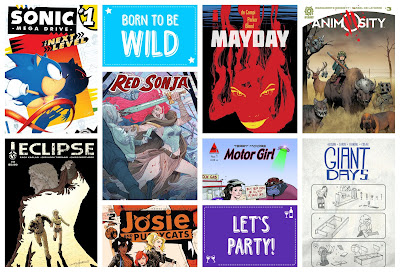 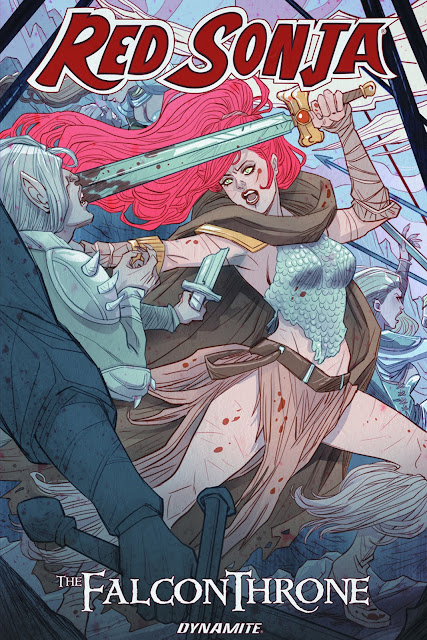 (W) Marguerite Bennett (A) Aneke (A/CA) Marguerite Sauvage
Across the plains of Hyrkania, a message sweeps through the scattered peoples of the nation. Bells ring, horns blow, voices shout -- the King is dying! Red Sonja rides to save the King from his doom as the powers of Hyboria crowd around to strike when the kingdom is weakest. But a dread new power rises from within Hyrkania's own borders, bent on defending its homeland... no matter the cost, no matter what its people become. A defining chapter of the Red Sonja saga, dark, clever, vicious, and funny, as the She-Devil with a Sword must stop the rise of a brutal new regime: her own people! 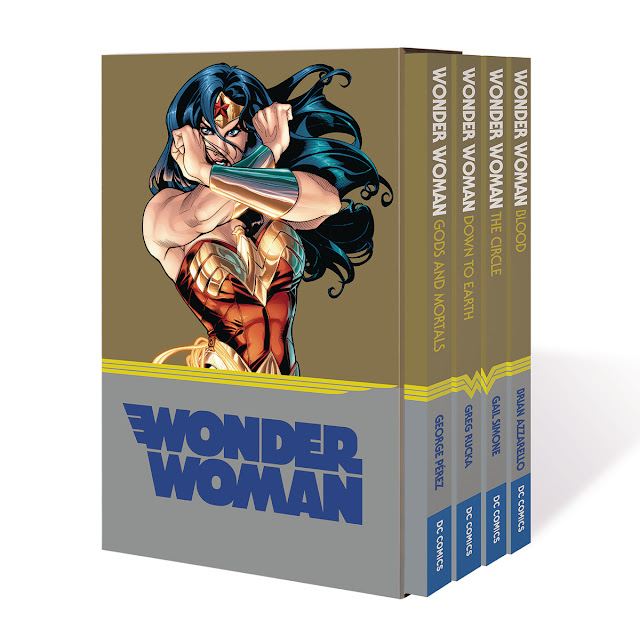 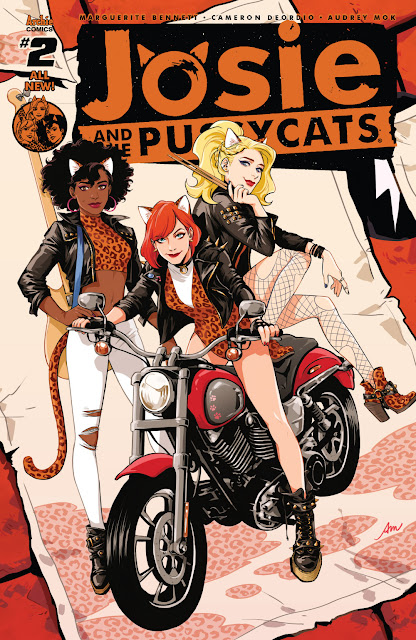 (W) Marguerite Bennett, Cameron Deordio (A/CA) Audrey Mok
As the girls look to play their first gig outside Riverdale, they run into some unexpected complications. Can they bust up a crime ring, help the criminals see the error of their ways, and jump-start the band's music career, all through the power of rock, friendship, and, Melody assures us, entirely legitimate comic book science? You'll have to read to find out! 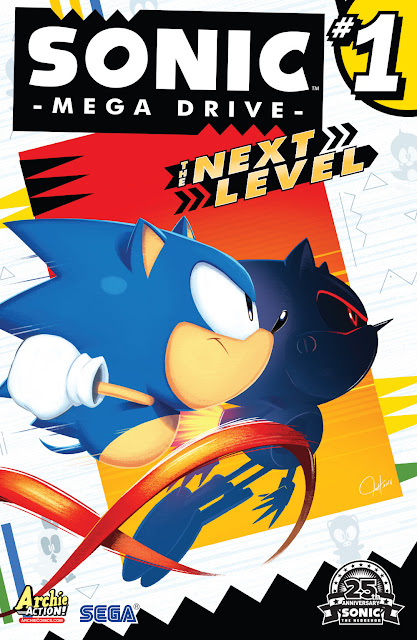 (W) Ian Flynn (A) Matt Herms (A/CA) Tyson Hesse
Welcome to "The Next Level." The sequel to the hit Sonic: Mega Drive is here! Picking up right where things left off Sonic, Tails, Amy Rose and Knuckles are on the hunt for the Ancient Gears and on the move to stop Dr. Eggman's latest scheme! But not everything runs like clockwork when Sonic breaks away to do his own thing. And Dr. Eggman has a certain high-speed robot up his sleeve. You can't miss out on this exciting new installment in the Sonic Mega Drive series! 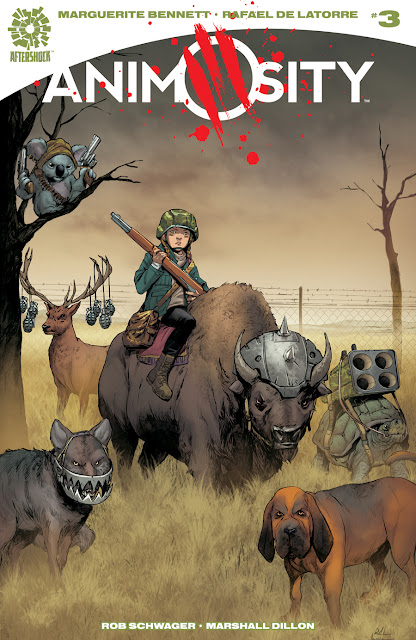 (W) Marguerite Bennett (A/CA) Rafael de Latorre
Caught between the ruins of the human militia and the rise of the Animilitary, the Bloodhound Sandor and his human daughter Jesse encounter unlikely allies and cunning traitors, but are haunted by the horrors that brought them here... 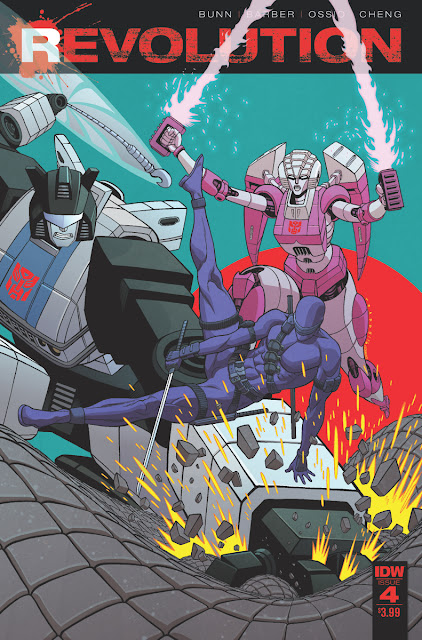 (W) Cullen Bunn, John Barber (A) Fico Ossio (CA) Tradd Moore
SILENT INTERLUDE! One human has the skill to break into AUTOBOT CITY-but what is SNAKE EYES going to do when he finds himself face-to-knee with OPTIMUS PRIME? And outside, MILES MAYHEM and the M.A.S.K. team wait to see who walks out alive... 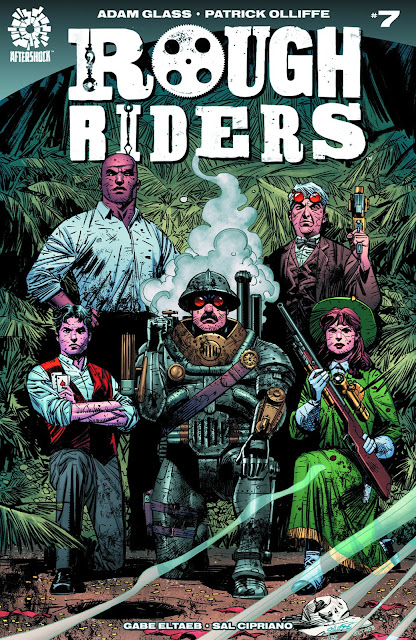 (W) Adam Glass (A) Pat Oliffe (CA) Pat Olliffe
What a long, strange trip it's been for Teddy Roosevelt and his Rough Riders as they close this chapter of their journey and save the world from a threat like it has never seen before. But there is a price to pay and people back home to hold responsible.
Blood is spilled and the Rough Riders will never be the same again because of it. Who will survive? Who will die? And who will live to tell this story? 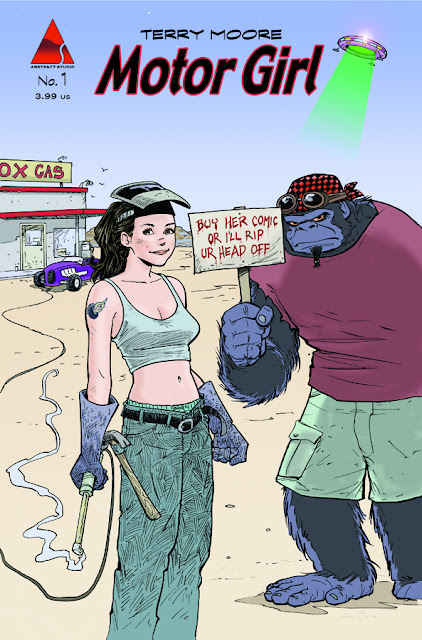 (W) Terry Moore (A/CA) Terry Moore
First Issue! When Samantha's junkyard is visited by a UFO looking for spare parts, she is only too happy to oblige. But when word gets out she is a reliable source, Sam's booming alien business catches the attention of an Area 51 investigator determined to shut her down! Don't miss the premier issue of Terry Moore's fantastic new series! 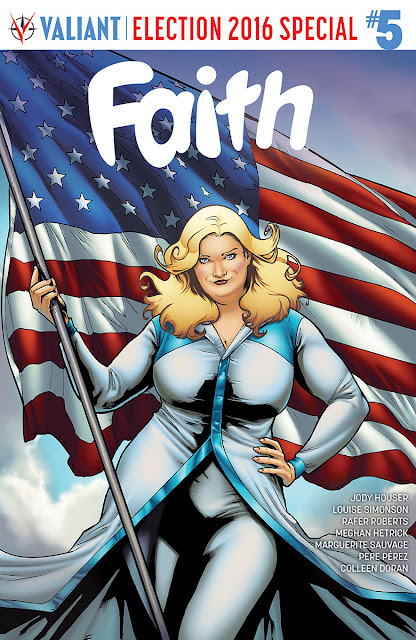 (W) Jody Houser, Louise Simonson, Rafer Roberts (A) Pere Perez, Colleen Doran, Meghan Hetrick (CA) Carmen Nunez Carnero
On November 2nd, just days before Election Day 2016, legendary writer Louise Simonson and Harvey Award-nominated artist Pere Perez present history in the making with a presidential milestone like no other! Faith Herbert, star of the highest selling independent superhero debut of 2016, is a shining beacon of optimism in a challenging world. Her day job as a blogger and journalist is about to bring Faith face to face with Democratic Presidential nominee Hillary Clinton...but its her daring alter ego as Los Angeles' leading superhero that will have to save the day when a new threat emerges to imperil a pivotal moment that has all of America watching!
Plus, also coming in the oversized, 48-page FAITH #5 election special: Faith's adventures continue with an all-new lead story by the ongoing creative team of writer Jody Houser (Orphan Black) and new series artist Meghan Hetrick (Red Thorn), as well an exclusive prelude to HARBINGER RENEGADES #1 - featuring the long-awaited return of Faith's beloved superteam -by writer Rafer Roberts (A&A: THE ADVENTURES OF ARCHER & ARMSTRONG) and artist TBD! 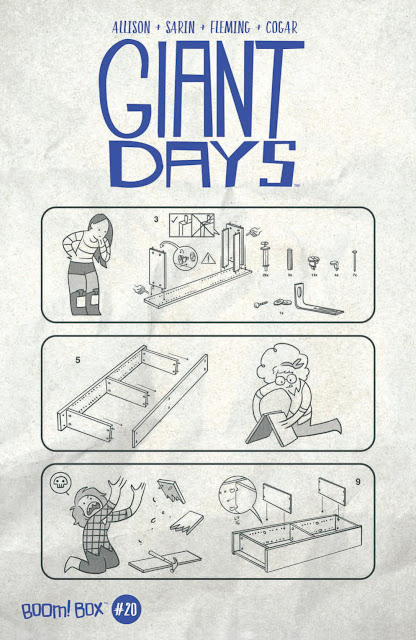 (W) John Allison (A) Max Sarin, Liz Fleming (CA) Lissa Treiman
The second year begins! When Esther, Daisy and Susan discover that every piece of furniture in their new home was destroyed by the previous occupants, they head to IKEA, where things get complicated. 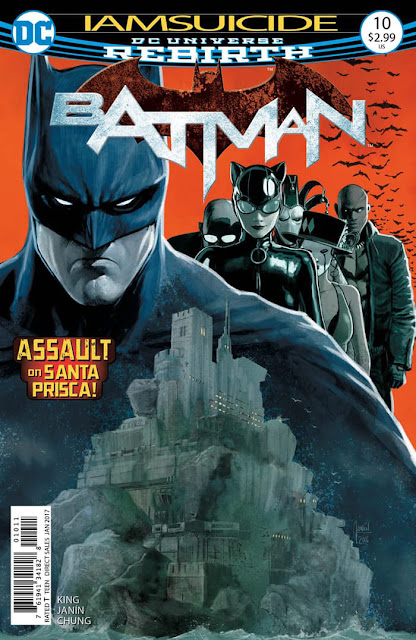 (W) Tom King (A/CA) Mikel Janin
"I am Suicide" part two! Batman now has his team, but are they ready for the most dangerous mission of their lives? As the Dark Knight prepares his squad to infiltrate Santa Prisca, he may find that it's up to him alone to face Bane. 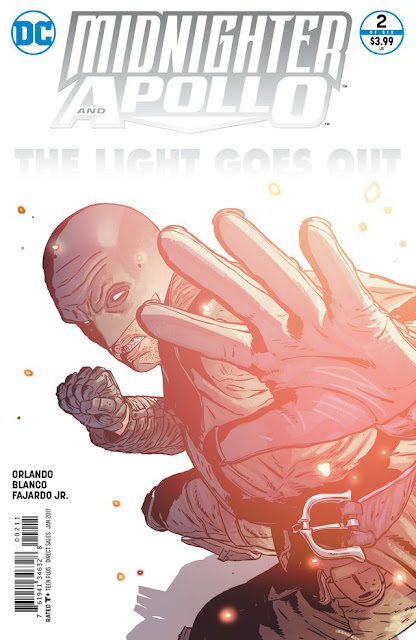 (W) Steve Orlando (A) Fernando Blanco (CA) Aco
Midnighter's got Henry Bendix in his hands at last-but will he have to let him go in order to join Apollo's battle against the deadly Mawzir? 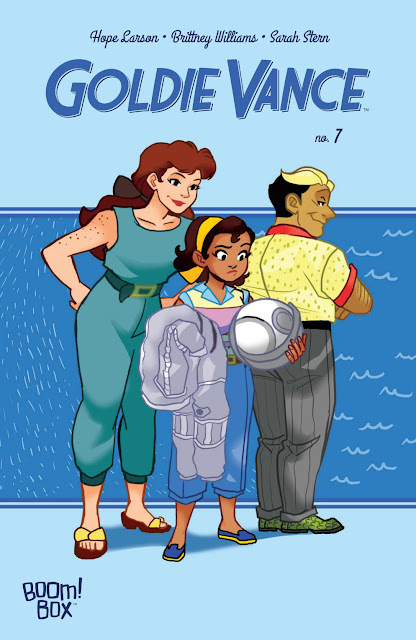 (W) Hope Larson (A/CA) Brittney Williams
Goldie and Walter have to hit up the local dive shops for scuba gear to catch up with Millie and Cheryl. 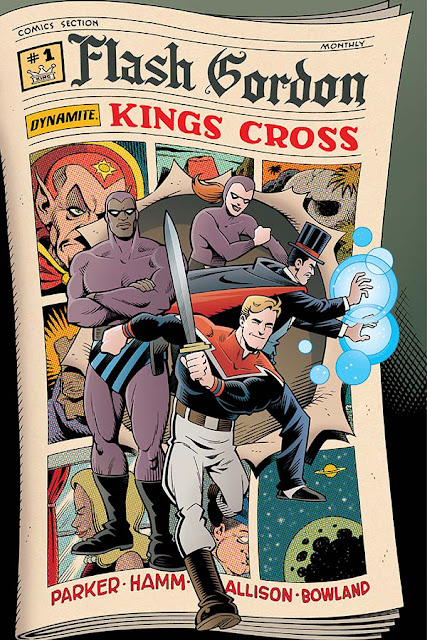 (W) Jeff Parker (A) Jesse Hamm (CA) Roger Langridge
Superstar JEFF PARKER (Future Quest) returns to FLASH GORDON, alongside the astounding team of JESSE HAMM & GRACE ALLISON! Flash, Mandrake The Magician & The Phantoms struggle to bring peace to a broken Earth...but a FAR-too-familiar foe from beyond threatens to destroy everything they hold dear! 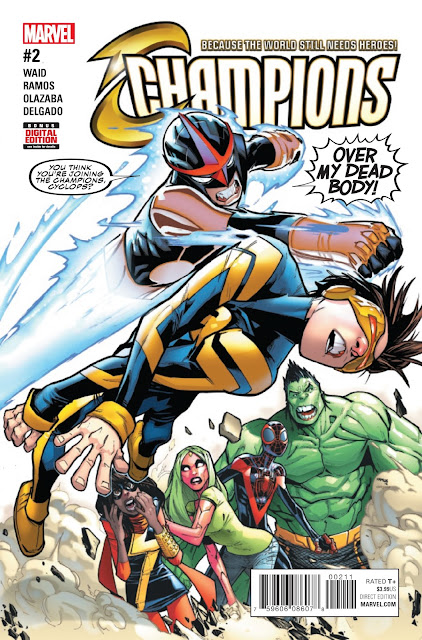 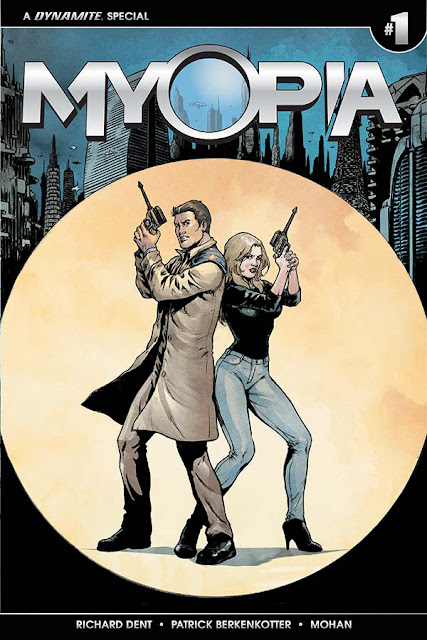 (W) Richard Dent (A) Patrick Berkenkotter (CA) Cezar Razek
Based on an award-winning story by writer Rich Dent, "Myopia" merges speculative fiction and steampunk into a thrilling alternative reality.  Armed with a special set of lenses that make him almost invisible inside the Central Lens Network, James Chase sets out on a mission to stop the new world order's violation of the Magnetic Energy Agreement.  At first sold as a device to make life more convenient, the lens now works as a tool for the government to hide the devastation unleashed from excessive mining of the earth's core. Myopia migrated over from a successful Kickstarter supported by George R.R. Martin, Neil Gaiman, Margaret Atwood, Dean Koontz, and Jim Butcher.  Don't miss this debut issue! 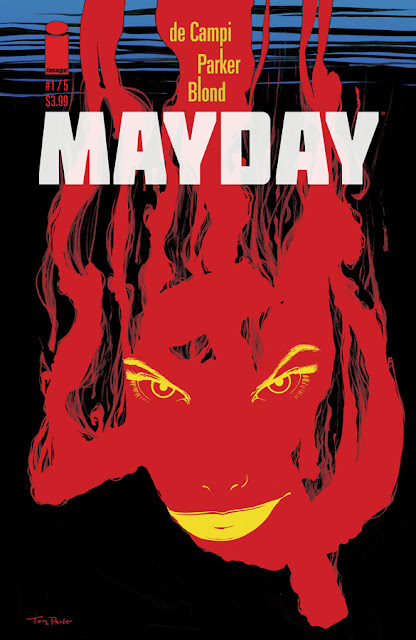 (W) Alex De Campi (A) Blond (A/CA) Tony Parker
SERIES PREMIERE
A Cold War action-thriller like no other. It's 1971, and two young Soviet operatives are sent to California to kill a defector and recover top-secret information. As the mission falls apart into a mess of good sex, bad drugs, and ugly violence, the young Russians are faced with a dilemma: they need to rely on each other to escape America, but they must betray each other to survive Russia. By critically-acclaimed thriller writer ALEX DE CAMPI with art by TONY PARKER and BLOND. 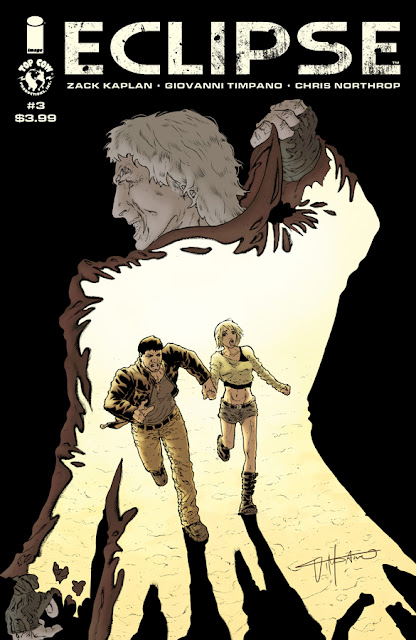 (W) Zachary Kaplan (A/CA) Giovanni Timpano
Not only does Bax get closer to understanding just how the city's mysterious killer avoids burning in the deadly sunlight, but also with Cielo's help, he learns more about the city's secrets and the killer's origins. But will it be enough to help Bax protect her before the killer strikes again? 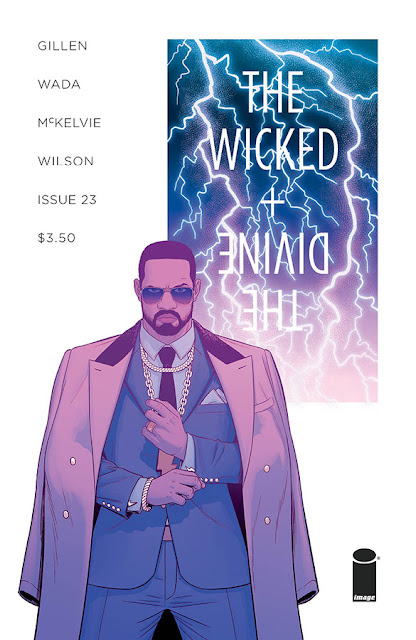