After an...interesting week last week, thank goodness we have comic books to distract us from the madness of real life. This week is especially strong with some great stories guaranteed to transport you out of your stressful reality.

Image Comics has a number of books you should check out. Among them are Reborn, Moonshine, Horizon, The Hunt, and more. If you're a fan of the band KISS, Amy Chu and Kewbar Baal are back with the second issue. Batman is always a winner, Black Panther is too, and don't forget about Archie, Lady Killer, and Jackpot. One of our highest recommendations is Valiant's Harbinger Renegade #1. A fantastic new series for brand new fans and old with an explosive issue that brings back superteam awesomeness.

This week's slideshow honors the passing of legendary singer/songwriter Leonard Cohen with a cover of "First We Take Manhattan" by R.E.M. Happy reading! 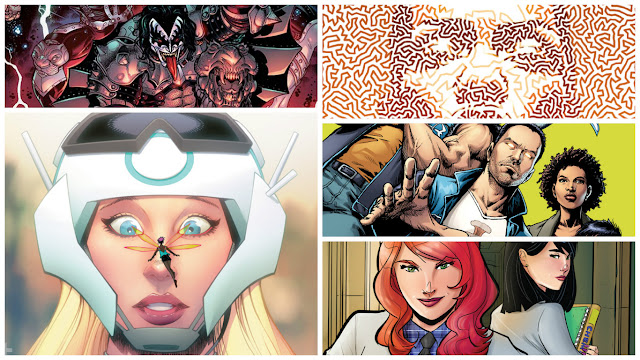 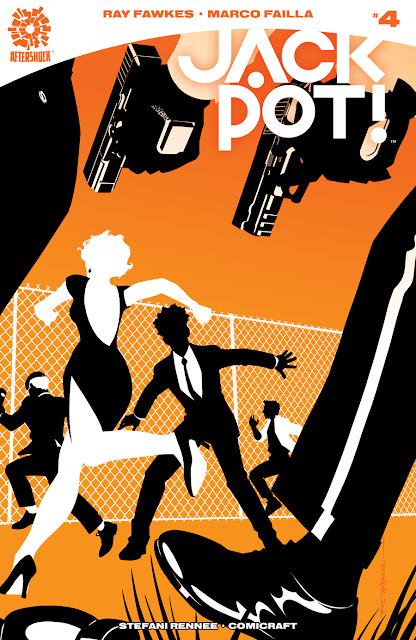 (W) Ray Fawkes (A) Georges Duarte (CA) Brian Stelfreeze
It's time to unmask the power that's been toying with the JACKPOT! crew--and to show them what a huge mistake they've made. It's time for things to get messy. Real messy. But somebody's been planning for this all along, and when they pull this one out of their hat, it's REALLY going to kill 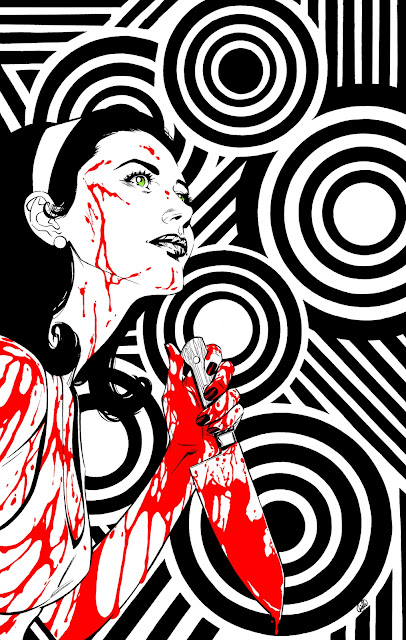 (W) Jo?lle Jones (A/CA) Jo?lle Jones
Life in Florida gets a little twisted for Josie when she learns about the dark past of her mother-in-law and the connection to her new partner. 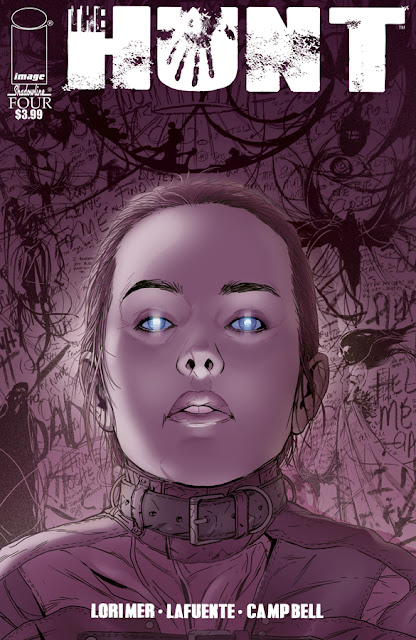 (W) Colin Lorimer (A/CA) Colin Lorimer
The hunted has now become the hunter. It seems that the Sluagh are not the only ones guilty of stealing life. 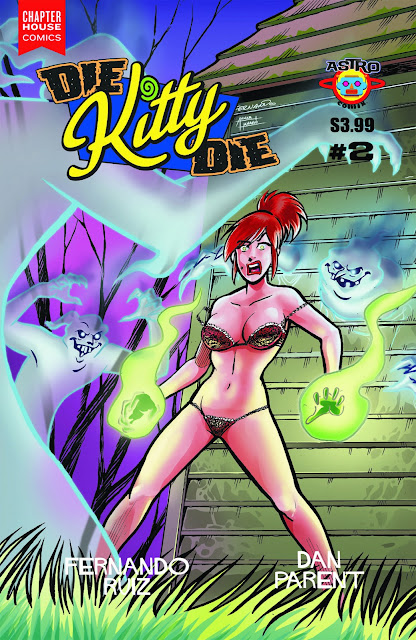 (W) Fernando Ruiz, Dan Parent (A) Dan Parent (A/CA) Fernando Ruiz
Kitty Ravencraft, a beautiful and magical young witch, is the star of her own popular comic book. When her greedy, publicity-starved publisher wants to increase interest in her comic book, he does what many comic book publishers do these days - he sets out to kill his main character, Kitty! Even worse, he decides to really spike sales by killing the real Kitty in real life! The question is, though, how do you kill a witch? 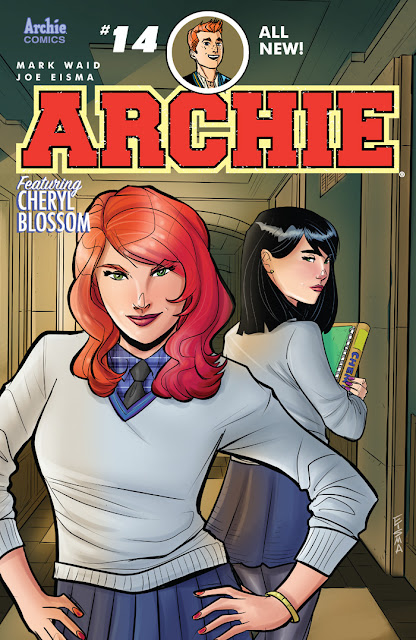 (W) Mark Waid (A/CA) Joe Eisma
Once, Veronica Lodge was the Princess of Riverdale, flowers strewn at her feet everywhere she walked. Now she's a just regular student at a private school full of Mean Girls who've made her their Betty, led by their Queen Bee, the alluring and diabolical Cheryl Blossom. 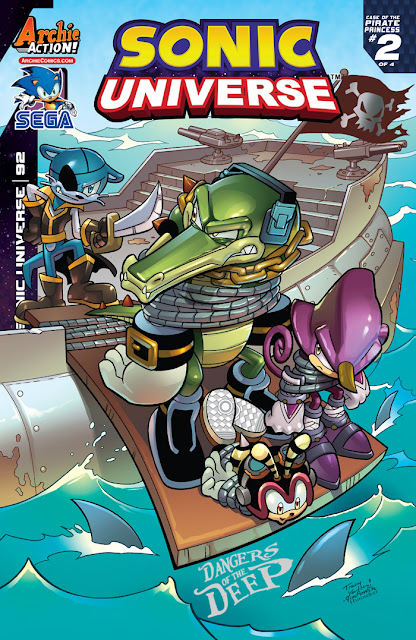 (W) Ian Flynn, Aleah Baker (A) Jim Amash, Adam Bryce Thomas (CA) Tracy Yardley
Enter the Depths of Danger in "The Case of the Pirate Princess," Part Two: The Chaotix have tracked down the princess of Meropis and the pirates that kidnapped her - but now they're prisoners as well!  And Vector's daring plan to escape... is to join them? It's mysteries and revelations galore as the Chaotix hit the high seas! Featuring cover art by Sonic comics veteran Tracy Yardley and a "Shinobi" variant by monster-talent T-Rex! 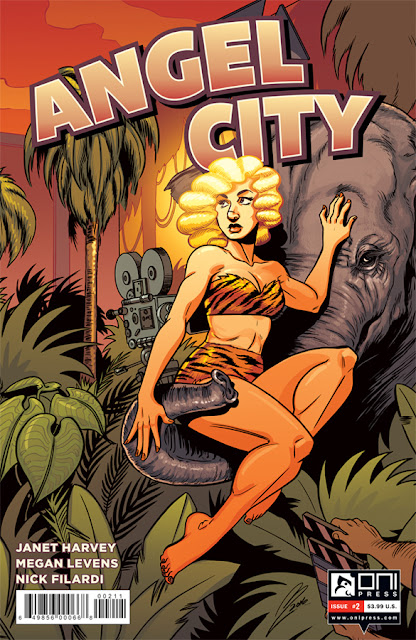 (W) Janet Harvey (A/CA) Megan Levens
Frances Faye and Dolores Dare were best friends, once upon a time; small town girls with cardboard suitcases and dreams of Hollywood stardom. But that was the past. Now, Frances has been murdered, and the crooked Los Angeles cops don't care enough to solve the crime. Dolores hunts for the murderer everywhere, from high-end studio lots to seedy gambling dens. But as she gets closer to unraveling the mystery, she also nears a betrayal that hits close to home. 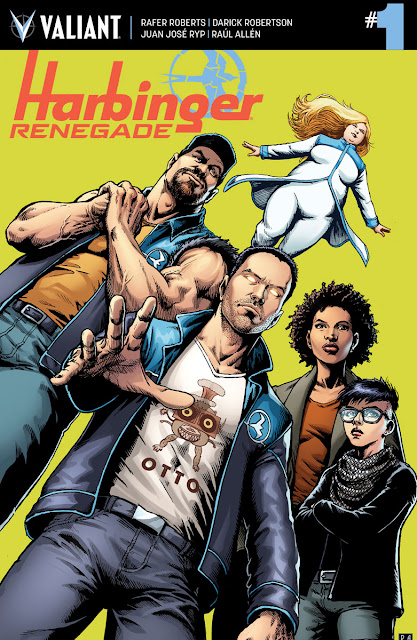 (W) Rafer Roberts (A/CA) Darick Robertson
Anyone you know could become a psionically powered "harbinger" with the potential to reshape the course of human history. Your neighbor. Your boss. Your best friend. Your kids.

Six months ago, a secret team of renegade whistleblowers leaked the existence of these extraordinarily dangerous individuals to a stunned world. Today, all across the country, crude, DIY psiot activation attempts have left hundreds brain damaged...or worse. The emergence of a new psiot in a community often leads to riots and mass violence. Gun sales are through the roof.

America is terrified of what could happen next.

With this revolutionary upheaval now in motion, Kris Hathaway, John "Torque" Torkelson, Faith "Zephyr" Herbert, and Peter Stanchek are about to discover their calling. Together, the HARBINGER RENEGADES are moving from town to town, building their ranks, and subverting authority one mind at a time...and setting out to prove once and for all that behind their power, there has always been a purpose.

This November, the most fearless superteam in comics is going underground for AN ALL-NEW ONGOING SERIES from Harvey Award nominated writer Rafer Roberts (A&A: THE ADVENTURES OF ARCHER & ARMSTRONG) and superstar artist Darick Robertson (Happy!,The Boys)! 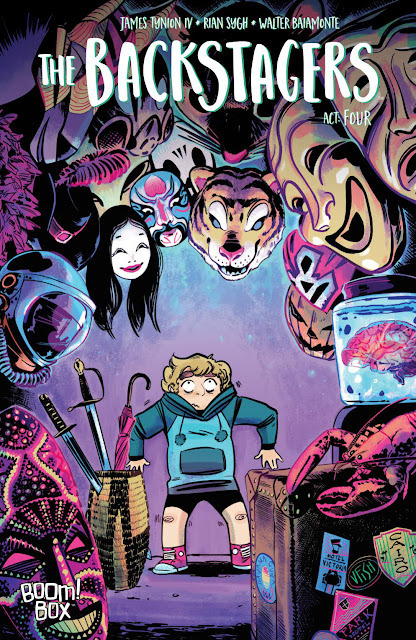 (W) James TynionIV (A) Rian Sygh (CA) Veronica Fish
It's opening night, but the Backstagers have gone so far past the barrier of no return that even the Stage Managers can't find them! 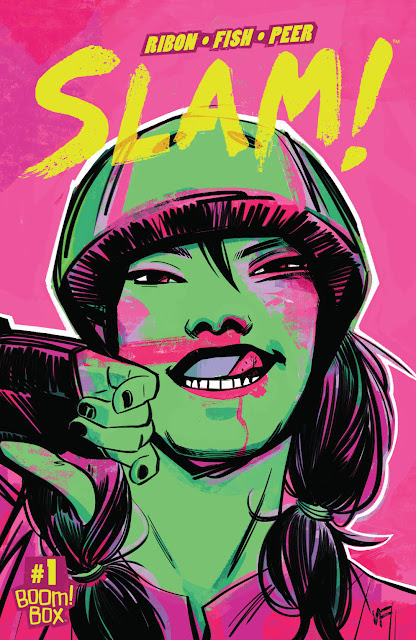 (W) Pamela Ribon (A/CA) Veronica Fish
Television Without Pity's Pamela Ribon (Rick and Morty) and artist Veronica Fish (Archie) dive into the fast-paced, hard-hitting world of roller derby!
Jennifer Chu and Maise Huff (aka Knockout and Ithinka Can on the track) have been best friends since their first day of Fresh Meat Orientation for the Eastside Roller Girls, but when they get drafted for two different teams they'll have to figure out if the bond between them is stronger than the pull of a team when a win is on the line.
You get slammed on the track and slammed in life, and in both cases you have to take your hits and get back up again! 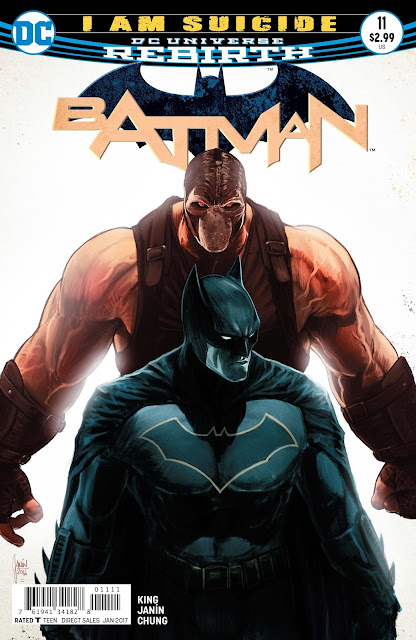 (W) Tom King (A/CA) Mikel Janin
"I am Suicide" part three! Plunging into the belly of the beast, Batman and his team of misfits infiltrate Santa Prisca. Betrayal and savagery unfold as Batman races to steal Bane's prized possession...and not everyone will make it out alive. 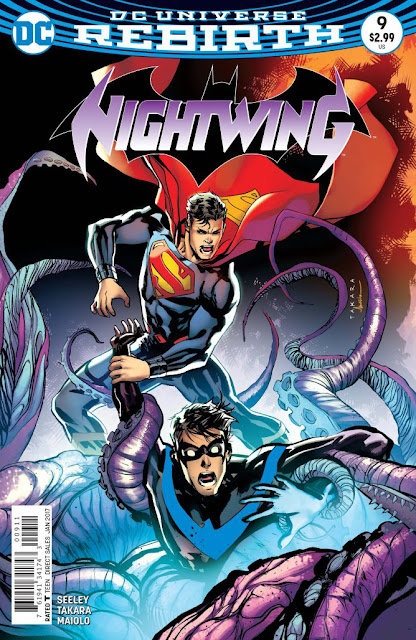 (W) Tim Seeley (A/CA) Marcio Takara
"FACING DESTINY"! In this single-issue tale, Nightwing is being attacked in his dreams by Dr. Destiny, and the only person who can help him is Superman! But following Nightwing's confrontation with Raptor and the aftermath of "Night of the Monster Men," can Nightwing trust a Superman he doesn't know - or will his lack of trust get them both killed?! 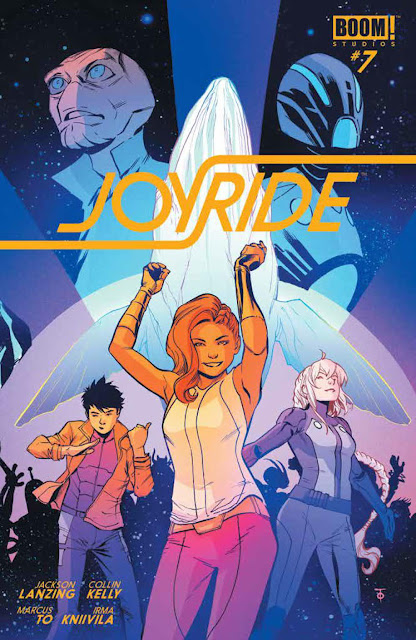 (W) Jackson Lanzing, Collin Kelly (A/CA) Marcus To
When that eighth-dimensional being Uma freed in issue #2 conquers a planet to throw a party in her honor, Uma is left with no choice but to do the one thing that goes against everything she believes in: Call the cops. 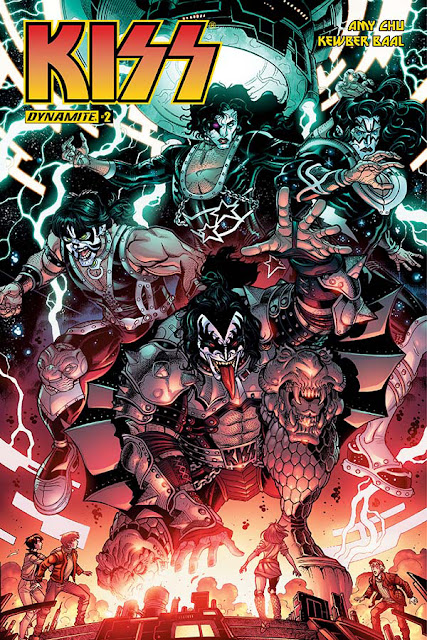 (W) Amy Chu (A) Kewber Baal (CA) Nick Bradshaw
In the underground city of Blackwell, four children of the future discover four Elders from the past. The Elders, who live on as programs in the computer MORPHEUS, reveal a history they never knew, and deliver a warning-something has gone terribly wrong with their world. And it's up to the four friends to find out what. 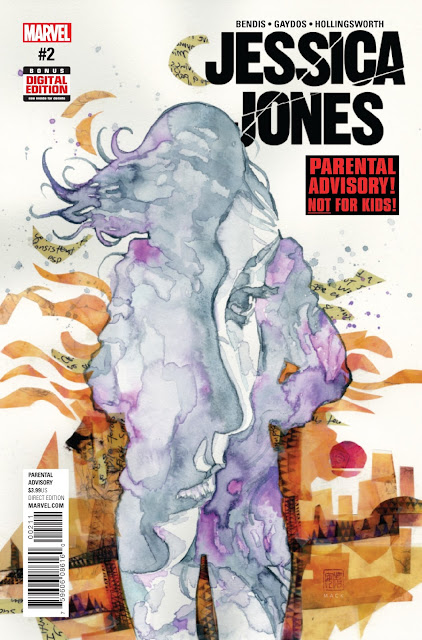 (W) Brian Michael Bendis (A) Michael Gaydos (CA) David Mack
• There are so many mysteries to discover in the Marvel Universe and Jessica's new case may be the most dangerous one.
•  No spoilers, but some of the biggest questions about the new Marvel NOW! are about to be revealed in this very comic.
Parental Advisory 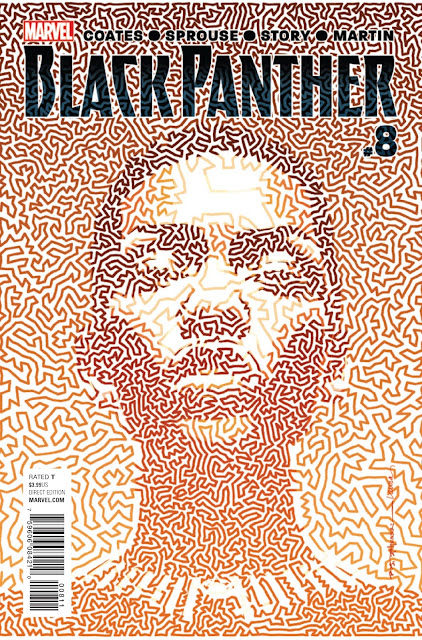 (W) Ta-Nehisi Coates (A) Chris Sprouse (CA) Brian Stelfreeze
VOYAGE INTO THE DJALIA
•  T'Challa's research and technology takes him to a place that not even THE CREW can follow: THE DJALIA, Wakanda's collective memory.
•  Just getting there was hard, but finding SHURI across their nation's past, present and future might turn out to be impossible.
•  Even so, the strain on his Soul-Stalker abilities might tear him apart before he gets very far...
Rated T 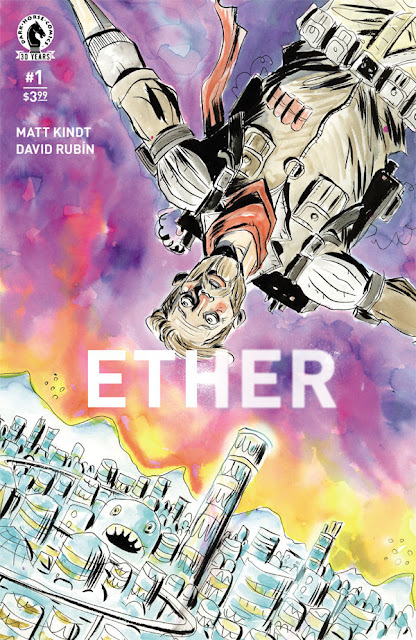 (W) Matt Kindt (A) David Rubin (CA) Jeff Lemire
A science-minded adventurer gets mixed up in the mysteries of a fantasy world in this charming new adventure from an award-winning creative team. Boone Dias is an interdimensional explorer, a scientist from Earth who has stumbled into great responsibility. He's got an explanation for everything, so of course the Ether's magical residents turn to him to solve their toughest crimes. But maybe keeping the real and the abstract separate is too big a job for just one man. 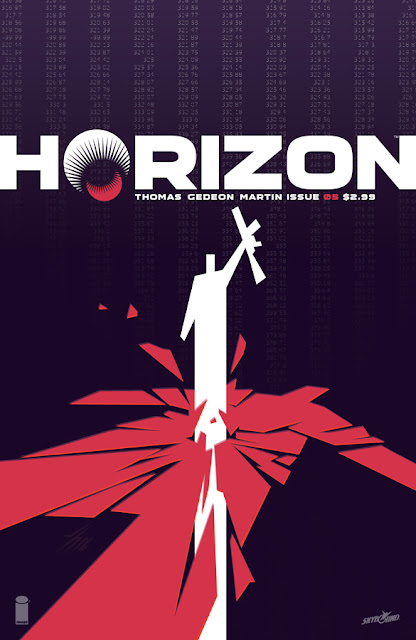 (W) Brandon Thomas (A) Juan Gedeon (CA) Jason Howard
There's an interrogation underway. The truth will be rewarded, and lies? Lies are expected. The Earth is full of liars and out of second chances. 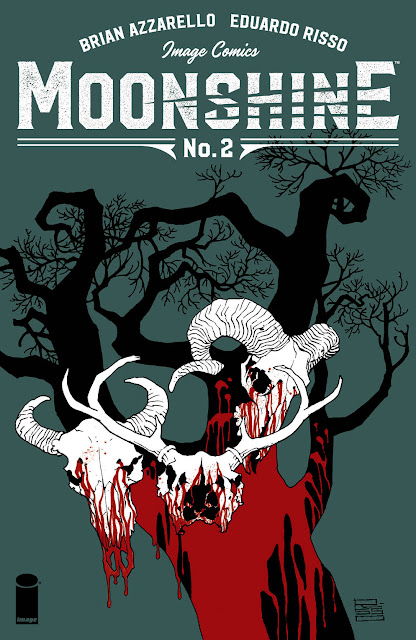 (W) Brian Azzarello (A/CA) Eduardo Risso
"MOONSHINE": Part Two-Gangster Lou Pirlo thought he was stepping up in the NYC mob when he got sent to Appalachia to broker a big moonshine deal. Instead, he stepped right in the middle of a good ol' fashioned family feud...and when one of the family might be a werewolf, things get bloody right quick. Continuing the new series from the legendary creators of 100 Bullets! 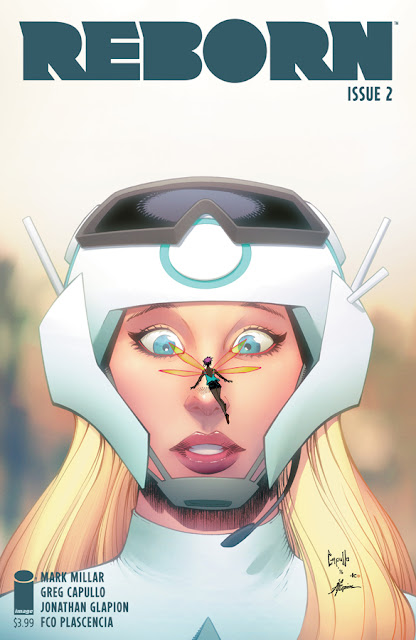 (W) Mark Millar (A/CA) Greg Capullo, Jonathan Glapion
MILLAR and CAPULLO's epic sci-fi fantasy story continues. After her death, Bonnie is reborn in Adystria and has a sword thrust into her hand. As the evils within the Dark Lands get stronger, she is Adystria's only hope: their savior.