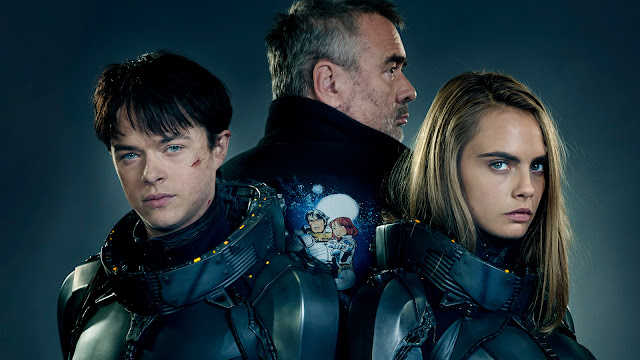 If you've seen the cult sci-fi classic 'The Fifth Element' from director Luc Besson you already know he's got a unique vision that cozies up to camp then thrills you with crazy spectacle. Now imagine what he can do with a huge budget. The answer is Valerian
and the City of a Thousand Planets and the first teaser has arrived and it doesn't disappoint.

The trailer below features the Paul McCartney-Ringo Starr-approved "Because," one of the first Beatles licensed songs released for a movie in decades, that sets the tone for the big sweeping science fiction epic. Full of dazzling effects, inventive alien designs, and plenty of exciting action, 'Valerian' has the look and feel of 'Fifth Element' amplified ten-fold.

Valerian and the City of a Thousand Planets is scheduled for release July 2017.

Valerian (Dane DeHaan) and Laureline (Cara Delevingne) are special operatives for the government of the human territories charged with maintaining order throughout the universe.

Under directive from their Commander (Clive Owen), Valerian and Laureline embark on a mission to the breathtaking intergalactic city of Alpha, an ever-expanding metropolis comprised of thousands of different species from all four corners of the universe. Alpha’s seventeen million inhabitants have converged over time- uniting their talents, technology, and resources for the betterment of all. Unfortunately, not everyone on Alpha shares in these same objectives; in fact, unseen forces are at work, placing our race in great danger.