Every New Comic Book Day brings us a new batch of incredible books. You know what to expect from the Big Two. This week is no different with the always reliable 'Batman' from DC Comics and 'Avengers' from Marvel. But this week Marvel is finally releasing the much-anticipated 'America' #1 featuring fan-favorite America Chavez. The Young Avenger helms her own title making the gay Latina a ground-breaker for the publisher. Indies are very strong this week as well. Check out the latest issues of The Dregs, Kingsway West, Faith, Giant Days, James Bond, and Jeff Lemire's new ongoing Royal City. Happy reading! 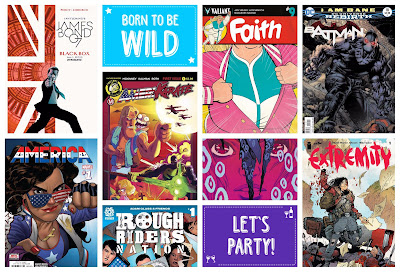 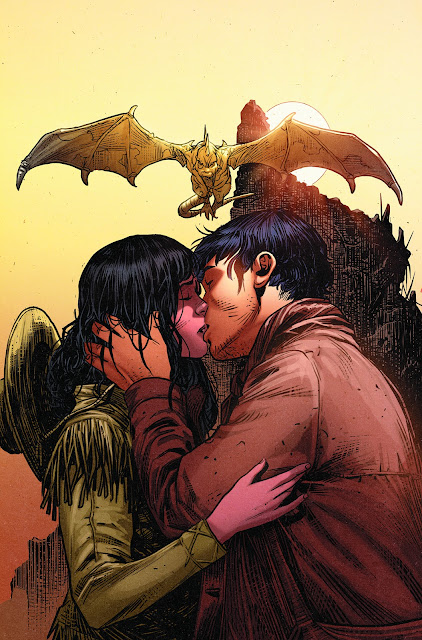 (W) Greg Pak (A/CA) Mirko Colak
In an Old West overrun with magic, the outlaw Kingsway Law, the swordswoman Ah Toy, and the winged scout Strode plunge into their final battle, defending a group of Chinese miners against the Engineer of New York. But what happens when Kingsway must choose between the community that needs him and the lost wife he so desperately wishes to find? 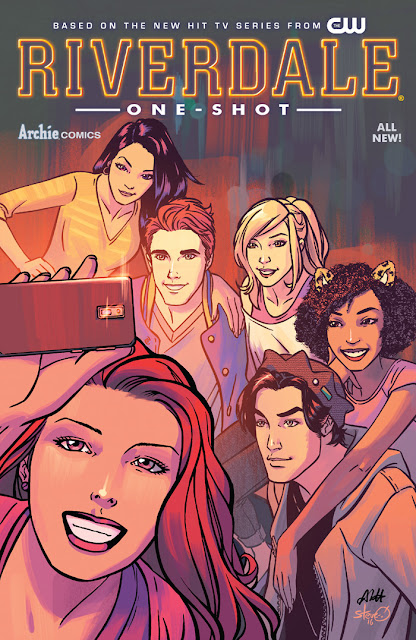 (W) Roberto Aguirre-Sacasa (A/CA) Alitha Martinez
Learn the secrets and hidden tales from the summer before the eternal love-triangle begins in this special issue, which features four short stories focusing on the major players and events in the Riverdale series. You dare not miss this special commemorative issue in advance of the upcoming ongoing Riverdale series, written by Roberto Aguirre-Sacasa (Afterlife with Archie, Chilling Adventures of Sabrina) and the writers of the CW's Riverdale series, with stunning art by Alitha Martinez (Black Panther: Worlds of Wakanda)! 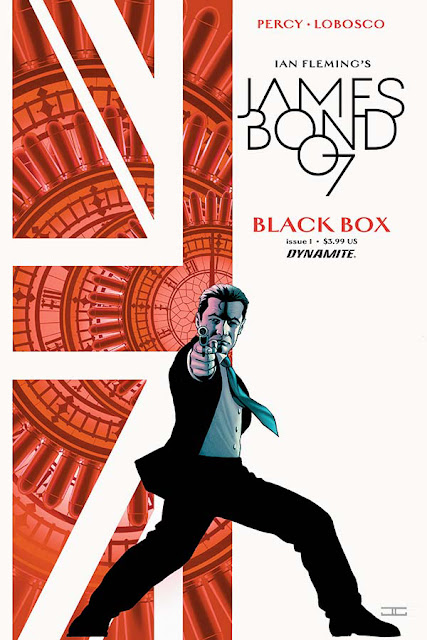 (W) Ben Percy (A) Rapha Lobosco (CA) John Cassaday
Black Box Part One - Whiteout
The next epic adventure for 007 kicks off in the snowbound French Alps, where Bond finds himself in the crosshairs of an assassin who targets other assassins. This is the first puzzle piece in a larger adrenaline-fueled mystery that will send Bond across the globe to investigate a digital breach that threatens global security. 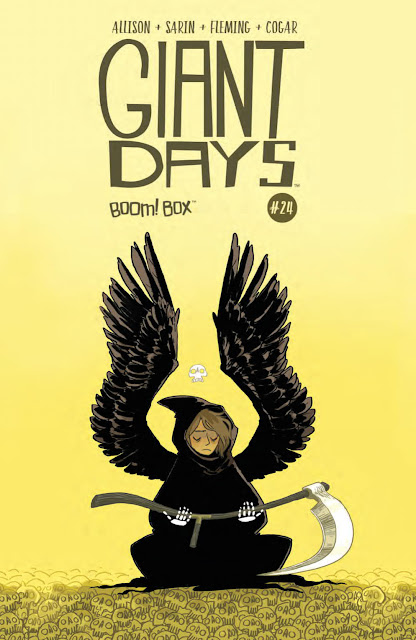 (W) John Allison (A) Max Sarin, Liz Fleming (CA) Lissa Treiman
As the Christmas break looms, Susan's endless cold refuses to go away, Daisy is in the honeymoon period of her relationship with Ingrid, and Esther is working all hours at the comic shop. 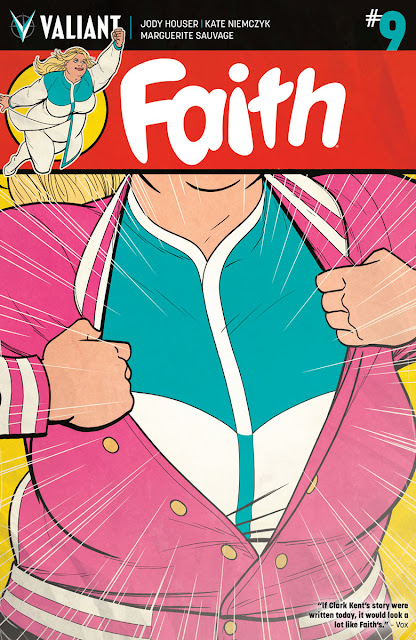 Sometimes saving the world entails a little help from your friends. When a suspicious new intern comes to Zipline, asking questions about celeb columnist Faith Herbert, it's up to her coworkers to help safeguard her secret identity as Summer Smith. Faith's greatest power has always been inspiring others - see just how much she's changed the lives of her new friends in this special one-shot story! 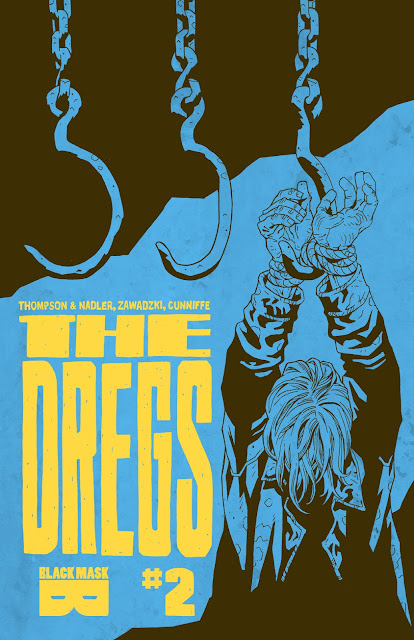 (W) Zac Thompson, Lonnie Nadler (A/CA) Eric Zawadzki
Where are the homeless people going? Is this issue any closer to a real detective story? The hidden symbols will show the way. 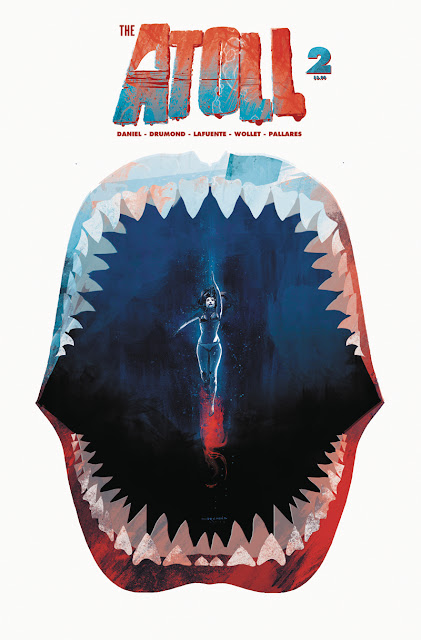 (W) Tim Daniel (CA) Joana Lafuente (A/CA) Ricardo Drumond
When the burlap sack is ripped from her head, decorated Olympic athlete Story Helms finds herself seated on a steel platform overlooking an arena somewhere far off the northwestern coast of Australia. Welcome to The Atoll, where abductees are pitted in combat against the world's deadliest apex predator, Majesty, a twenty-one foot Great White Shark. Story is next in the ring; how long will she last? 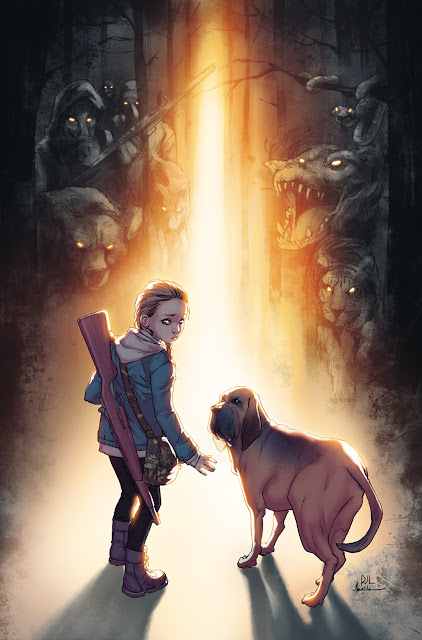 (W) Marguerite Bennett (A) Juan Doe (A/CA) Rafael de Latorre
One day, for no reason, the Animals woke up. They started thinking. They started talking. They started taking REVENGE. Collecting the first four issues of the best-selling series, plus the special one-shot issue ANIMOSITY: THE RISE. The world is plunged into chaos as the newly-intelligent Animals fight humanity, and simply fight each other, for their own life, liberty, and pursuit of happiness. In the midst of the turmoil is Jesse, an 11-year-old girl, and her dog, Sandor, who is devoted to her and her protection. One year after the incident, Jesse and Sandor begin a cross-country journey to find Jesse's half-brother, Adam, who is living in San Francisco. Don't miss out on this fantastic first collection of the series EVERYONE is talking about! 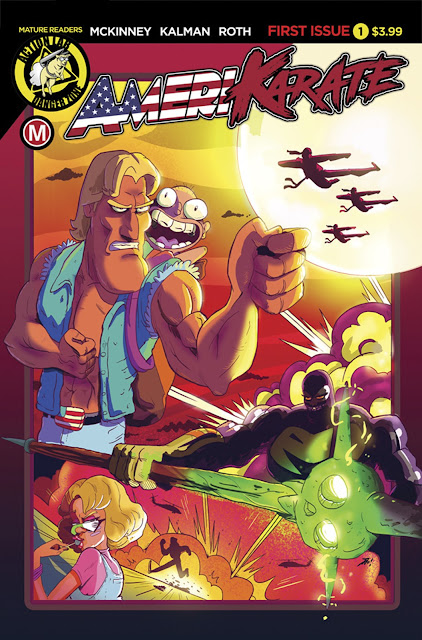 (W) Brockton McKinney, Corey Kalman (A/CA) Devin Roth
In the vein of the greatest '80s action flicks of all time - such as Bloodsport, Gymkata, Rambo, Commando, and Kickboxer - comes AMERIKARATE! The story of one American's fight to karate-fight with karate for America - and karate! 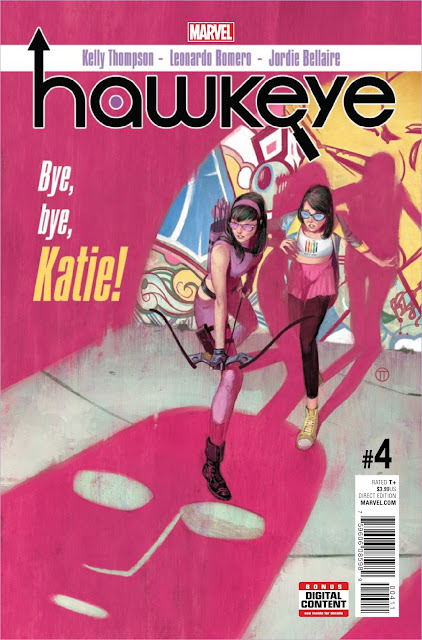 (W) Kelly Thompson (A) Leonardo Romero (CA) Julian Totino Tedesco
• Tempers have reached record highs with an unbearable hate wave spreading across L.A.
•  Hawkeye's cracked the case on who's responsible, but it's going to take more than a few arrows to get the entire city to cool down.
•  The odds maybe stacked against her, but this is where she thrives - nobody puts Katie in a corner!
Rated T+ 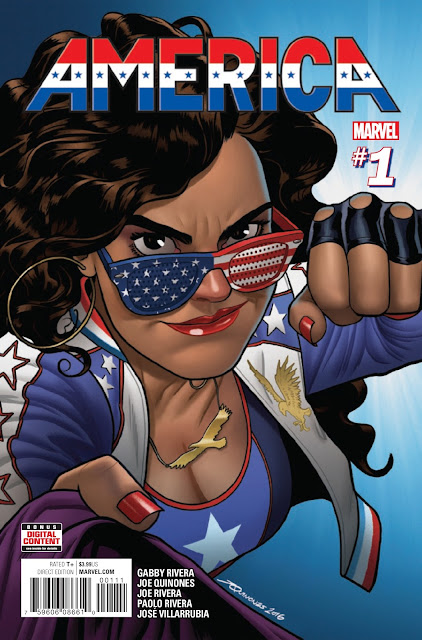 (W) Gabby Rivera (A) Joe Quinones
At last! Everyone's favorite no-nonsense powerhouse, America Chavez, gets her own series!
Written by critically-acclaimed YA novelist Gabby Rivera (Juliet Takes A Breath) and drawn by all-star artist Joe Quinones (HOWARD THE DUCK), Marvel Comics' brand new AMERICA series shines a solo spotlight on the high-octane and hard-hitting adventures of the one and only America Chavez!
America has always been uncontestably awesome, and as the newly appointed leader of the Ultimates, she's now officially claimed her place as the preeminent butt-kicker of the Marvel Universe! But while leading a team of heroes and punching out big bads is great and all, it doesn't really leave much time for self-discovery... So what's a super-powered teenager do when she's looking for a little fulfillment? She goes to college!
She just has to stop an interdimensional monster or two first, plus shut down a pesky alien cult that's begun worshipping her exploits!
Rated T+ 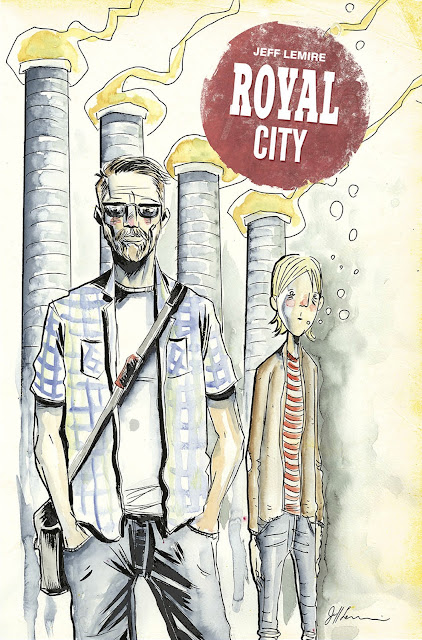 (W) Jeff Lemire (A/CA) Jeff Lemire
DOUBLE-SIZED DEBUT ISSUE! NEW ONGOING SERIES written and illustrated by JEFF LEMIRE (DESCENDER, A.D., Sweet Tooth). ROYAL CITY charts the lives, loves, and losses of a troubled family and a vanishing town across three decades. Patrick Pike, a fading literary star who reluctantly returns to the once-thriving factory town where he grew up, is quickly drawn back into the dramas of his two adult siblings, his overbearing mother, and his brow-beaten father, all of whom are still haunted by different versions of his youngest brother, Tommy, who drowned decades ago. ROYAL CITY is a return to the literary and thematic territory of LEMIRE's breakthrough graphic novel Essex County and is his most ambitious, and most personal, project to date. 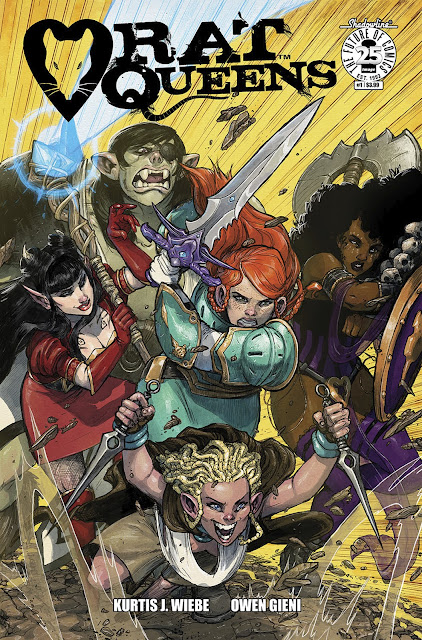 (W) Kurtis J. Wiebe (A/CA) Owen Gieni
"CAT KINGS AND OTHER GARYS," Part One-NEW STORY ARC! The Rat Queens are back! Betty, Violet, Dee, Braga, and Hannah return! Palisade is still a rat-infested troll's ass, and everyone still hates Gary. It's been a while since the Queens have done a good slaughter, so join them as they get back to the basics of killing monsters and drinking away the profits! A fresh, soft reboot to the head for the Rat Queens with artist OWEN GIENI! 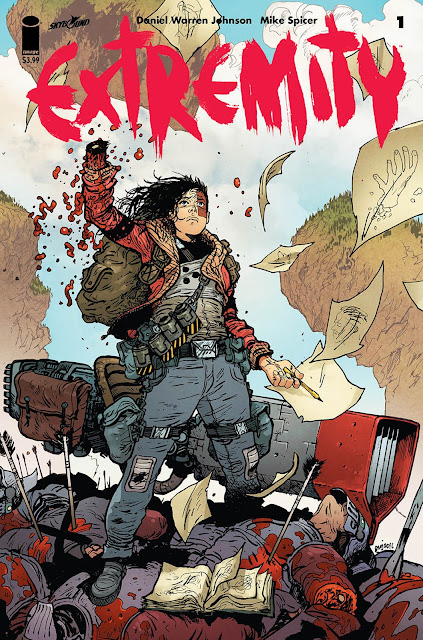 (W) Daniel Warren Johnson (A/CA) Daniel Warren Johnson
SERIES PREMIERE! Thea dreams. Not of a better life, but of revenge on the clan that ruined her family. With ferocious battles between man, machines, and monsters ahead...who knows where her quest for vengeance will take her? Creator DANIEL WARREN JOHNSON (Space Mullet) and colorist MIKE SPICER present a bold new vision, where the beauty and imagination of Studio Ghibli meet the intensity of Mad Max, in this all-new Skybound Original. 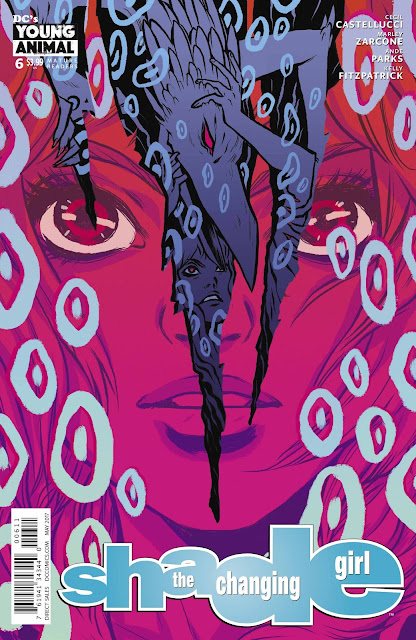 (W) Cecil Castellucci (A) Marley Zarcone (CA) Becky Cloonan
When Shade took over Megan's body, Megan had to go somewhere - and that she did. The displaced Earthling flew across the galaxy and back, and now that she's home, Megan is pissed! It's alien invader versus teenage bully in the climactic conclusion of our first arc! 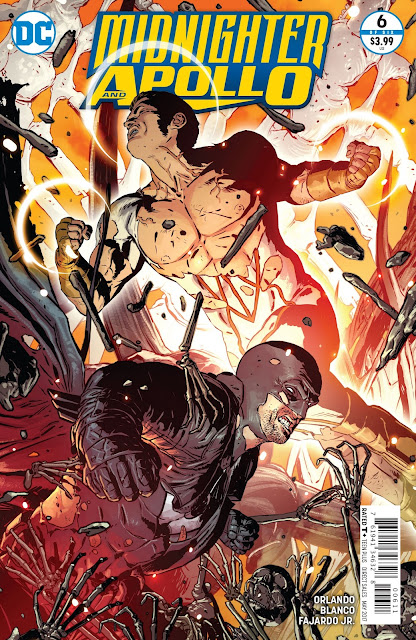 (W) Steve Orlando (A) Fernando Blanco (CA) Aco
Midnighter always knew it wouldn't be easy to fight his way out of Hell... but did he ever consider that it might be impossible? Even with Apollo's strength by his side, some wars just can't be won... is this never-ending battle finally over? 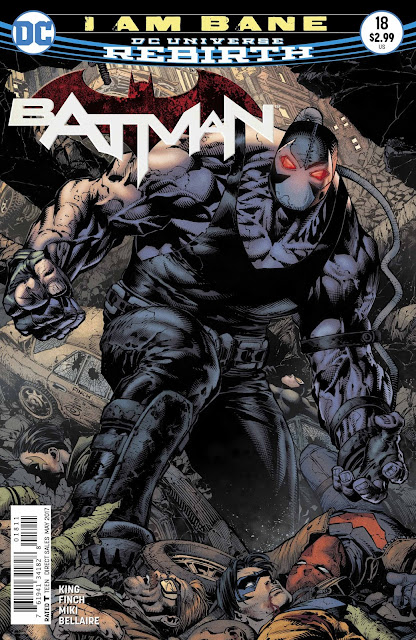