This week is loaded with so much comic book goodness we had to cut off the recommendations at 23. Let's start with the #1s. Vault Comics has come out strong with titles like Heathen and Fissure. Karma Police #1 by Chris Lewis and Jasen Smith is the fledgling publisher's latest gem. Dynamite has Doc Savage: Ring of Fire #1, Marvel debuts X-Men Prime #1 and Inhumans Prime #1, and DC Comics has some crazy crossovers with Hanna Barbara icons like Green Lantern & Space Ghost #1.

Check out this week's trade paperbacks like Henchgirl, The Hillbilly, Black Hammer, and more. Happy Reading! 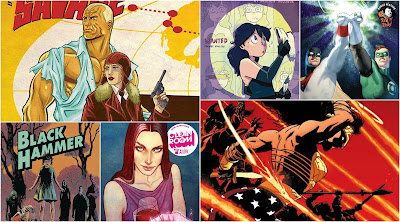 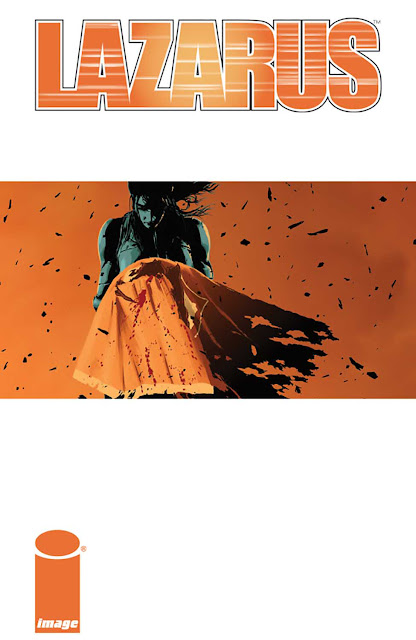 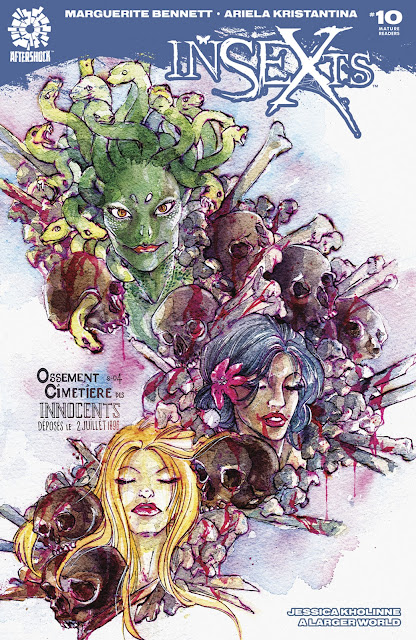 (W) Marguerite Bennett (A/CA) Ariela Kristantina
As the mystery of the Parisian Monstress lures Lady and Mariah deep into the catacombs beneath the city, our heroes discover that the Medusa is not the only evil that seeks them...  From the writer of the break-out hit Animosity, DC Comics' Bombshells, and Marvel's A-Force. 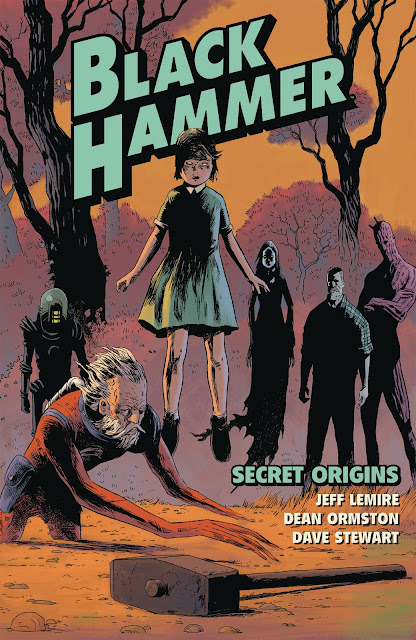 (W) Jeff Lemire (A/CA) Dean Ormston
Once they were heroes. Now, banished from existence by a multiversal crisis, the old champions of Spiral City lead simple lives in a timeless farming town. But as they attempt to free themselves from this strange purgatory, a mysterious stranger works to bring them back into action for one last adventure! Collects issues #1-6 of the series. 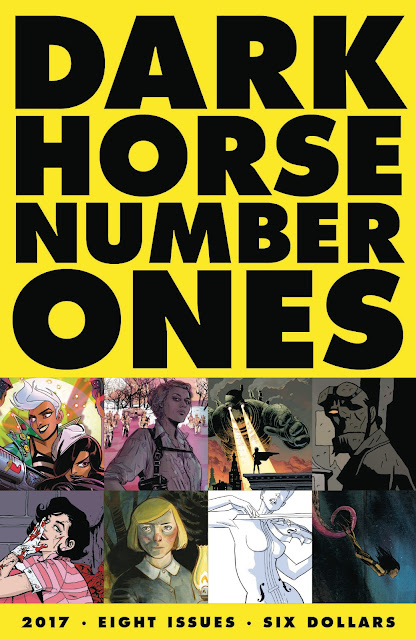 A deeply discounted collection of first issues for new or curious readers. 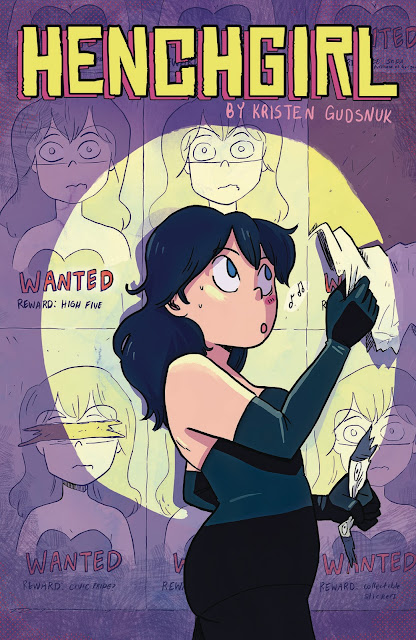 (W) Kristen Gudsnuk (A/CA) Kristen Gudsnuk
Mary Posa hates her job. She works long hours for little pay, no insurance, and worst of all, no respect. Her coworkers are jerks, and her boss doesn't appreciate her. He's also a supervillain. Cursed with a conscience, Mary would give anything to be something other than a henchgirl.

From the illustrator of Little, Brown Books' VIP: I'm With the Band. Collects issues #1-11 from Scout Comics. 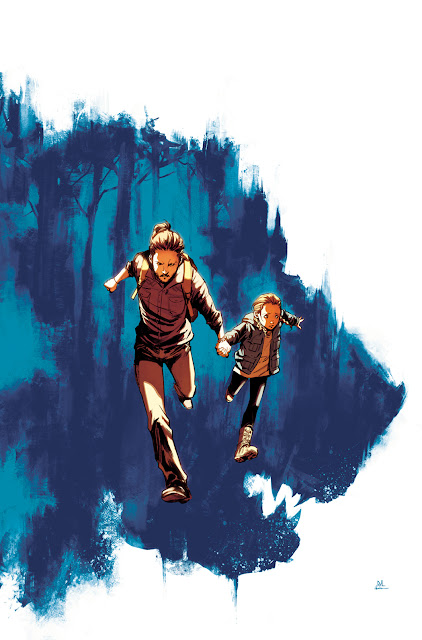 ANIMOSITY #6
DEC161181
(W) Marguerite Bennett (A/CA) Rafael de Latorre
When Jesse is abducted by humans, Sandor, her faithful and protective Bloodhound, will cut a swath of blood and bone through everything that stands in his path to find and rescue his beloved friend

From the writer of INSEXTS, BOMBSHELLS, and A-FORCE and artist of SUPERZERO. 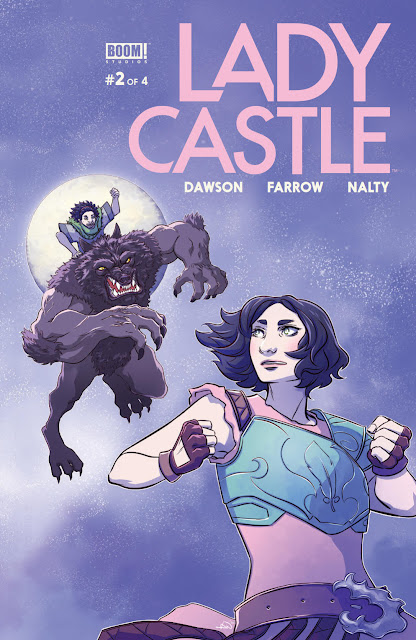 (W) Delilah Dawson (A) Becca Farrow (CA) Ashley A. Woods
The women of Ladycastle finally feel like they're ready to fight, just as the next wave of the curse hits and werewolves descend upon the castle for a howling good time! 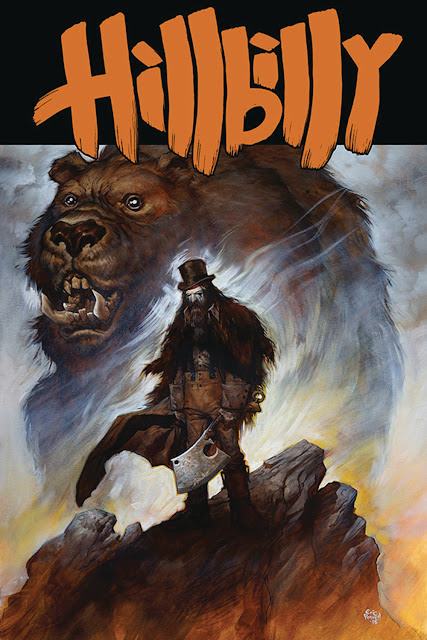 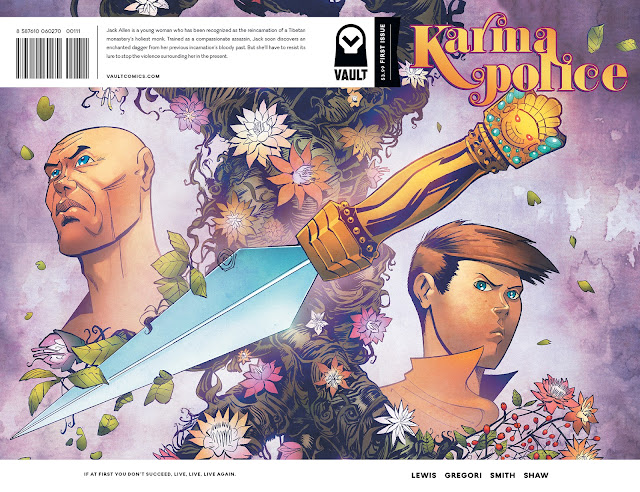 (W) Chris Lewis (A) Jasen Smith (CA) Mike Spicer (A/CA) Tony Gregori
Jack Allen is a young woman who has been recognized as the reincarnation of a Tibetan monastery's holiest monk. Trained as a compassionate assassin, Jack soon discovers an enchanted dagger from her previous incarnation's bloody past. But she'll have to resist its lure to stop the violence surrounding her in the present. 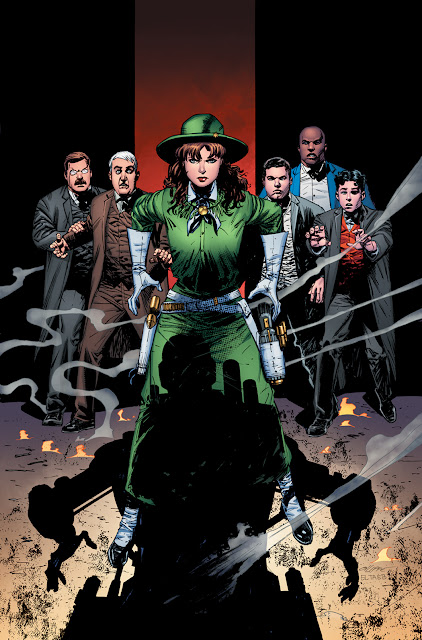 (W) Adam Glass (A) Pat Oliffe (CA) Pat Olliffe
Madman Leon Czolgosz has just shot President McKinley at the 1901 World's Fair. As the nation looks to Vice President Theodore Roosevelt for guidance, he calls upon his fellow ROUGH RIDERS to help him investigate the assassination attempt. As they dig deeper they unearth a WORLDWIDE CONSPIRACY that not only threatens the fabric of our society, but also pits the Rough Riders against some of history's most famous characters. Join this secret adventure of the greatest band of heroes that the world never knew. Welcome to ROUGH RIDERS BOOK II. 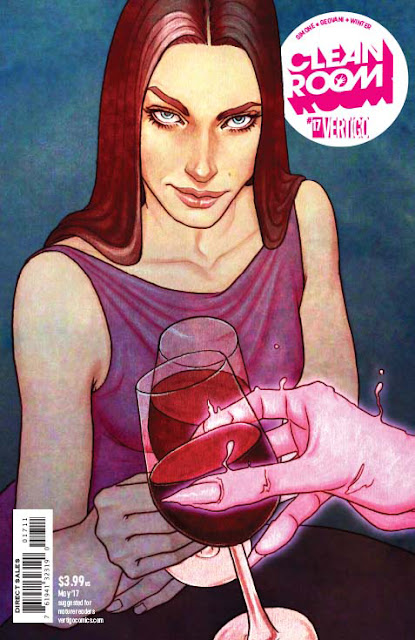 (W) Gail Simone (A) Walter Geovani (CA) Jenny Frison
The barrier between the known world and what lurks beneath crumbles as the Entities' true malevolence is unleashed on the world, and the moment Astrid Mueller has been preparing for comes with a wave of fire from above.  The death that reaches for you may be coming from the mirror! 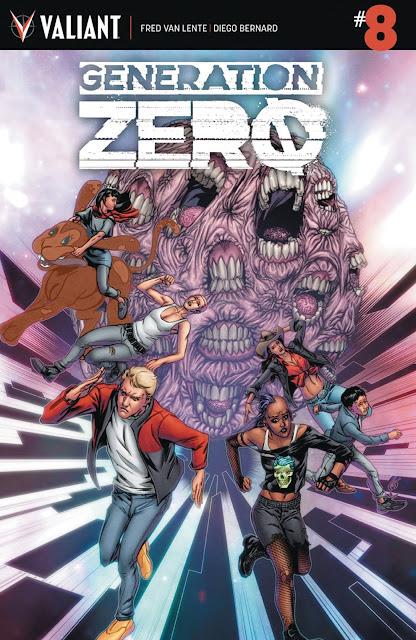 Generation Zero are trapped inside the Heroscape - a twisted, extra-dimensional realm where they can explore the world as it looks through someone else's eyes... And, unfortunately, it seems that most of their friends and neighbors have some pretty messed up stuff going on up there! They led insurgencies and counter-strikes, but can anything in this team's precision military training prepare them for the darkness that lurks at the heart of Rook's collective unconscious? 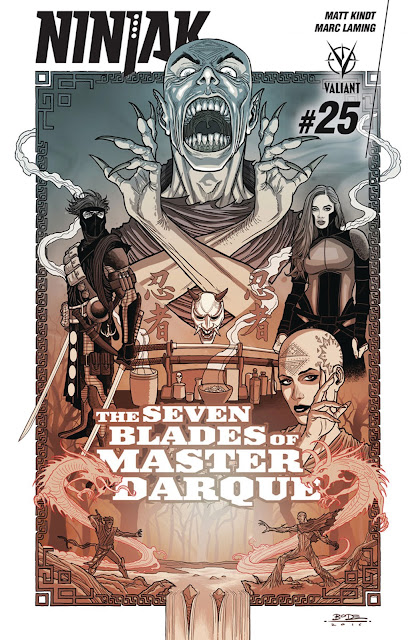 Once sworn enemies, Ninjak and the Shadow Seven have forged an uneasy alliance to accomplish their singular goal: kill Master Darque! But why can't Colin King shake the feeling that he's leading a suicide mission, or that his mysterious benefactor, Sandria Darque, isn't giving him the whole story? Ninjak's about to confront a terrifying truth...and the answers just might destroy him! 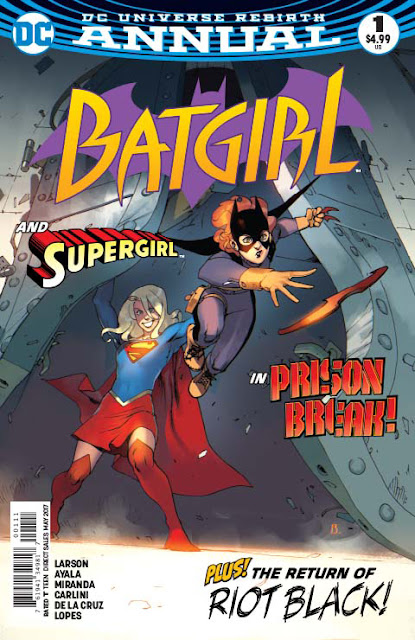 (W) Hope Larson (A) Inaki Miranda (CA) Bengal
Batgirl and Supergirl must team up to break into Arkham Asylum! In this all-new Rebirth annual Batgirl must seek Supergirl's help to solve a mystery that leads them to the heart of the most insane insane asylum there is! But what they discover - and who they discover - in Arkham will lead to a much, much bigger story! 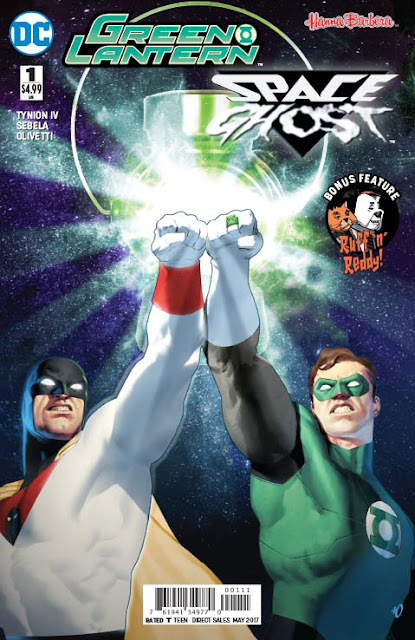 (W) James TynionIV, Christopher Sebela, Howard Chaykin (A) Howard Chaykin (A/CA) Ariel Olivetti
Trapped in a strange rift in time, Green Lantern and Space Ghost are forced to battle a variety of foes - and each other! And even if they manage to survive, they will be thrown into a world with no concept of interstellar travel - or even what an alien is! Stripped of their weapons by a xenophobic culture, the duo will have to battle to regain them - but what happens when Space Ghost dons the Emerald Ring and Hal Jordan put on the Power Bands? And in the backup feature, Ruff and Reddy were once the toast of nightclubs, variety shows, late night chat fests and Broadway. Learn how they became the comedic duo of yesterday... before they hit rock-bottom today! 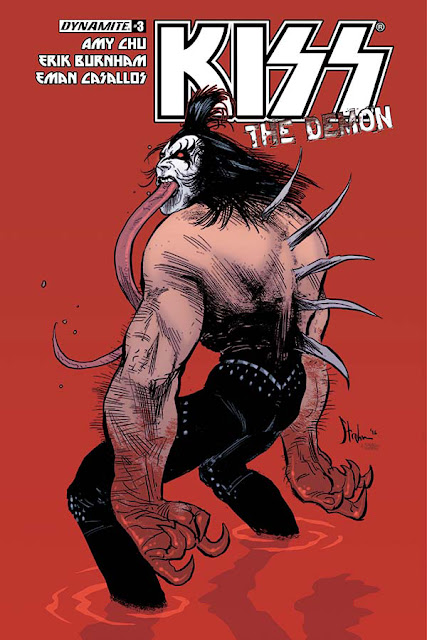 (W) Amy Chu, Erik Burnham (A) Eman Casallos (CA) Kyle Strahm
Sam Blackwell has grand visions for his company and his hometown. Already the city and the company look nothing like what his grandfather founded. Sam is a hero. But as he expands his empire, Kimi and Milo discover some unsettling secrets about Sam's master plan, and fear for the worst. 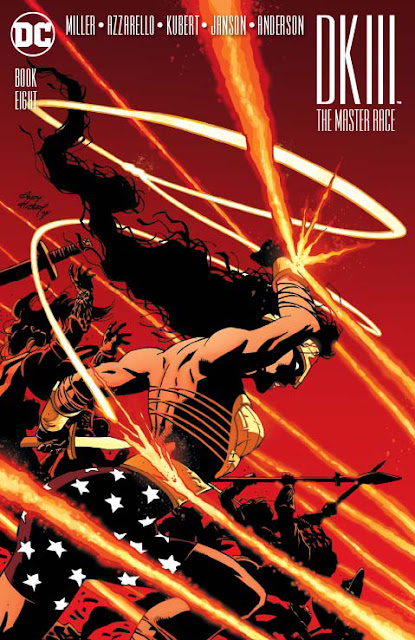 (W) Frank Miller, Brian Azzarello (A) Klaus Janson, Frank Miller (A/CA) Andy Kubert
Baal's Kryptonian army has invaded Themyscira. Wonder Woman and the Amazons will show them why that was a deadly mistake. 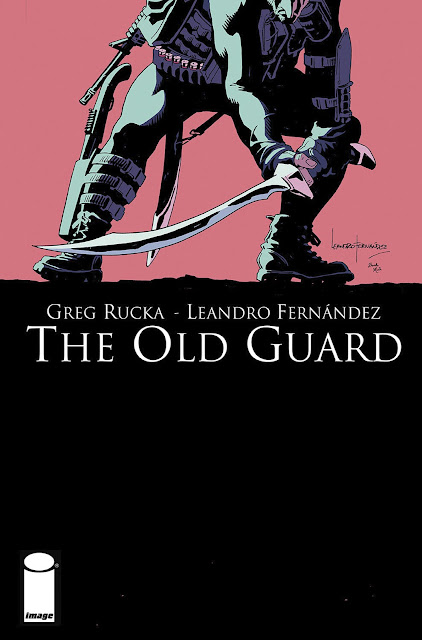 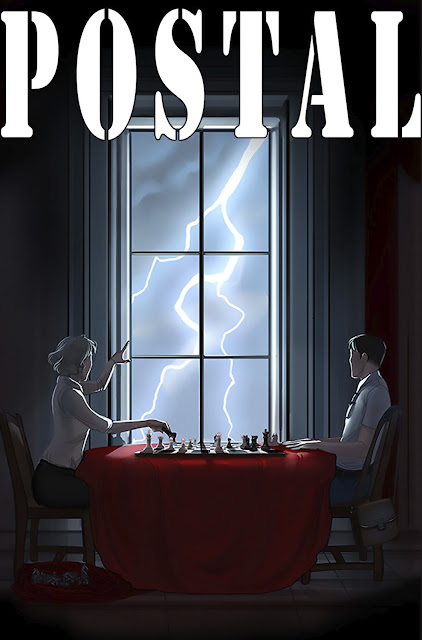 (W) Bryan Hill (A) Isaac Goodhart (CA) Linda Sejic
To stop an internal uprising, Mark joins forces with Molly, the most dangerous person in Eden. His mother is brutal. His father is insane. Tested by power, Mark will learn his own nature and what he truly wants for Eden, Wyoming. 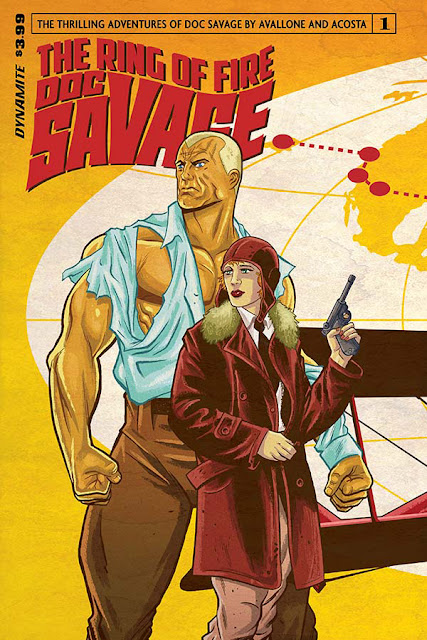 (W) David Avallone (A) Dave Acosta (CA) Brent Schoonover
1938: Amelia Earhart is missing, volcanoes are going off under US Navy bases, Silver Death's Heads are trying to kill Doc Savage, and FDR is quite concerned about all of this. Return to the 1930s for a thrilling four-issue miniseries reuniting the Twilight Zone: The Shadow creative team of writer David Avallone and artist Dave Acosta! 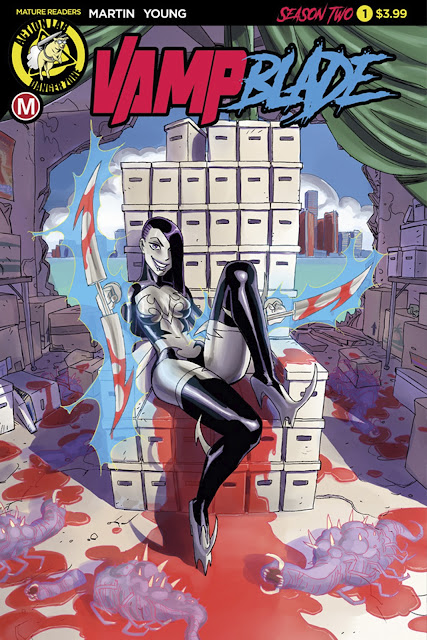 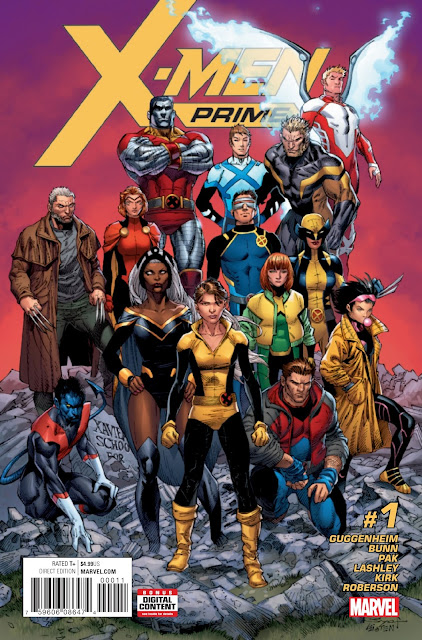 (W) Marc Guggenheim (A) Ken Lashley, Leonard Kirk, Ibraim Roberson (CA) Ardian Syaf
RESURRXION BEGINS HERE!
In the wake of their war with the Inhumans, the X-MEN are at a crossroads. Where do they go from here? Luckily, one beloved X-Men has the answer to that question: Xavier's dream comes full circle as KITTY PRYDE returns to the X-Men, ready to lead them in their mission to protect a world that hates and fears them. The next chapter of the X-Men's saga starts here!
Rated T+ 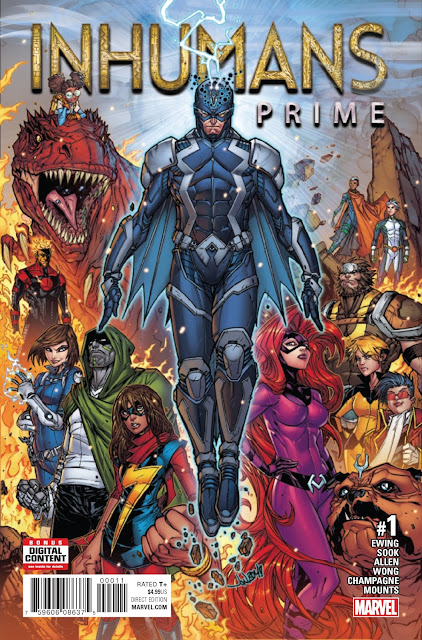 (W) Al Ewing (A) Ryan Sook (CA) Jonboy Meyers
RESURRXION BEGINS HERE!
In the wake of the awesome events of IVX - what will become of the Inhumans? In this oversized special issue - the trial of Maximus! The coming of Marvel Boy! And what is the dark secret of Black Bolt? A special bridging issue between the past of the Inhumans and their future - on Earth and in the stars!
Rated T+