It's another glorious week of comics and there's no shortage of great titles. How can you beat BITCH PLANET? How about a BATMAN/THE SHADOW collaboration from Scott Snyder, Steve Orlando, and Riley Rossmo? Perhaps you want a blockbuster cinematic experience then check out X-O MANOWAR. Love 'Aliens'? Grab the first issue of ALIENS: DEAD ORBIT. Want some high adventure? Buy DOC SAVAGE: RING OF FIRE, THE OLD GUARD, BRITANNIA, LADY CASTLE, KARMA POLICE, and MAGDALENA. Whatever you're in the mood for get it today! Happy reading! 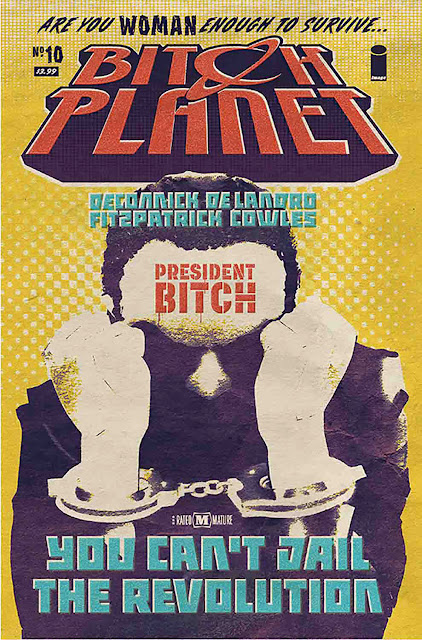 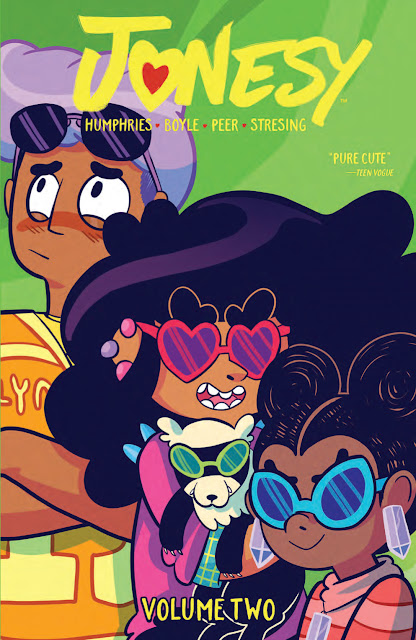 (W) Sam Humphries (A) Caitlin Rose Boyle (CA) Lissa Treiman
She doesn't sling arrows, only attitude!  The adventures of Jonesy, the teenage cupid with a penchant for plaid, continue here. Stuff still rules, high school still sucks, and getting anyone to fall in love with her is still impossible! Collects issue #5-8. 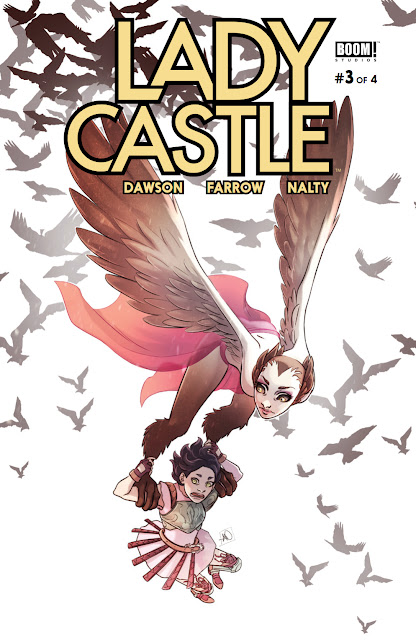 (W) Delilah Dawson (A) Becca Farrow (CA) Ashley A. Woods
The next wave of the curse descends upon Ladycastle: harpies! 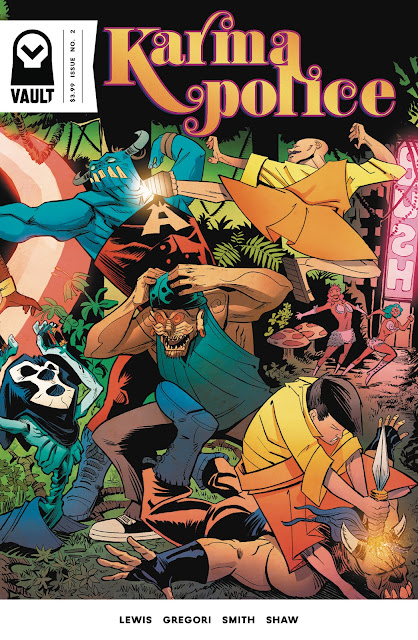 (W) Chris Lewis (A) Jasen Smith (CA) Mike Spicer (A/CA) Tony Gregori
The reincarnation of a revered monk, Jack was trained to seek out suffering spirits, and gently remove them from existence. She travels with her master to Portland, Oregon to destroy an evil spirit lurking in a strip club. Instead she discovers an enchanted dagger from her prior incarnation's bloody past, and finds herself pursued by his vicious murderers. 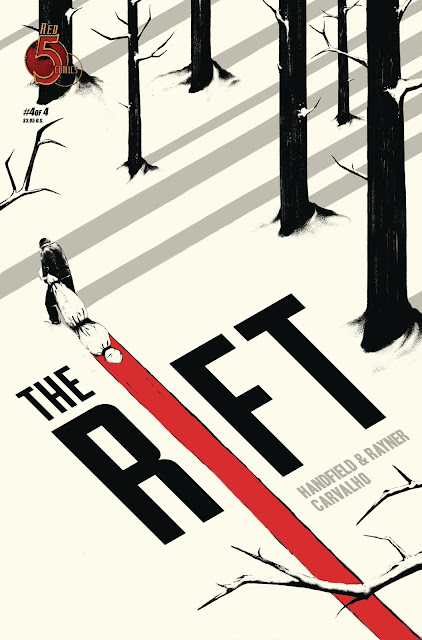 (W) Richard Rayner, Don Handfield (A/CA) Leno Carvalho
Mary Ann, Elijah, and Cole flee the wreckage of San Francisco and head for rural Washington to find Cole's son but the group is pulled back into the web of Section 47 when a Rift opens nearby, sending an unassuming algebra teacher from the 1980s into the present. When Mary Ann learns that the teacher came through while searching for his own missing daughter, she and Cole set out to investigate the connection between the missing girls, the notorious Black River serial killer, and the spiritual nature of these Rifts in time. 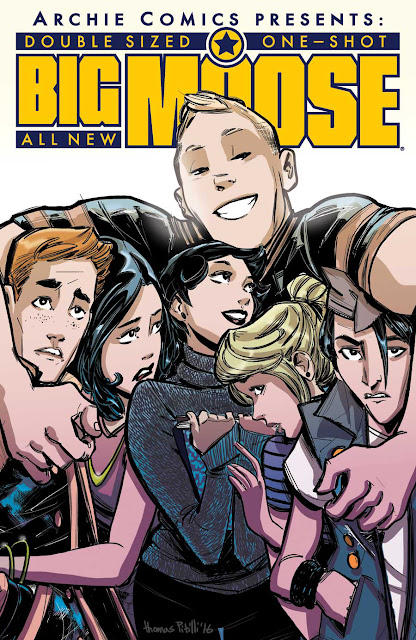 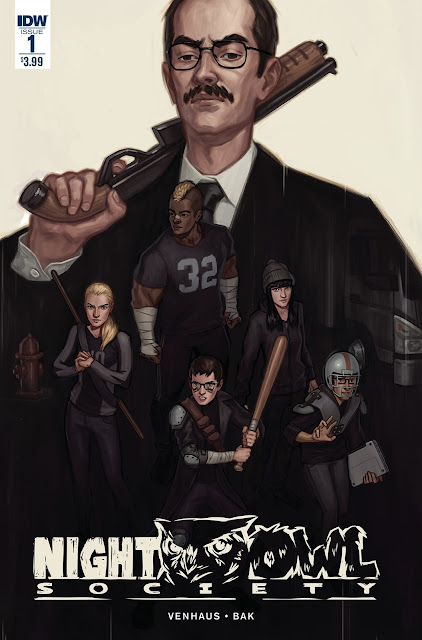 (W) Bak Venhaus (A/CA) Pius Bak
When David's only friend at school is killed by the local mob boss, David and his misfit friends take matters into their own hands by sneaking out at night to fight crime and take down the mob without getting killed . . . or grounded. 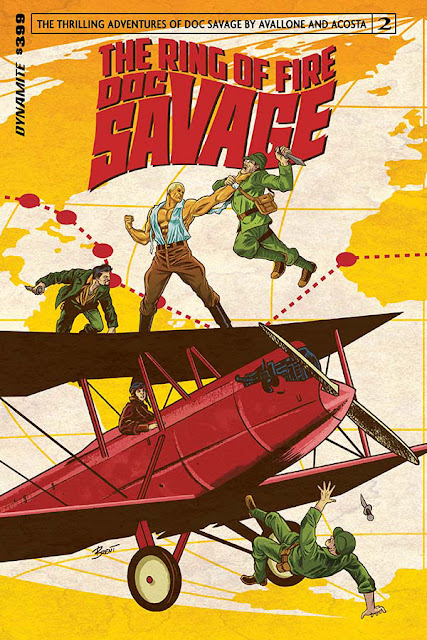 (W) David Avallone (A) Dave Acosta (CA) Brent Schoonover
What if volcanoes were weapons of war? What if Amelia Earhart was alive, but captive? Where is Pat Savage off to? Hey, what's that submarine doing there? Doc Savage has questions. David Avallone and Dave Acosta provide the answers. Planes, submarines, battle cruisers, mad scientists, madcap heiresses and the Man of Bronze collide in the Pacific, in the thrilling second chapter of DOC SAVAGE: RING OF FIRE. 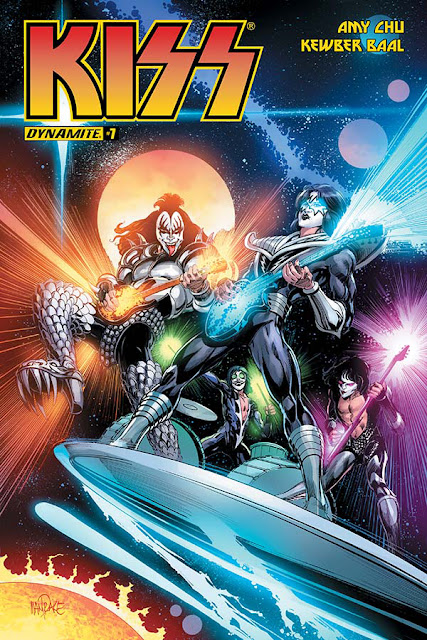 (W) Amy Chu (A) Kewber Baal (CA) Tom Mandrake
The residents of Blackwell face the music as they navigate a new and uncertain world. With the Elders no longer in power, a new generation takes charge. But they quickly discover that the universe is a big place as they attempt to find their way back to Earth. 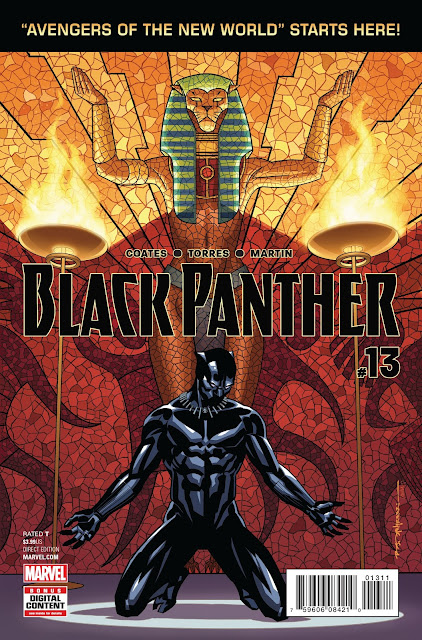 (W) Ta-Nehisi Coates (A) Wilfredo Torres (CA) Brian Stelfreeze
"AVENGERS OF THE NEW WORLD" STARTS HERE!
•  Eons ago, before Black Panthers, before Wakanda, before time itself...there were only the ORISHAS: Asali. Ogutemeli. Bast. The pantheon of gods and goddesses from which the world as we know it was manifested. But now, when Wakanda burns, they are silent. When she was flooded, they were silent. While her people war amongst themselves, ever silent they remain. Where have all the Wakanda gods gone? T'Challa means to find out...
•  New York Times Best-Selling author TA-NEHISI COATES (Between the World and Me) is joined by rising superstar artist WILFREDO TORRES (Moon Knight) for the kickoff of the next epic season of BLACK PANTHER!
Rated T 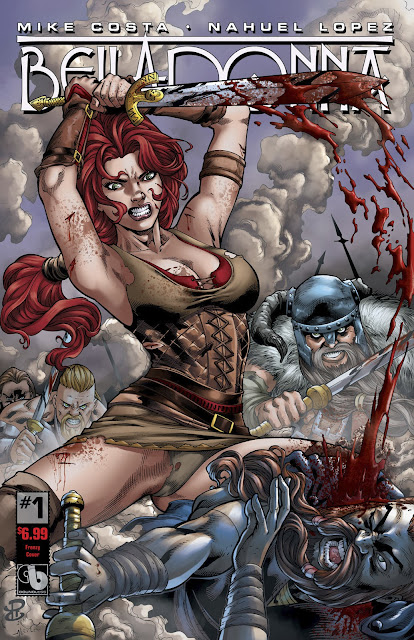 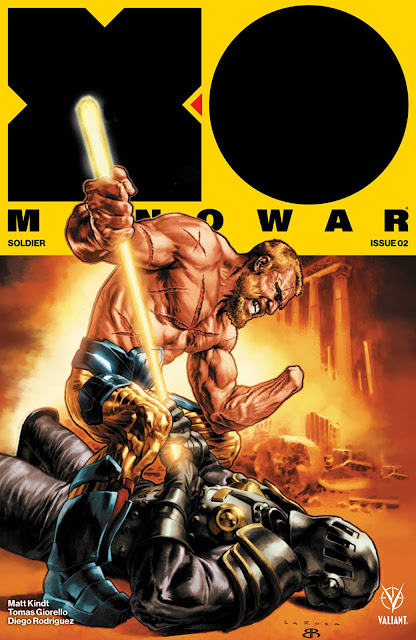 (W) Matt Kindt (A) Tomas Giorello (CA) Lewis LaRosa
They asked for war. He'll give them death.
Deep within the far reaches of space, the dogs of war have found Aric of Dacia. Conscripted into an alien army and forced into combat, Aric must enter an alien battlefield unlike any he's faced before. His only hope for survival is also the source of his greatest rage - the living suit of armor known as X-O Manowar.
Can Aric still embrace the violence within? Get ready, because the most brutal fight in X-O Manowar's life is about to begin! 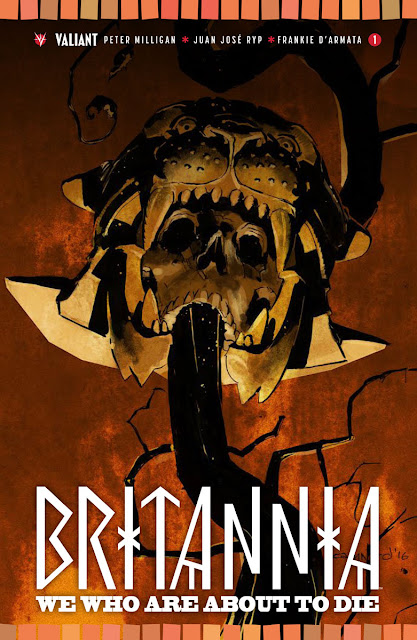 (W) Peter Milligan (A) Juan Jose Ryp (CA) Cary Nord
Valiant's critically acclaimed, 10-time sold-out magnum opus returns with a brand-new journey into myth and mystery, from comics master Peter Milligan and incendiary artist Juan José Ryp!
Fifty thousand Romans stand on their feet, watching from the rafters of the coliseum with captured breath as Achillia, a Gladiator unlike any that Rome has seen before, faces incredible odds - one
lone warrior against five of Rome's greatest. Such is the tradition, when a female gladiator enters the fray. When the carnage is complete, the coliseum roars its approval as Achillia stands victorious. Now only one match away from winning her freedom, she has begun to gain renown. The women of Rome, suppressed by their husbands and fathers, have noticed. The men of Rome, husbands and fathers to a growing horde of women entertaining ideas of independence, have noticed as well.

On the other side of Rome, a strange mystery swirls through the Palatine Hill. In the dead of night, down winding alleys, Rome's elite swear that they see visions of a blood-soaked Apollo walking the city...visions that are driving them mad. Even more are becoming sick with weird fever god-dreams. Panic ensues in the city. The Chief Vestal, Rubria, is arrested by Emperor Nero and threatened with crucifixion unless the deadly curse that's fallen on Rome is lifted. She asks Antonius Axia, hero of Britannia and Rome's only detective, for help. She offers only one clue...the gladiator Achillia 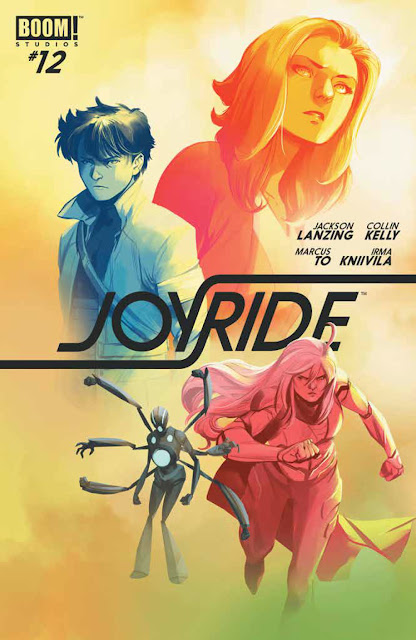 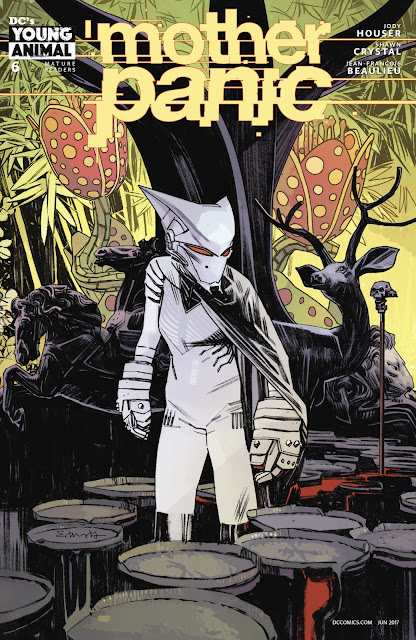 (W) Jody Houser (A) Shawn Crystal (CA) Tommy Lee Edwards
As Mother Panic's scope of revenge narrows, her partnership with the unhinged Pretty falls apart. Unable to bear the end to their collaboration Pretty turns on Mother Panic. After all, if she's not with him...
MATURE READERS (W) Greg Rucka (A/CA) Liam Sharp
"The Truth" part four! As the reality of Themyscira is revealed, Wonder Woman is forced to make a decision: defy the will of the gods or betray her Amazon sisters to Godwatch!
RATED T 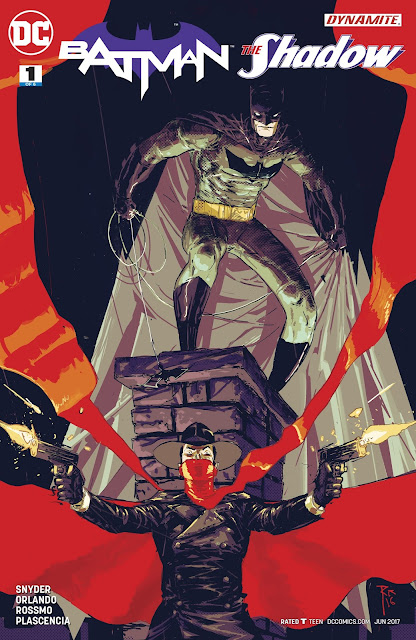 (W) Scott Snyder, Steve Orlando (A/CA) Riley Rossmo
Two of history's greatest vigilantes are reunited at last! Murder has come to Gotham City, and Lamont Cranston appears to be the culprit...but he's been dead for over fifty years! Batman will go to the ends of the Earth to unravel the mystery of Cranston's life, but the mysterious Shadow will do everything in his power to stop him from learning too much...
The superstar team of writers Scott Snyder and Steve Orlando and artist Riley Rossmo brings you a dark and twisty modern noir like nothing you've seen before, with a brand-new villain unlike any either hero has faced! This is the unmissable crime series of 2017, so get on board now! Co-published with Dynamite.
RATED T 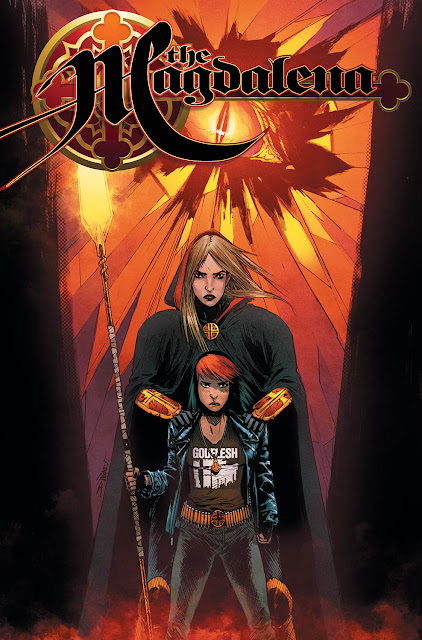 (W) Tini Howard, Ryan Cady (A) Christian Dibari (CA) Christian DiBari
"HOUSE OF FLIES"
Training a Magdalena brings the same agony as being one, as Patience struggles with the limits of her injuries and Maya tries to correct a dangerous mistake. 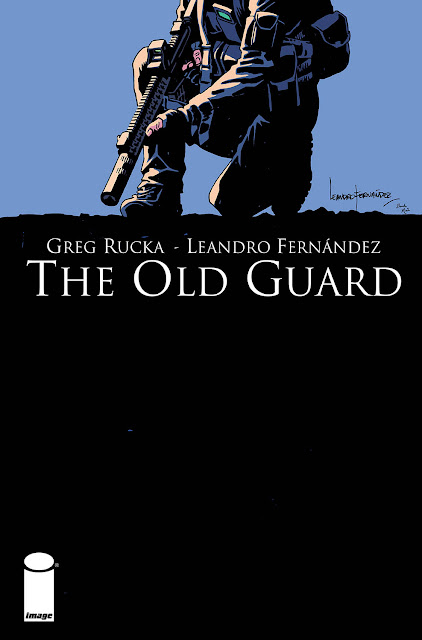 (W) Greg Rucka (A/CA) Leandro Fernandez
PART THREE
Booker gets a grenade in the lap. Andy does what she does best. Nile tries to make sense of it all. Also: A lot of shooting, some explosions, and a heartfelt declaration of love. 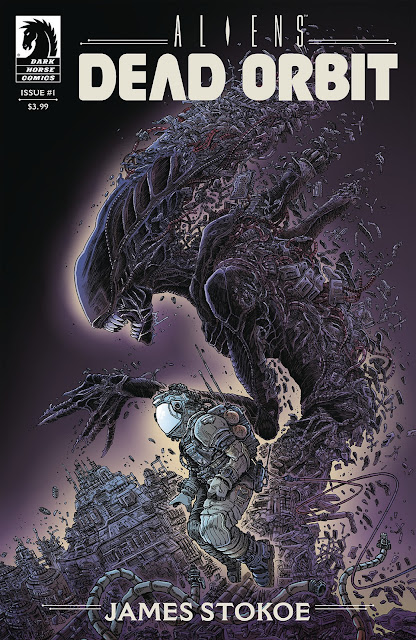 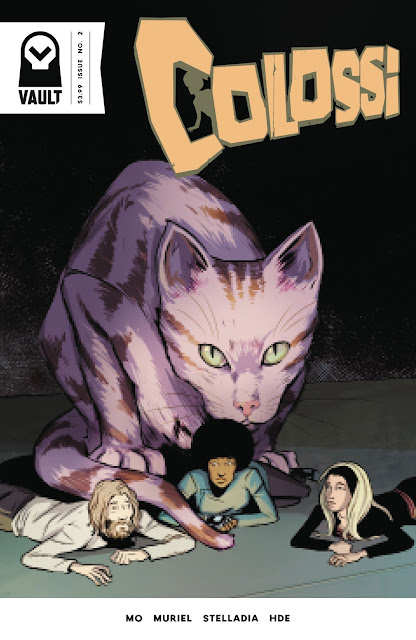 (W) Ricardo Mo (A/CA) Alberto Muriel, Amaya Diaz
Stranded on a parallel Earth. Surrounded by danger. Six inches tall. Just when you thought things couldn't get any worse for the surviving passengers of Shuttle 34, something terrible has been unleashed, and it doesn't give a damn how big you are.