'Agents of S.H.I.E.L.D.' Welcomes Back a Certain Hothead for the Season 4 Finale

'Agents of S.H.I.E.L.D.'will be heating up again as a fan favorite character will be returning for the season 4 finale.

Since Robbie Reyes (Gabriel Luna) was imbued with the spirit of vengeance from the other Ghost Rider in the season premiere, he's been the most thriling part of 'Agents.' Having sacrificed himself in a quantum explosion, taking his evil uncle,  Eli Morrow (José Zúñiga), with him during the mid-season finale, the focus has been on the Framework storyline. 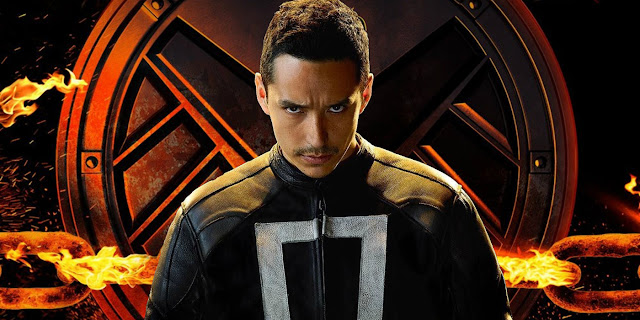 Reyes and Morrow were sucked into an inter-dimensional portal when the two fought near the particle generator his uncle created with the Darkhold. The bridge that brings him back could be the fact that AIDA used the Darkhold to create the alternative reality of the Framework. It's unknown how exactly he reappears or if he'll be aware of the altered world.

Season 4 finale airs Tuesday, May 16 and is entitled “World’s End.”


Marvel's Agents of SHIELD 4x20 "Farewell, Cruel World!" Season 4 Episode 20 Sneak Peek #2 - The clock is ticking for Daisy and Simmons to get the team out of the Framework, but not everyone is ready and willing to leave, on “Marvel’s Agents of S.H.I.E.L.D.,” Tuesday, May 2nd on ABC.