With Guardians of the Galaxy Vol. 2 opening in theaters this week, Marvel didn't hesitate to capitalize on the popular film with three new comics and one movie art book out on Wednesday.


Besides the always pull-list worthy Batman, there's a bunch of new Marvel #1 issues. Check out Jean Grey, Black Bolt, and the controversial Secret Empire. Cullen Bunn and Brian Hurtt bring The Damned #1 from Oni Press. Take a look at these and more below for this week's highlights. Happy reading! 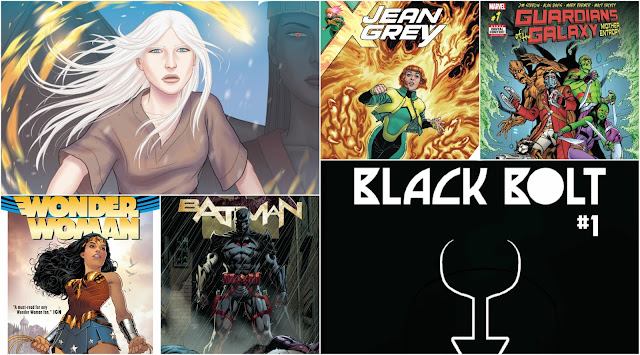 (W) Tom King (A/CA) Jason Fabok
THE BUTTON" part three! The cataclysmic events of DC UNIVERSE: REBIRTH #1 continue here! The Dark Knight and The Fastest Man Alive, the two greatest detectives on any world, unite to explore the mystery behind a certain blood-stained smiley button embedded in the Batcave wall. What starts as a simple investigation turns deadly when the secrets of the button prove irresistible to an unwelcome third party-and it's not who anyone suspects! It's a mystery woven through time, and the ticking clock starts here!
Retailers: This issue will ship with three covers

(W) Cullen Bunn (A/CA) Brian Hurtt
"Ill-Gotten": Part 1-In a Prohibition-era world where demonic princes pull the strings that make crime families dance, Eddie is a mortal with two things working for him. First of all, he can't die. Well, he can and does, quite often, but he doesn't stay down for long. Second, Eddie runs the Gehenna Room, a nightclub with a strict "no demons allowed" policy. But blessings and curses don't look all that different these days, and failing to tell the two apart can get a guy killed-over and over again in Eddie's case. So when one of Eddie's old pals shows up seeking sanctuary, Eddie knows he's in for a double-cross, and that means walking the line between salvation and damnation once more.

All New Guardians of the Galaxy #1

The Guardians of the Galaxy have taken off into space once more, on their biggest and weirdest misadventures yet! Kicking things off with the biggest heist they've ever tried, we join Star-Lord, Rocket Raccoon and company as they blast their way through the galaxy, the peacekeepers of the Nova Corps hot on their tails. And once they find themselves caught in a war between The Collector and The Grandmaster, there will hardly be time to explain why Groot can't grow any bigger, what Gamora is searching for or why Drax has sworn off violence! But don't worry, we will - with a new twice-monthly schedule, All-New Guardians of the Galaxy has space for ALL your Marvel Cosmic needs!

Guardians of the Galaxy Mission Breakout #1

(W) Christopher Hastings (A) Tigh Walker (CA) Ron Lim
• The Collector's many-worlds-famous collection is opening its doors to the public - and you won't believe the star attraction.
•  Only the Guardians can break through Taneleer Tivan's security and BREAK OUT!
•  The Marvel Universe story of Disney's newest, raddest ride!

Guardians of the Galaxy Mother Entropy #1

(W) Jim Starlin (A/CA) Alan Davis
• The Guardians owe everyone on Knowhere money, so they're forced to do a job for the local police.
•  But that gets them running afoul of Pip the Troll and a mysterious entity known only as Mother Entropy. And that's when the fun begins.

(W) Saladin Ahmed (A/CA) Christian Ward
THE KING OF THE INHUMANS' FIRST SOLO SERIES!
Black Bolt imprisoned! But by who? And where exactly? The answers to both will shock you! But to learn those answers, Black Bolt must first win a fight to the death with a fellow inmate - The Absorbing Man! Award-winning science fiction writer Saladin Ahmed (Throne of the Crescent Moon) crafts a story as trippy as it is action-packed, with truly mind-bending art from the one and only Christian Ward!

(W) Dennis Hopeless (A) Victor Ibanez (CA) David Yardin
When a teenage JEAN GREY traveled through time and arrived in the present, she learned the terrible fate that befell her predecessor: Possessed by a cosmic entity called the Phoenix, Jean was trapped in an endless cycle of life and death. Determined to escape that future, Jean set out to write her own destiny. But now, she's visited by a premonition that the Phoenix is coming for her...and in this new ongoing series by DENNIS HOPELESS (ALL-NEW X-MEN, SPIDER-WOMAN, X-MEN: SEASON ONE) and VICTOR IBANEZ (EXTRAORDINARY X-MEN, STORM), she's going to fight tooth and nail to escape becoming its next victim!

(W) Nick Spender (A) Steve McNiven (CA) Mark Brooks
It's been building for months, across a bevy of titles! But now, the moment has arrived for Steve Rogers to step into the light and declare his allegiance to Hydra! How can the heroes of the Marvel Universe cope with this shattering betrayal by the most trusted figure among them? And what will this mean for the world? The map of the Marvel Universe changes in ways nobody will expect - TRUST THE SECRET EMPIRE!

(W) Sarah Vaughn, Jonathan Luna (A/CA) Jonathan Luna
JONATHAN LUNA (ALEX + ADA, THE SWORD, Spider-Woman: Origin) and SARAH VAUGHN (ALEX + ADA, Deadman: Dark Mansion of Forbidden Love, Ruined) return with ETERNAL EMPIRE, a fantasy epic! The Eternal Empress has waged war against the countries of Saia for over one hundred years and now her sights are set on the last country standing. Within the brutal Empire's workforce, a young woman receives strange visions that give her the courage to escape her fate...or run straight toward it.

(W) Chris Warner (A) Francisco Ruiz Velasco (CA) Doug Wheatley
Space aliens have been coming to Earth for centuries-but not with any message of brotherhood or peace. They're here to hunt the toughest, most dangerous humans they can find. Only now their former prey have teamed up against them. Predators, watch your backs!

(W) Garth Ennis (A) Steve Dillon, Carlos Ezquerra, Steve Pugh, Peter Snejbjerg, Richard Case (CA) Glenn Fabry
In these tales from PREACHER #27-40, presented in DC's Absolute format for the first time, Jesse and Tulip are reunited at last. Together with Cassidy, they head for New Orleans in the hope of finding the secret buried in Jesse's psyche. And while Cassidy and Tulip face the painfully pretentious Enfants du Sang, Jesse taps into some dark magic-all while Herr Starr gathers his forces against the trio. And, against all odds, Arseface finds fame as a singer! Also includes THE SAINT OF KILLERS #1-4 and the specials ONE MAN'S WAR, CASSIDY-BLOOD AND WHISKEY, THE GOOD OLD BOYS and THE STORY OF YOU-KNOW-WHO.
Cover Price: $150

(W) Ed Brubaker, Various (A) Various (CA) Marko Djurdjevic
The critically acclaimed, award-winning creative team of Ed Brubaker and Michael Lark concludes its explosive run! The Hand is back in New York and in league with Lady Bullseye! The Kingpin has also returned, forging a surprising pact with Daredevil to target the ninja cult - but what is the former crime boss's true plan? Plus: An old friend brings Matt Murdock the last-minute appeal of a villain on death row. What will Matt do when confronted with a convicted bad guy who's completely innocent? Also featuring the threat of the Owl, and an unlikely new ally: The Black Tarantula! Plus: One of the most surprising endings in Daredevil's history! Collecting DAREDEVIL (1998) #106-119 and #500, DAREDEVIL ANNUAL (2007) #1, and DAREDEVIL: BLOOD OF THE TARANTULA.
Cover Price: $75

Wonder Woman Rebirth TP Vol 2 Year One
(W) Greg Rucka (A) Bilquis Evely (A/CA) Nicola Scott
The team of writer Greg Rucka and artist Nicola Scott weave the definitive and shocking tale of Diana's first year as Earth's protector. Paradise has been breached, Ares stirs and the Amazons must answer with a champion of their own...one who is willing to sacrifice her home among her sisters to save a world she has never seen. Wonder Woman's journey begins in this epic origin story! Collects WONDER WOMAN #2, 4, 6, 8, 10, 12 and 14.
Cover Price: $16.99

Marvels GOTG Art of the Movie Slipcase HC Vol 2
(W) Jacob Johnston (A/CA) Various
The Guardians are back! After saving the universe, Star-Lord, Gamora, Drax, Rocket and Groot find themselves with expunged records and a new mandate: Guard what needs guarding. Now, go inside the Marvel studios in this new collectible volume! Discover exclusive concept art, production stills, and commentary from cast and crew - including returning director James Gunn and Marvel's extraordinary Visual Development team. Complete your ART OF THE MOVIE collection with this latest installment as the Guardians soar to new heights!
Cover Price: $50

Champions TP Vol 1 Change the World
(W) Mark Waid (A/CA) Humberto Ramos
One of the great team names in Marvel history returns, in incredible new fashion! After the fallout of CIVIL WAR II, Ms. Marvel, Nova and Spider-Man quit the Avengers and strike out on their own! Along with Viv Vision and the Totally Awesome Hulk, these young heroes are determined to change the world their own way - and they're only the beginning! It starts as an idea. It becomes an ideal. But what happens when it turns into a movement - one so big even the Hulk can't stop it? Will one of the greatest X-Men of all forge a new future by their side? Will the Unbelievable Gwenpool be friend or foe? It's a super-team book for a new generation! Collecting CHAMPIONS (2016) #1-5.
Cover Price: $15.99


Dragon Ball Super GN Vol 1
(W) Akira Toriyama (A/CA) Toyotarou
Having defeated Boo, Goku is starting to get bored with his life on Earth. His wife, Chi-chi, wants him to get a job, but all he wants to do is train and fight stronger enemies. Elsewhere in the universe, the God of Destruction, Beerus, and his attendant Whis are traveling from planet to planet in search of food and entertainment. After blowing up some hapless victims, Beerus is reminded of a man from his dreams with the moniker "Super Saiyan God," or something like that... The God of Destruction sets his sights on Earth to track down this mysterious man! Maybe this will give Goku something to do?
Cover Price: $9.99


Jojo Bizarre Adventure Stardust Crusaders HC Vol 3
(W) Hirohiko Araki (A/CA) Hirohiko Araki
Synopsis    Our heroes have made it to India! And if their enemies don't get them, the culture shock will! But before they even have time to settle in, evil Stand users are upon them. If you thought the enemies they fought before were strange, wait until you see what they're up against now. The trippiest road trip ever continues!
Cover Price: $19.99


My Hero Academia GN Vol 8
(W) Kouhei Horikoshi (A/CA) Kouhei Horikoshi
The U.A. students have reached the practical portion of their final exam, but they didn't expect to have to beat their own teachers in order to pass! Paired with his archrival Bakugo, Midoriya has to try to take on none other than All Might himself. Working with Bakugo is one thing, but is giving everything he's got to beat All Might more than Midoriya can handle? And in a nearby arena, Yaoyorozu and Todoroki endure a similar struggle. All the while, a sinister new adversary prepares to make a move...
Cover Price: $9.99
Email Post
Labels: comic books Dark Horse Comics DC Comics image comics Marvel ncbd new releases oni press