This week in comics is full of action and adventure. Start with Valiant's newest event SECRET WEAPONS #1, followed by XO MANOWAR #4, then check out Black Mask's NO ANGEL, go straight for BLACK PANTHER #15. If you're more into mystery see CLUE #1 from IDW and the finale of THE DREGS from Black Mask. Don't forget to pick up DC Comics' latest mash-ups BATMAN/ELMER FUDD and JONAH HEX/YOSEMITE SAM. You can't lose this week. Happy reading! 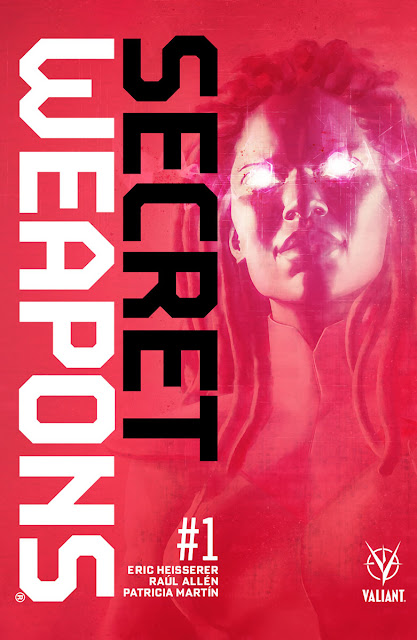 (W) Eric Heisserer (A/CA) Raul Allen
Academy Award-nominated screenwriter Eric Heisserer (Arrival) joins Harvey Award-nominated artist Raúl Allén (Wrath of the Eternal Warrior) for Valiant's next prestige format limited series, starring Livewire and an extraordinary new team of heroes! The government has dispatched Amanda McKee - the technopath codenamed Livewire - to investigate the ruins of a secret facility formerly run by Toyo Harada, the most powerful telepath on Earth and her former mentor. In his quest for world betterment at any cost, Harada sought out and activated many potential psiots like himself. Those who survived, but whose powers he deemed to have no value to his cause, were hidden away at this installation. But Livewire, having studied Harada's greatest strengths and learned his deepest weaknesses, senses opportunity where he once saw failure. A young girl who can talk to birds... A boy who can make inanimate objects gently glow... To others, these are expensive failures. But, to Livewire, they are secret weapons...in need of a leader. Now, as a mechanized killer called Rexo seeks to draw them out, Livewire and her new team of cadets will be forced to put their powers into action...in ways they never could have imagined... 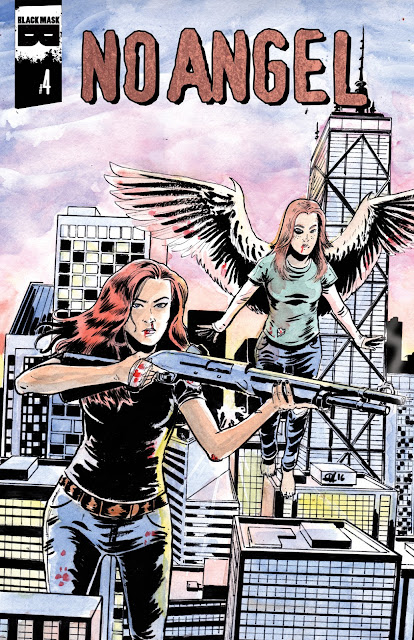 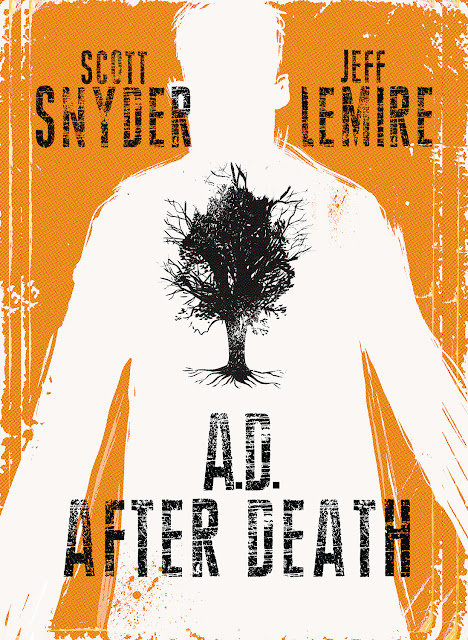 (W) Scott Snyder (A/CA) Jeff Lemire
What if we found a cure for death?
Two of comics' most acclaimed creators, SCOTT SNYDER (WYTCHES, Batman, American Vampire) and JEFF LEMIRE (DESCENDER, PLUTONA, Moon Knight, Sweet Tooth) unite to create an epic like no other, set in a future where a genetic cure for death has been found. Years after the discovery, one man starts to question everything, leading him on a mind-bending journey that will bring him face-to-face with his past and his own mortality.
A unique combination of comics, prose, and illustration, A.D.: AFTER DEATH is an oversized hardcover graphic novel written by SNYDER and fully painted by LEMIRE.
Trim Size -- 8.375" x 10.1875"
Collects AD: AFTER DEATH #1-3. (W) Andy Mangels (A) Judit Tondora (CA) Cat Staggs
Bullets & Bracelets & Bionics! If it's always darkest before the dawn, Wonder Woman and the Bionic Woman - along with some familiar faces - had better pray that the dawn comes soon. Because from where the story continues, things look awfully dire. The evil cabal of villains have sprung their trap, and have staged a monumental assault, and one major character is already badly hurt. Our heroines will soon find that nothing is unbreakable! The best-selling team-up fans demanded is written by best-selling author ANDY MANGELS (Star Trek & Star Wars) and illustrated by JUDIT TONDORA (Grimm Fairy Tales). 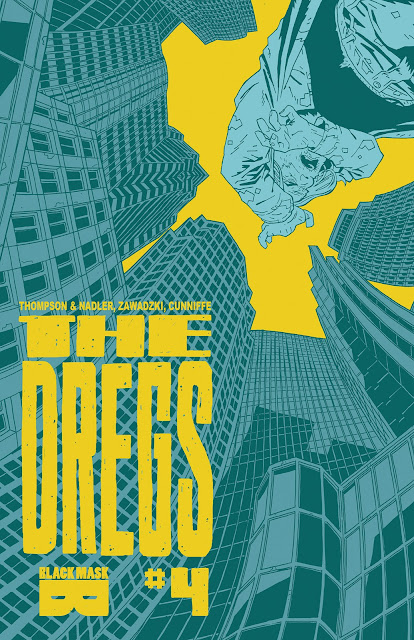 (W) Lonnie Nadler, Zac Thompson (A) Eric Zawadzki (CA) Dariusz Zawadzki
An archetype lost in architecture. This is how the story ends whether you like it or not. 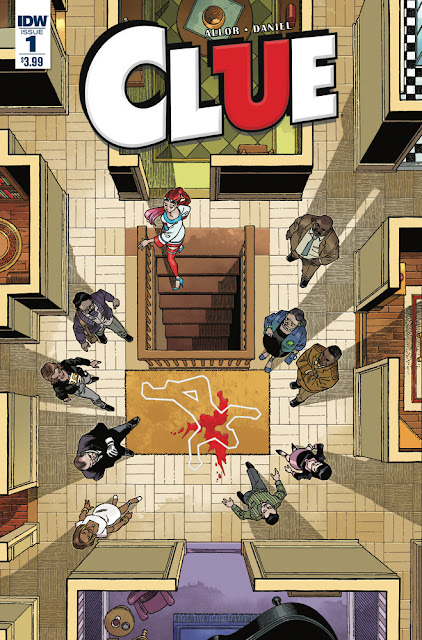 (W) Paul Allor (A) Nelson Daniel (CA) Gabriel Rodriguez
When the mysterious Mr. Boddy turns up dead at his own dinner party, everyone's a suspect! Miss Scarlett, Colonel Mustard, Mrs. Peacock, Professor Plum-all the familiar faces from the famous board game are back, with a couple new twists. But will Boddy's Body be the last to fall, or is it just the beginning? Follow the clues and solve the mystery in IDW's new CLUE series!
•  A NEW TAKE ON THE CLASSIC DETECTIVE GAME-WITH NEW DESIGNS BY ARTIST NELSON DANIEL UPDATING ALL THE CLASSIC CHARACTERS!
•  Featuring three alternate endings! To help you get a clue, we've hidden multiple endings to this first issue across the regular and subscription variants that will help you solve the case! 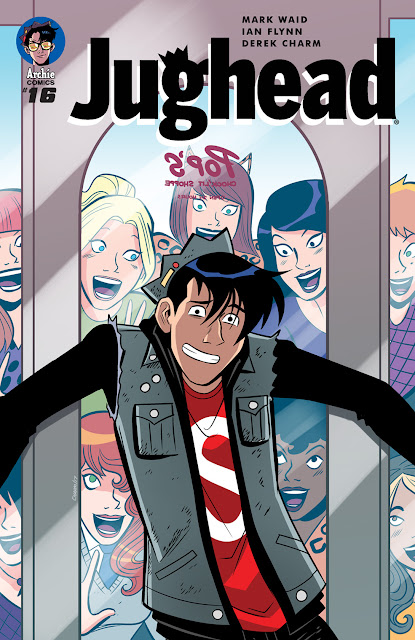 (W) Mark Waid, Ian Flynn (A/CA) Derek Charm
"Music, Magic & Mayhem" Part Two: Everyone is after Jughead!  What sort of witchcraft has befallen our crowned hero, making him Riverdale's #1 target? Jughead finds himself in a mosh pit of doom in this special issue featuring Sabrina, Josie & the Pussycats, ZOMBIES and so much more! 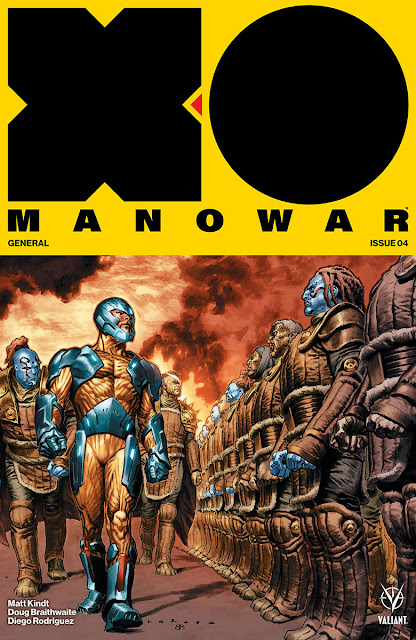 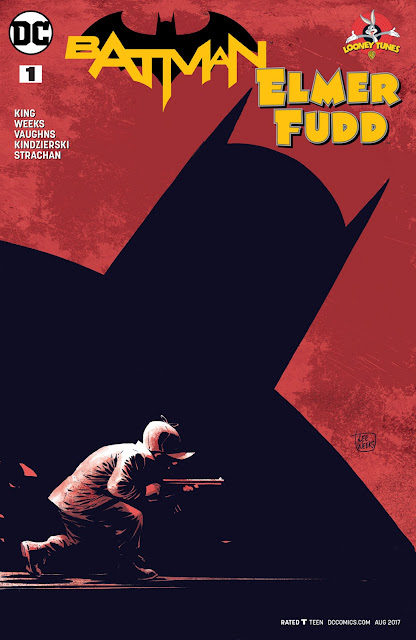 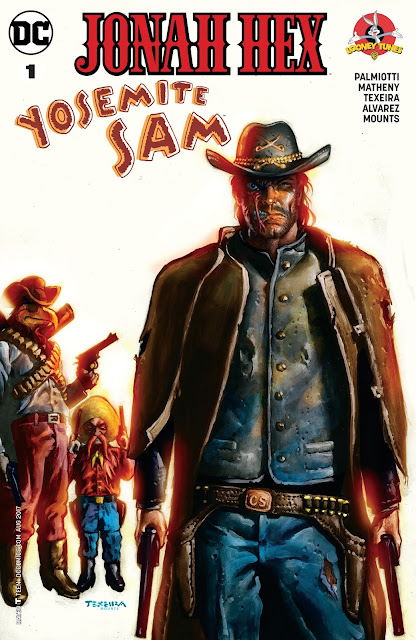 (W) Jimmy Palmiotti, Bill Matheny (A) Dave Alvarez (A/CA) Mark Texeira
When miner Yosemite Sam strikes it rich, word gets out as everyone comes gunning for his wealth! To protect himself and his new riches, he hires bounty hunter Jonah Hex--but the man protecting him may be his worst nightmare! And the bonus Looney Tunes backup story features DC characters written by Bill Matheny and artwork by Dave Alvarez.
RATED T 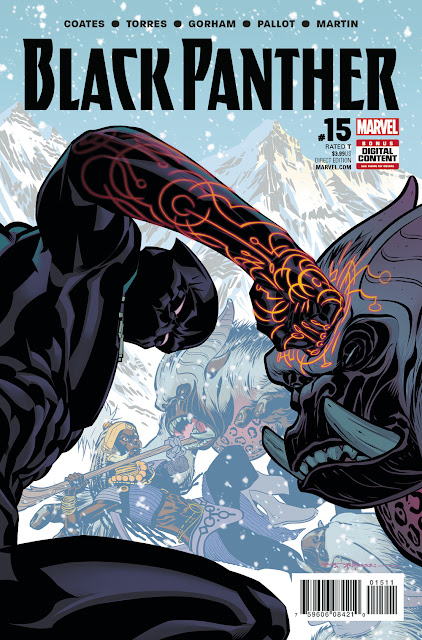 (W) Ta-Nehisi Coates (A) Wilfredo Torres, Adam Gorham (CA) Brian Stelfreeze
"AVENGERS OF THE NEW WORLD" CONTINUES!
•  The gods of Wakanda have forsaken T'Challa and his nation.
•  As monsters of might and myth flood our world, the Midnight Angels must act...
•  But whose interests do they serve? The crown's or their own?
Rated T 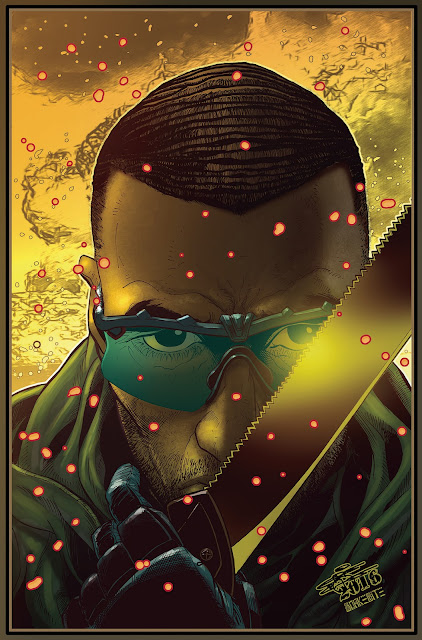 (W) Alex De Campi (A/CA) Chris Cross
Marcus King: modern-day Robin Hood or terrorist? Maybe both? When Marcus comes face to face with an adversary who knows all of his carefully buried truths, he's forced to become the man he has always pretended to be. And punch a small army of dudes. And blow up stuff. Lots of stuff.
o Written by Eisner nominee Alex de Campi (Archie vs. Predator).
o Art by ChrisCross (Convergence: Justice League of America). 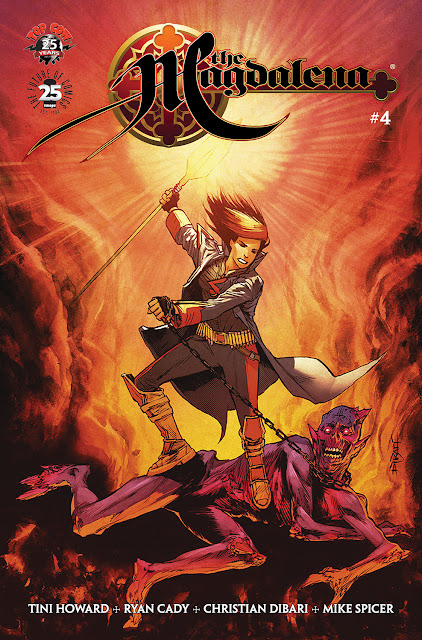 (W) Tini Howard, Ryan Cady (A) Christian Dibari (CA) Christian DiBari
END OF STORY ARC
That which should be bound has been freed, and that which needs to fight has been detained. Demons may have us in numbers, but God's on our side. Our first testament ends here. 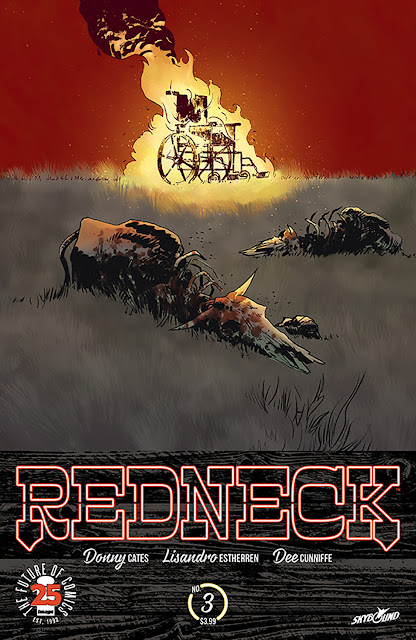 (W) Donny Cates (A/CA) Lisandro Estherren
What lurks in the attic of the Bowman house? With everything going to hell for his family, Bartlett must confront the one sonuvabitch that puts fear in other vampires. And what exactly do the Bowman boys have planned for Father Landry? 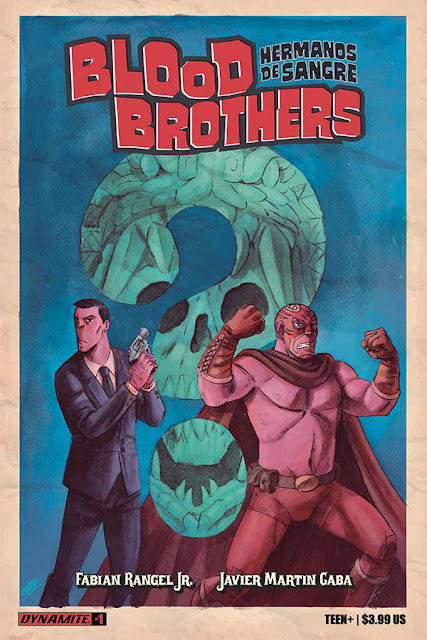 (W) Fabian, Jr. Rangel (A/CA) Javier Caba
Diego and Gabriel Soliz are two unusual brothers just trying to do their job in an even more unusual city. What's their job? They're detectives in a city populated by creatures from mythology and fantasy. When an Aztec skull is stolen from the museum, the BLOOD BROTHERS are assigned to the case! 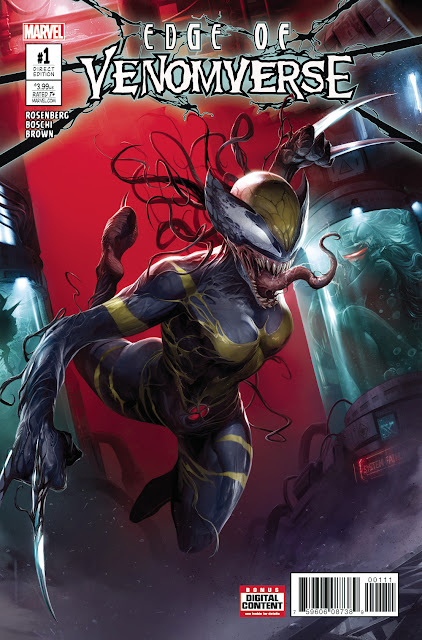 (W) Matthew Rosenberg (A) Roland Boschi (CA) Francesco Mattina
EDGE of VENOM-VERSE starts here!
The series that sets up the epic VENOM EVENT of 2017 STARTS HERE! Each issue introduces another major Venomized character that will feed into VENOMVERSE itself! THIS ISSUE, the young mutant clone designated X-23 collides with a cryogenic tube containing a strange alien symbiote during her frenzied escape from The Facility, . Bonding with the alien enhances her already considerable abilities, and aids in her escape, but it begins to alter her mind! On the run from the very people that made her, can X-23 hold it together or is she doomed to give in to Venom!
Rated T