When Valiant announces a major event you know they're going to deliver. HARBINGER RENEGADE #5 is the beginning of the end for the Valiant universe as we know it as the latest battle between the government and psiots comes to the Free City of Rook and results in some devastating casualties. It's the perfect jumping on point. 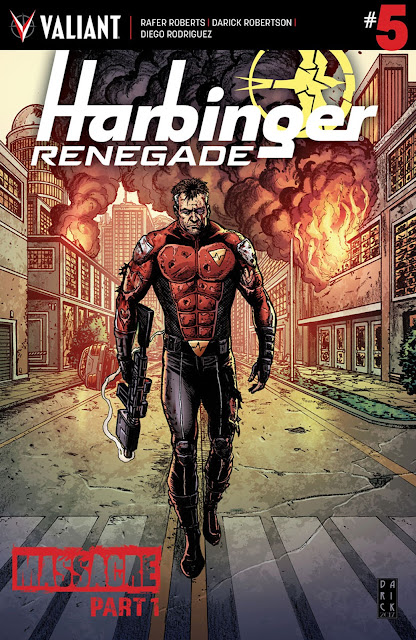 [Editor's Note: Due to time constraints this week, reviews will be brief but hopefully to the point.]

Valiant has promoted this issue as a game-changer because of a significant hero death and it is mind-blowing. The whole issue is an action-packed and tense stand-off between the government-backed Hard C.O.R.P.S and the embedded guardians of old Detroit now known as Rook. Generation Zero is leading the charge on the ground with the philosophy of "a good offense is a good defense."

What transpires is pulse-pounding, violent, and bloody as hell. It's as dramatic and emotionally draining as you'll see in comics. Rafer Roberts has executed a tricky story from the Hard C.O.R.P.S. point of view and are forced to understand their side while also rooting for Generation Zero and the psiots. The battle is a serious and deadly confrontation as promised. Darick Robertson and Diego Rodriguez bring it all to life with the energy, tension, detail, color, and drama that a seismic event like this deserves.