The reinvention of 'Magnus' at Dynamite by Kyle Higgins and Jorge Fornés has yielded one of the best detective stories in comics. 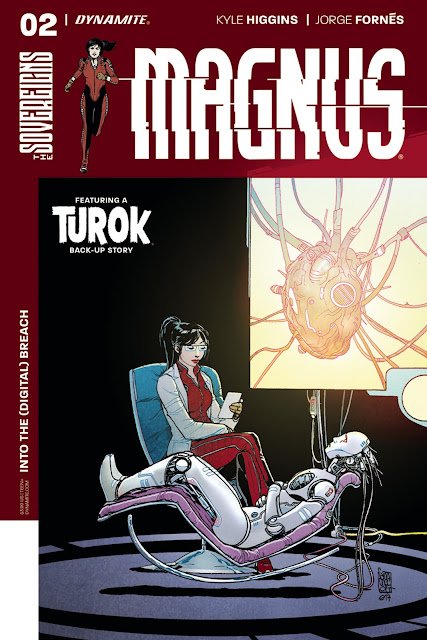 Ever since Frederick, an A.I. android, brutally murdered his owners (they were kind of dicks, though) robot whisperer, not "Robot Fighter" as in past iterations, psychologist Kerri Magnus has turned bounty hunter to bring the killer to justice. She's had to go down this rabbit hole of intrigue and tension as A.I. units seek their independence from their human overlords. They even have their own artificial world in the cloud that gives them some respite from their stupid slave owners. It's also the world Magnus has to navigate in order to track down Frederick but will androids obstruct her investigation as a sign of solidarity to robot-kind?

Higgins weaves an intricately paced mystery inside a fully formed world where the public is on the verge of rioting against these android helpers out of fear of a robot-apocalypse. Magnus is a great character who's not only smart and centered, she also carries with her some guilt and other emotional baggage that all great detectives carry. She enlists the help of an old "friend" with a destroyed data file that needs to be reconstituted. The meeting is chilly and awkward as it should be as the two have an unresolved past. It's one of the best scenes in the book. If you like 'Blade Runner,' 'Magnus' should be on your pull list right now.

Jorge Fornes has created two worlds, a real one, and a virtual one. It is steeped in film noir elements that Fornes excels in. Again, I go back to the scene involving Magnus and her friend and the way the scene is "lit," shadows are created that just smolder along with Higgins' script. The character designs are brilliantly imagined giving the androids human features but not completely, just enough to remind you that they're not human at all but a machine that is constantly learning. Fornes knows how to lay out a story. Even the dialogue heavy scenes move with enough energy to seem like you're watching a tennis match in essence. Chris O'Halloran's colors fit the motif to a tee. Cool, smooth and electric. O'Halloran is the lifeblood in Fornes' pencils. Higgins and Fornes make a great tandem where script meets art.

'Magnus' is not your ordinary "Magnus: The Robot Fighter" story because it's not that Magnus, it's something better in this latest incarnation. Kerri is a fighter of sorts, fighting for justice and the truth but using her mind instead of her fists. Higgins and Fornes have created an immersive murder mystery that is electric and intriguing from the first page to the last. You won't find a better sci-fi mystery in comic shops if you tried.