This wouldn't be 'Postal' without a major scheme in the works by someone in the criminal haven known as the town of Eden. The fact that it's coming from Mark and Maggie is the surprising part. Meanwhile, Laura has her hands full trying to maintain her grasp on the town. Bryan Hill and Isaac Goodheart bring another exciting chapter in this briskly paced issue. 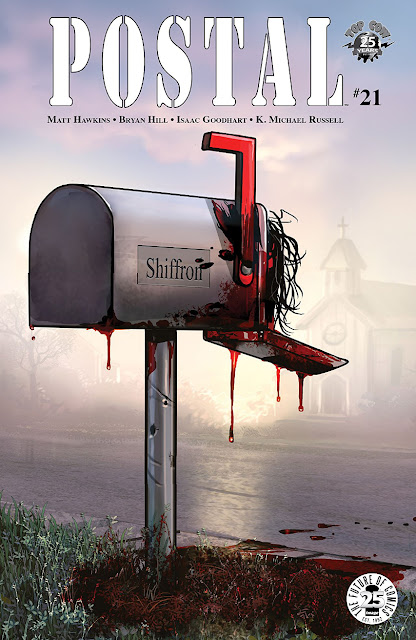 Watching Mark and Maggie coupled up is a little weird but feels right. After all the drama they've been through it would only seem just for them to finally come together. They've had a seemingly unbreakable bond amid a neo-Nazi attack, the murders of the psychopathic daughter of the FBI director, and a near rebellion against Mark as the interim mayor. With all that out of the way, Mark and Maggie can finally decompress. However, Maggie may have some reservations about moving too fast.

Meanwhile, Director Schultz is pretty shaken up from his "meeting" with Agent Tremble and Isaac Shiffron. Their "hands-on" approach to getting info from Schultz may have worked and compromised him. How is Laura Shiffron going to handle the pressure? Hill is once again setting up an exciting new twist that could leave Eden's future in the balance. What Mark has concocted could be a game-changer for him personally and a surprising turn for someone who is so vital to the town of Eden and his mother the mayor.

A flashback informs the history between Laura and Schultz that sheds some light on what made that connection so important. Hill is full of surprises and this latest plot line is a lit fuse for another explosive arc. It's a breezy issue but one that makes some major revelations and a cool new direction for Mark.

As usual, Isaac Goodhart delivers another clean and potent layout of art that propels the story with energy and varied perspectives. Faced with a number of different locations in this issue, Goodhart fleshes each out with detailed background work. K. Michael Russell does a great job providing the perfect color tone to each situation. Darker ominous tones for the nighttime interrogation, bright pastels during the morning sky, and sepia tones for the flashback.

Bryan Hill is the master of his domain and Eden is his playground. This is another compelling chapter that will suck you in even if you're new to the series. 'Postal,' much like addictive television dramas like 'Breaking Bad' and 'Fargo,' ensnares you in the trappings of another devilish plot to come up amid some opposing force. 'Postal' continues to surprise with some of the best crime drama in comics.