The plot thickens as they say, as Sam courts death on her revenge mission against the most powerful man in the world. 'Samaritan Veritas' #2 continues the fast-paced action and intrigue as the people on Sam's tail inch closer and closer to take her down. 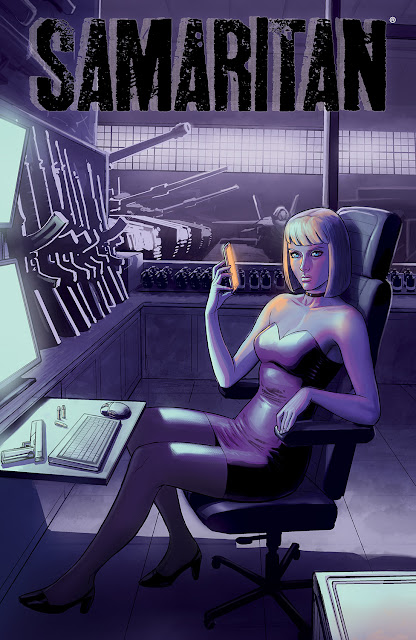 Like an episode of 24, a lot happens in this issue with multiple chess moves taking place. Sam may have overestimated the layers of protection she's created for herself. She soon realizes she's not as invisible as she thought. Her attempt to kidnap a close ally of the corrupt president goes awry, she's back on the run after a failed assassination attempt against her. They're on to her. Dwayne tries to warn her but will her confidence get her killed? It's a pulse-pounding issue where the cat-and-mouse game she's playing gets more complicated. Matt Hawkins injects a lot of information even a tutorial on "rare earth metals." The foreshadowing helps to build out this world establishing the corporate stake in this broad conspiracy.

Atilio Rojo does an impressive job of conveying the speed at which the events are happening. Using dynamic layouts and perspectives there isn't a dull panel in the book. It's an action movie in sequential art. Think of Jason Bourne, James Bond, and Mission Impossible movies and the pace they move at. 'Samaritan' has that vibe beautifully illustrated by Rojo. His color work also shines providing a bold and distinctive palette.

'Samaritan: Veritas' is a complex and smart thriller that demands your attention. Sam's revenge won't come easy as her pursuers close in. We want to see the villains pay but is Sam too cocky for own good? She's a few steps ahead of her enemies for now but as issue two shows, they are determined to quiet her for good. Immersive, intriguing, and intense, 'Samaritan' is a solid thriller worth diving into.