Writer Shawn Aldridge (The Dark and Bloody), and artist Rapha Lobosco (Doctor Who) have been selected as the creative team to helm what is sure to be the biggest hit of this year's Halloween season, Hack/Slash vs. Vampirella. With the blessing of Hack/Slash creator Tim Seeley, the two heroines of horror are set to hit shelves October 4th, 2017! 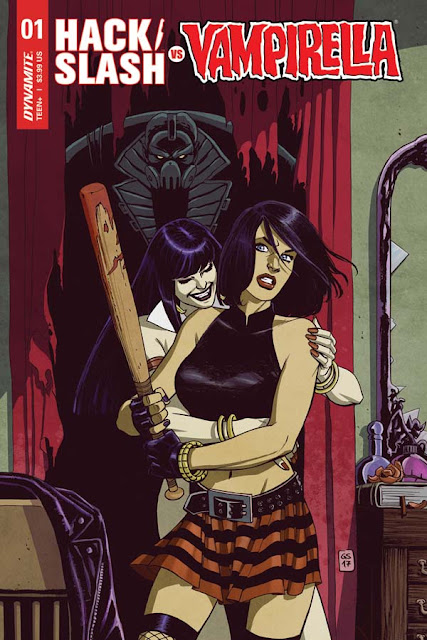 Created by writer/artist Tim Seeley and Stefano Caselli, Hack/Slash harkens back to the classic 80's slasher flick, as it follows the story of young Cassie Hack, the very epitome of horror movie clichés: the young woman and lone survivor at the end of every horror movie who then channels her emotional trauma into becoming the ultimate "killer of killers" herself! "Along with a burly protector named Vlad, Hack travels across the country hunting slashers in the vein of Halloween's Michael Myers, Friday the 13th's Jason Voorhees and A Nightmare on Elm Street's Freddy Krueger."

Now, the Vegas strip heats up as Cassie Hack, accompanied by her protector Vlad, are on the trail of a deadly slasher and meet the lovely, yet lethal Vampirella. The team-up event you've been waiting for is a high-stakes game of chance when they have to take on The Queen of Hearts! 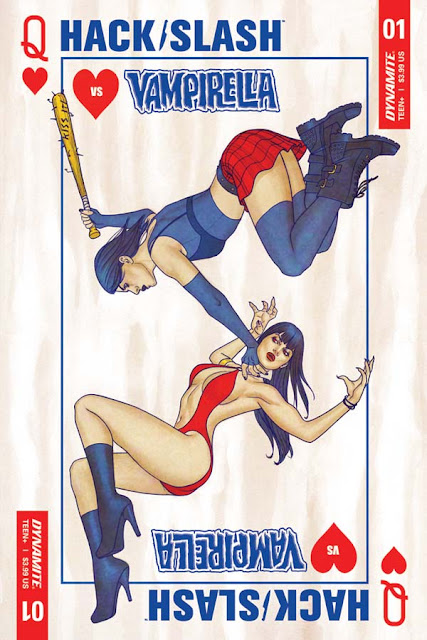 Hack/Slash creator Tim Seely said, "Vampirella is the original horror exploitation heroine, and it's been a goal of mine since I started Hack/Slash back in 2004 to have her team up with Cassie and Vlad! Dynamite has recruited some awesome talent to handle this never-before-seen tale, which will tie back to the new Hack/Slash series from Image.

Writer Shawn Aldridge said, "Ever have one of those days when Tim Seeley unexpectedly emails you saying he really enjoyed your book (The Dark and Bloody) and asks if you want to write a Hack/Slash mini and before you even finish the s in yes, he goes, ‘Oh, yeah, and Vampirella will be in it?' No? Huh, well, I did. And I'm over the moon (or is that Drakulon?) about the chance to tell a tale about an icon of horror in Vampirella and one of the best duos in horror in Cassie and Vlad. I hope my excitement comes through in this fun tale of the Blood Red Queen of Hearts ripping people's hearts out in Las Vegas." 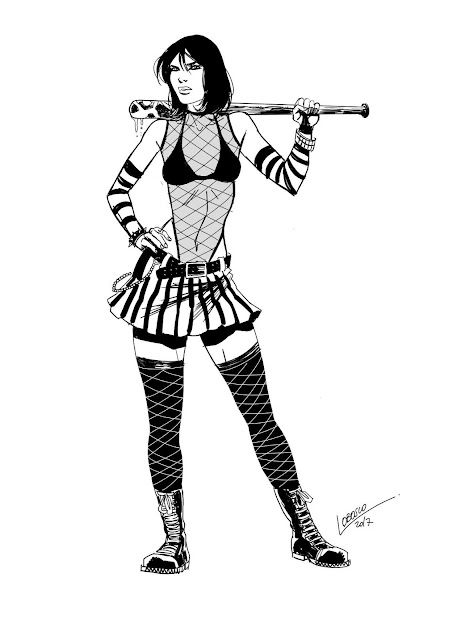 Kentucky-born, Oregon-based writer Shawn Aldridge is best known for the horror mini-series The Dark and Bloody (Vertigo/DC) and his creator-owned series Vic Boone. His work has also appeared in American Vampire Anthology Vol 2 (Vertigo/DC), Dark Horse Presents (Dark Horse) and FUBAR (Fubar Press). He has one wife, one kid, three dogs, and a lot of stories to tell.

Artist Rapha Lobosco said, "What got me really excited to work on Hack/Slash vs. Vampirella is the possibilities I'll have while drawing the pages. As a big fan of horror comics, I always was fascinated by how those stories are told in comics, how the mood is set up using light and shadows, the way you can play with the layout of a page. Also, Vampirella was always one of my favorite characters, she's been here for a long time and it never gets old - I remember looking at Frazetta's drawing and being amazed by it. By putting her together with Cassie and Vlad I believe we going to have a series with a lot of action! It's going to be loads of fun!" 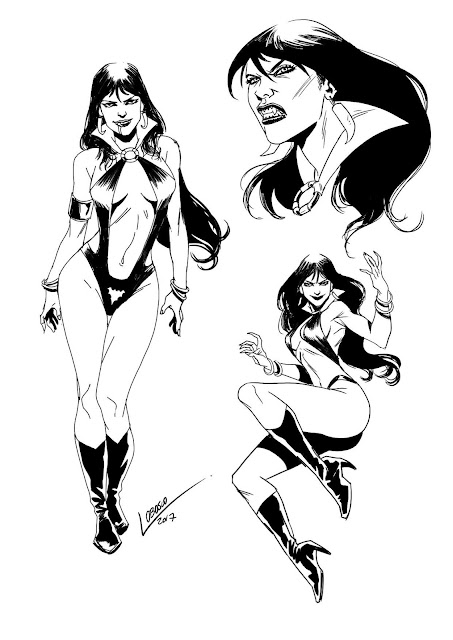 Brazilian comic artist based in Dublin, Rapha Lobosco stood out with his work being published on a few indie comics in Ireland and UK before working as an inker on the 11th Doctor Who for Titan Comics, after that he started to work on the 007 James Bond: Black Box for Dynamite with writer Benjamin Percy and colorist Chris O'Halloran.

Dynamite Editor Kevin Ketner said, "Getting to see Cassie and Vlad team up with Vampirella is kind of a dream come true for a horror nerd like myself. It's times like these that I'm really glad that I'm not a demon here on earth trying to cause havoc, because I would honestly be afraid to find out they were working together against me. Shawn and Rapha are doing a beautiful job blending these worlds and giving us a scary, but an incredibly fun story and I can't wait for everyone to check it out." 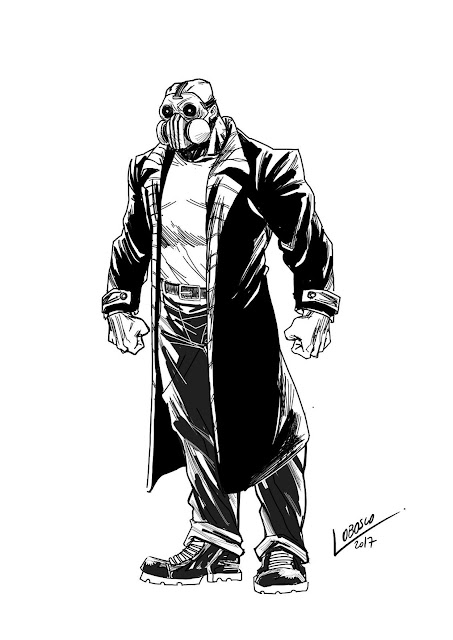 "Tim Seeley's Hack/Slash was an instant horror classic, so it was a no-brainer that his now iconic characters should meet-up with the foremost horror heroine of all - Vampirella," said Nick Barrucci, CEO and Publisher of Dynamite. "Fans of both series will love as they join forces to confront horrors they themselves could not imagine!  Shawn Aldridge and Rapha Lobosco are both incredibly talented, and their work is guaranteed to capture these characters in a way any true fan of horror will enjoy!"