If you're not reading 'Shirtless Bear Fighter' you're missing one of the most entertaining comics available. It's silly, over-the-top, and full of bare-knuckle bear punching. Shirtless is being held hostage by evil Fuzzy Wipes CEO Jaxson Logger and the only person that can save him is FBI agent Suzie Silva. 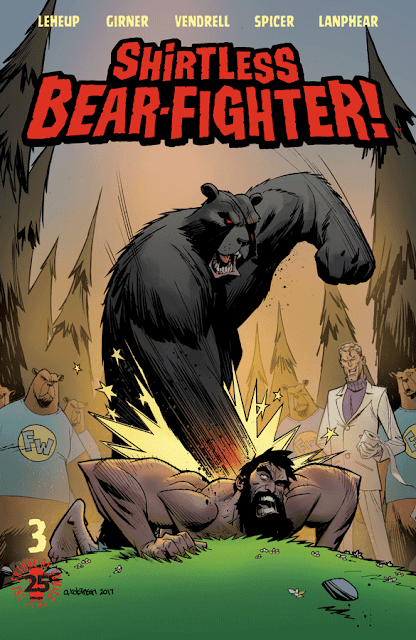 
After a brief but cute opening flashback to Agent Silva's childhood, we see the adult Silva scoping out the Fuzzy Wipes factory where Shirtless is being held. Wearing a t-shirt, his one weakness, Shirtless is bound and gagged with Logger in full menacing super-villain mode about to monologue his evil plan for deforestation to fuel his world domination of wet wipes. Yes, you've read that right.

It's this kind of reverence for action movie tropes that carries 'Shirtless Bear Fighter' but it's also smart and funny with an emotional undertone. In this issue, a lot of Shirtless' anger is explained. Being raised by bears and his eventual exile was bad enough but the murder of his girlfriend put him over the edge. That trauma is now being exploited by Logger and his minions especially an old adversary of Shirtless. This is the darker revelation that writers Jody LeHeup and Sebastian Girner establish to make Shirtless a sympathetic character and more than just a naked bearded rage monster attacking bears at the drop of a hat. There's more to Shirtless than meets the eye issue 3 explores more of his motivations and his capacity to care for others while still punching bears.

Nil Vendrell elevates the series with some beautifully designed pages and crisp, clear, and clean line work. Shirtless is larger-than-life and so is the setting. Everything is dramatically portrayed with larger close-ups and wider views than brings the action off the page and into your lap. Mike Spicer's colors are bright and bold, electrifying each scene. The art team does a great of bringing a fun cartoonish appearance that relies on exaggerated facial expressions and over-the-top action sequences.

'Shirtless Bear Fighter' is all kinds of wacky and undeniable fun with an emotional core. That heart is never more present in this issue as Agent Silva returns the favor and saves Shirtless. This is another wild ride full of evil monologuing, betrayal, and what else, bear punching!