'Crosswind' #4 delves deeper into the situations that Cason and Juniper have found themselves in. The fates of both are increasingly in danger just as Cason as Juniper begins to stabilize the domestic life. Juniper as Cason has a target on his back and a deception that could cost a life before the two return to their rightful bodies. 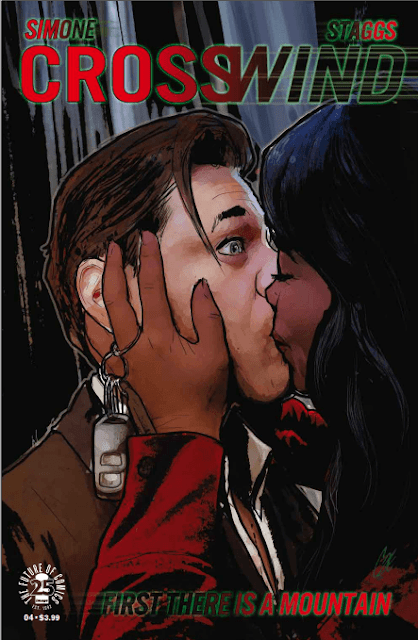 The last issue was a satisfying chapter but things get inevitably messier. Cruz is out to get Cason for sleeping with his fiance Mika and making sure he keeps quiet about killing the idiotic son, Siggy, of the mob boss. He's got to play Mr. Randolph against Cason now and it's sure to set some deadly actions in motion. Meanwhile, back in suburbia, Cason just set Juniper's husband straight about his philandering. He needs help getting away as a woman so he enlists the help of a transgender woman down the street who saw her run over those rotten kids previously in the series. She helps him apply makeup as the two make peace and nurture a new friendship. A fantastic turn to show transgender people in a positive light and included as part of daily life. It seems Cason is enjoying himself until he gets a call from Juniper.

You can't help but feel for Juniper who, as Cason, experiences respect for the first time. She finally knows what it feels like when people listen to her. Sure, it's born out of fear for what Cason is capable of but when Mika genuinely asks him what's the matter it's a shock to Juniper. No one ever asks the old Juniper what she felt or thought. It's the one part of this whole body-switching debacle she embraces.

What else is there to say about Cat Staggs and her wonderful art? She continues to turn in some of the most dramatic layouts with photo-realistic images. But it's the emotional expressions and contemplative nuances of the characters' faces that tell the story as you would expect from such a upside-down upheaval of lives. Staggs and writer Gail Simone have found a symbiotic relationship that invests their talents into one singular vision and it rocks.

'Crosswind' is a page-turner with nary an escape route in sight. Cason and Juniper are knees deep in their situations with one deadly twist that could jeopardize them ever going back to their original bodies. However, are they getting too comfortable in their new worlds? Cason has adapted well to his will Juniper summon her inner tough guy when needed? Stay tuned, readers.