END OF STORY ARC! "DEEP IN THE HEART" reaches its blood-drenched finale! All the death and destruction the Bowmans have caused finally leads the authorities to their little farm. Surrounded by cops with no way out, is this the end for the Bowman clan? Surely, Granpa will have something to say on the matter... 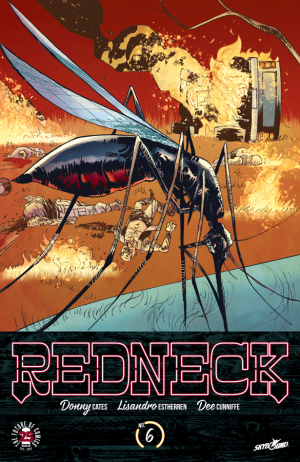 The above synopsis says it all as Donny Cates, Lisandro Estherren, and Dee Cunniffe close out the first arc of 'Redneck' in epic fashion. This exceptional southern-fried vampire tale is unlike anything you've read and is really more about family and legacy than your usual blood-sucking shenanigans. The Bowmans' once idyllic situation in Texas has been upended putting them at odds with a rival family leading to a mysterious murder, and mistrust even among themselves. It's one dysfunctional family that faces its past while dealing with an uncertain future.

Slappy's killer was revealed in the last issue and J.V. has had enough. That murder set off a domino-effect of disastrous confrontations, digging up old wounds, exposing some family history, and turned the town into a battleground. The fact that the sinister source of the conflict rests so close to home infuriates J.V. and it becomes time to give someone a butt whoopin.' This issue justifiably covers that in glorious fashion while the law is literally right outside their door. It's a fast-paced, wall-to-wall brawl that essentially changes the lives of the Bowmans forever.

Lisandro Estherren and Dee Cunniffe are completely unleashed in this arc finale. Estherren creates a dynamic tour de force of violence and anger that crashes from one panel to the next. His gritty style lends itself to the down and dirty aspect of a fight five issues in the making. Cunniffe uses gradients of two colors - yellow and blue. Often dingy and glowing, the yellows illuminate the combat like a lingering smoldering fire left to die in embers. The blues represent a cooling and calming effect that tones down the conflict and take a very different direction. It's one of the most exciting issues you'll see this week.

'Redneck' is one of those titles that you want to collect and buy trade paperbacks to gift to friends. It's that good. This exciting and significant arc finale is the payoff fans have been waiting for but didn't expect. Once again, Donny Cates has delivered another great series that surpasses expectations and satisfies your nerdy soul.