The Orville crew comes to the aid of a stranded mining vessel stuck in the orbit of a star. They save the captain of the ship, Pria (guest star Charlize Theron), and soon Ed Mercer (Seth McFarlane) is making "googly-eyes" at her to the chagrin of a very suspicious first officer Kelly Grayson (Adrianne Palicki). 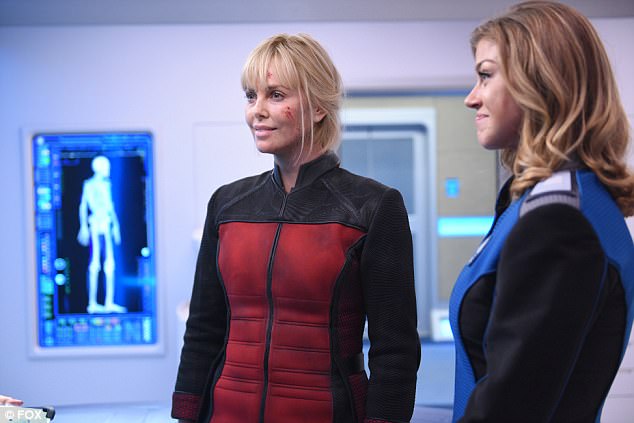 It's only right that a show that borrows so much from Star Trek would have Star Trek: The Next Generation’s Jonathan Frakes direct this episode. He does a stellar job as the episode named "Pria" takes the audience to new areas of the ship, an impressive FX-heavy dark matter field, and an amusing subplot involving Helmsman Gordon Malloy (Scott Grimes) teaching Issac (Mark Jackson) the how practical jokes work. The mysterious stranger turned love interest with ulterior motives proving a suspicious (and possibly jealous) ex correct makes this story predictable but it's still massively fun with Oscar-winner Theron shaking things up on board.

Theron’s Pria is a convincing "victim" who endears herself to Ed and most of the crew except for Kelly. Her unease with how much Pria has influenced the crew leads her to enlist Security Chief Alara to inspect Pria’s room. Kelly trying to convince Alara to bend the rules to enter her room is really a funny scene that shows Adrianne Palicki's comedic chops. Palicki is the glue that keeps 'The Orville' together. Seth McFarlane has great affection for Star Trek obviously, he created this show, produces it and writes for it but as a leading man, he's not on Palicki's acting level. He's getting better but his comedic timing is still a work in progress.

Alara and Kelly find some possibly incriminating evidence only to have Ed dismiss it and scold Kelly for invading Pria's privacy. Of course, the truth reveals itself putting everyone in danger in a twist that breaks the familiarity of the story. The subplot involving Malloy and Isaac concerning the nature of pranks also takes a turn, a darkly comedic twist. The show tries to balance the earnestness of its dramatic narrative with moments of funny asides and subversive jokes. They don't always land but they've started to feel more natural than during the pilot.

The high production values and winning music by John Debney elevate the show but more thoughtful scripts like the last episode,"If the Stars Should Appear" is what it needs more of. While having Theron guest star is a treat, 'The Orville' shouldn't become gimmick TV and McFarlane should trust his skills to deliver a funny and impactful story. Theron's performance begins to wane near the end when she's not allowed to turn up the villainy. Her range is limitless but it felt like she was reined in a little too much.

'The Orville' is still finding its way. There's an ebb and flow from one episode to another that creates a sometimes awkward rhythm in tone and execution. There's no doubting McFarlane's passion for sci-fi and comedy as he tries to juggle them both here. The show is going through first season growing pains but the highs make up for the lows.