During the Martin Luther King, Jr. holiday weekend, Warner Bros. Television Group, DC Entertainment, and Warner Bros. Home Entertainment will team up for “DC in D.C.,” a landmark pop culture event that brings together the worlds of entertainment and public service to illuminate the story of America and current issues through the lens of comics and Super Heroes. 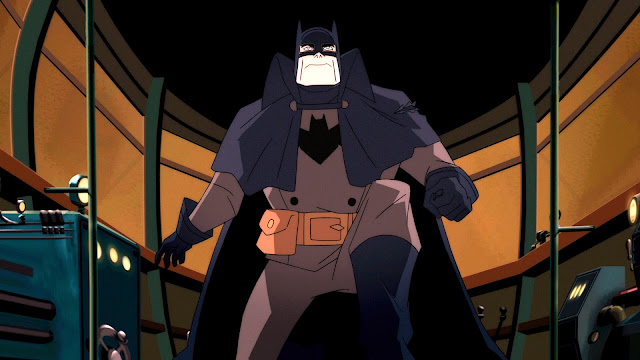 Warner Bros. Animation and DC Entertainment provide a new take on Batman as a steampunk Dark Knight hunts Jack the Ripper through the shadows of the turn of the century Gotham City in this all-new animated feature available from Warner Bros. Home Entertainment January 23, 2018, on Digital and February 6, 2018, on Blu-ray and DVD. The premiere event is for mature audiences 18 years of age or older, will kick off with a cocktail reception and will be followed by a Q&A session with the film’s voice cast and producers.  (Newseum Theatre)


Inspired by the landmark one-shot Elseworlds tale by Brian Augustyn and Mike Mignola, Batman: Gotham By Gaslight takes place at the turn of the century as America’s continued industrial revolution is to be showcased at a World’s Fair hosted by Gotham City. But while the world prepares to witness the glittery glory of Gotham’s technological advances, there is a killer loose in the city’s darkest shadows. Preying on the city’s women, this killer is as precise as he is cruel. As Police Commissioner James Gordon (Scott Patterson – Gilmore Girls) tries to calm the fears of Gotham’s citizens regarding the butcher called Jack the Ripper, the masked vigilante Batman (Bruce Greenwood – American Crime Story) indulges in his own detective work — with the help of confident, capable Selina Kyle (Jennifer Carpenter – Dexter) — to stop the Ripper’s murderous spree. Witness a world in flames as the notorious serial killer’s controlled savagery meets the calculated stealth of the Dark Knight. Sam Register, Bruce Timm (Batman: The Killing Joke), Benjamin Melniker and Michael Uslan are executive producers.

Events will take place Friday, January 12, and Saturday, January 13, 2018, at the Newseum, and will culminate with the world premiere screening of the upcoming DC series Black Lightning — based on the first African-American DC Super Hero to have his own stand-alone comic title — in the Warner Bros. Theater at the Smithsonian’s National Museum of American History, with a party to follow at the National Museum of African American History and Culture‬‬‬‬.

Check out a portion of the official release below: “DC in D.C.” brings together stars and producers from Warner Bros. Television’s DCTV series, as well as comic book writers and artists from DC Entertainment, who will join invited guests from politics, government service, entertainment, business, academia and more. The event will explore the intersection of comic books, culture, entertainment and enlightenment through a series of panel discussions open to the public. Additionally, “DC in D.C.” will present the premiere screening of the DC Universe animated movie Batman: Gotham By Gaslight (for ages 18+) at the Newseum.

• And more to be announced…

Highlights of the “DC in D.C.” event schedule include:

• Stars and producers from WBTV’s DC series Arrow, Black Lightning, DC’s Legends of Tomorrow, The Flash, Gotham, Supergirl and Freedom Fighters: The Ray join comic book authors and artists from DC Entertainment for panel discussions and appearances that are open to the general public. Additional information about tickets for the five public panels will be released at www.DCinDC2018.com.

• Public sneak peek screening of Black Lightning, as well as the premiere screening of DC Universe animated movie Batman: Gotham By Gaslight, coming to Digital on January 23, 2018, and Blu-ray™/DVD on February 6, 2018, from Warner Bros. Home Entertainment.

• For additional info on “DC in D.C.,” please visit www.DCinDC2018.com, and follow us on Twitter at @warnerbrostv and @DCComics, hashtag: #DCinDC