REVIEW: 'No. 1 With A Bullet' #2 by Jacob Semahn, Jorge Corona, and Jen Hickman

'No.1 With A Bullet' #2 picks up where the first issue left off. The aftermath of the leaked sex tape belonging to TV personality Nash Huang is examined in excruciating detail. This might be a triggering read for anyone who's been cyberbullied or shamed. 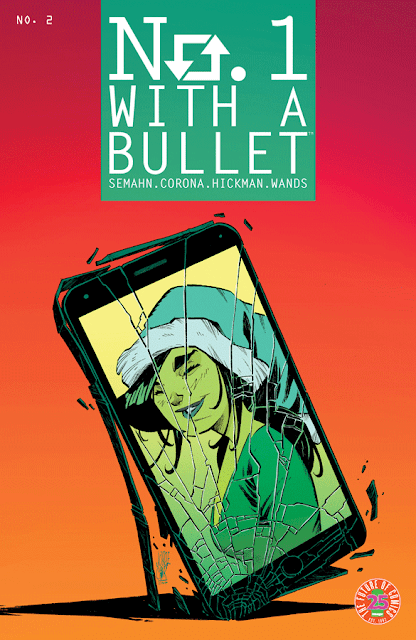 Jacob Semahn and Jorge Corona take the reader down a gauntlet of shame, of anger, of sorrow, of immeasurable pain as we witness the unraveling of Nash as she withstands a torrent of gossip, insults, and accusations. This is where science fiction meets non-fiction because the high tech contact lenses that were used in recording Nash's intimate moment and eventually leaked resulted in the far too familiar campaign of online abuse and endless public shaming that happens now. Semahn delivers an unflinching and prolonged look at the devasting affects this intrusion of privacy causes.

This is often uncomfortable to read and it should be. The snide comments and strange looks from strangers, the media backlash, the humiliating meeting about the non-disclosure agreement, and the inevitable reading of online comments too powerful to ignore. Nash comes full circle, taking the hits, exposing her vulnerabilities, crying, falling into depression only emerge on the other side angry and resilient. It would all be too dour, too dark and sad if not for the captivating art by Jorge Corona and Jen Hickman.

Corona's unique character designs help create a sort of fever dream of strangers with disapproving looks, gossip show hosts that look menacing, and a chilling demonstration of online comments.
Hickman conveys a somber tone with pastel colors before giving way to bolder deeper hues as Nash begins to bounce back. The art and script come together in perfect harmony creating an otherworldly future but the themes are all too real and present.

'No. 1 With A Bullet' is a tale ripped from today's headlines told with worts and all. It's a sobering look at the impact it does to someone's life as embodied by Semahn's heroine. As painful and as uncomfortable as the topic of online abuse and public shaming is, Semahn and Corona don't pull any punches while creating an engrossing and mesmerizing story. And it's just getting started.