'Redlands' returns this month with another terrifying chapter that reaches new levels of horror rooted in the words of a child. 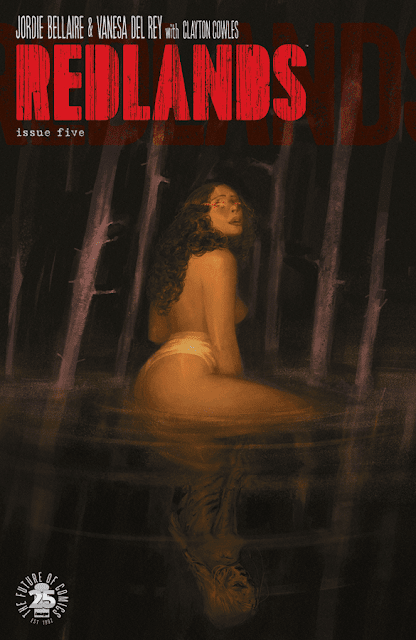 Jordie Bellaire plays by her own rules. 'Redlands' doesn't follow a strict narrative. Instead, the storytelling is very fluid where anything can happen to anyone at any time and best of all - it's all intoxicating. The most important issue you're reading is whichever one is currently in your hands. I'm sure there's an arc in there somewhere but so far each issue is great on its own terms.

The pieces to a larger picture begin to take shape through Bridget's story. When we last saw her she was showing Casper the dead body of a missing woman named Nancy Montgomery. She had been searching through the police archives looking through missing person reports. She seemed rather obsessed with finding her last known whereabouts. Casper seemed curious enough to help her and drive out to Laurent's place but they stopped along the way where Bridget would lead him to Nancy's body. The reason why is explored here and the way Bellaire constructs the history of Nancy is ultimately devastating.

The award-winning colorist is also a fearless writer. 'Redlands' has been at times a little confusing because there seems to be a disconnect from one issue to the next. With new characters being introduced and a slow-to-develop-plot, the comic can feel like an anthology instead of a serial. However, Bellaire has an ear for dialogue and finds a way to make any scene totally captivating regardless of what's going on outside of that moment. Whether it's a "mother" reading a totally inappropriate novel to a child as a bedtime story or a never-before-seen character impersonate a young woman to garner the trust of a rapey trucker, Bellaire has a deliberate style that gives weight to any scene. This is something that evades most writers and she's done it consistently in this series.

Vanesa Del Rey's scratchy drawings are the perfect vessel to see Bellaire's Floridian gothic tale. The art invokes an eerie menace that supports the script with naked vulnerability (in the literal sense as well) and matter-of-fact violence and gore. The character designs feel derived from the real world, all shapes, and colors, sharing this space where witches reign but a new force is about to shake things up. This is the stuff of nightmares but probably none more frightening than Nancy's journal entries that close out the issue.

'Redlands' is the type of terrifying comic that operates on its own terms, immersing the reader in fiendish situations as it sees fit. Bellaire and Del Rey have conjured up a cauldron of black magic, sex, and violence. However, it's the description of a child's sexual exploitation that will make your skin crawl as the all-too-real narrative invades the story. 'Redlands' is unflinching, unnerving, and completely unpredictable. It shakes one's previously held beliefs or assumptions about witches, horror, and comics.