Don't miss out on upcoming comics from AfterShock Comics. Check out April's solicitations and make sure to notify your local comic shop which ones you want in your pull box. 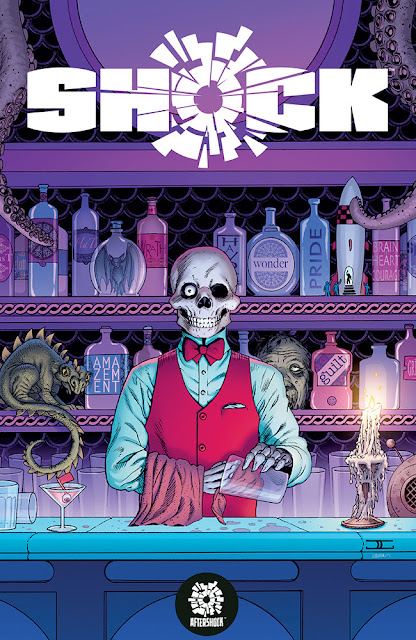 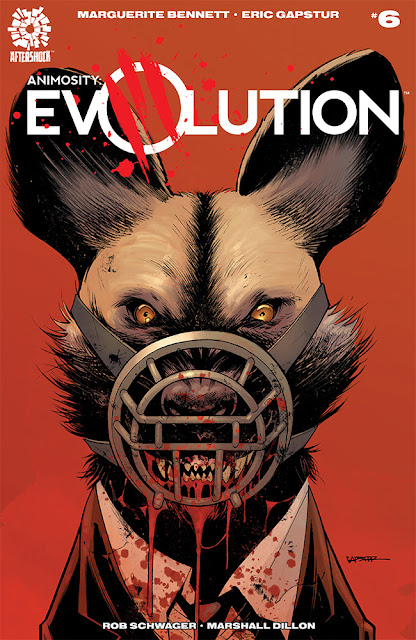 Conspiracies tighten around Adam and his companions as a bloody interspecies gang war explodes in the City by the Sea.

From the brilliant mind of creator/writer Marguerite Bennett (INSEXTS, Bombshells and Batwoman) with artwork by SHIPWRECK’s Eric Gapstur—ANIMOSITY: EVOLUTION is an exciting new series that expands upon this already amazing world!

“AfterShock has earned their reputation for putting out some of the most diverse and entertaining comics in the industry. Animosity is a prime example of this.” - Steve Gustafson of 411mania.com


Having a baby when you're sixteen can be tough. For Sadie...it'll be HELL! 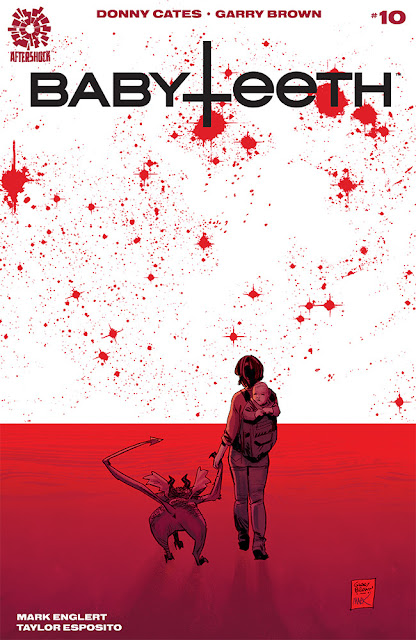 The end of our first year finally brings us to Palestine, and it is there that we unleash our biggest reveal in the series so far. It’s all been leading to this, folks. And after this issue, nothing will ever be the same again!

From Donny Cates, the writer of Thanos, Dr. Strange, Buzzkill, Paybacks, Redneck and the breakout hit God Country, comes a pulse-pounding new series with art from THE REVISIONIST’s Garry Brown!


There's a world of magic and madness just behind our own... 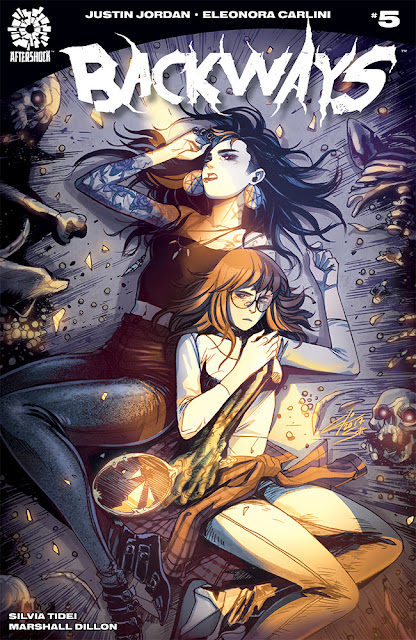 Anna has found the way to rescue Sylvia from the Outsider, but the denizens of the Backways are determined to stop her. And if Anna succeeds she may put the Backways and the world in grave danger.

From Justin Jordan (STRAYER, Green Lantern: New Guardians) and Eleonora Carlini (Batgirl, Doctor Who) comes the brand new series of magic, mystery and mayhem that is sure to appeal to fans of Harry Potter and The Chronicles of Narnia!

“Horror and dark fantasy comics are thriving right now thanks to series like Wytches and Harrow County, and Backways sounds like it'll fit right in.” -Matthew Jackson of SyFy.com


What happens when the fate of the world rests on the shoulders of teen heartache? 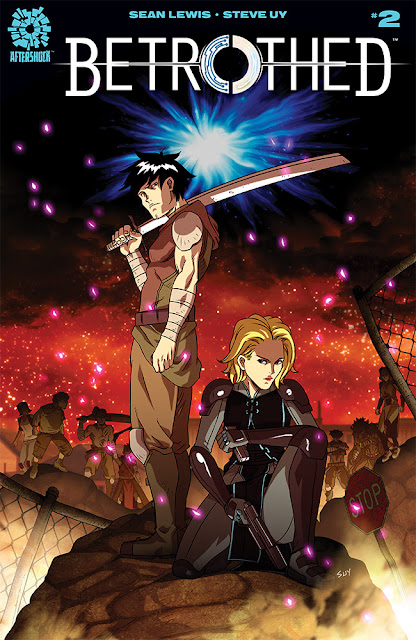 Your favorite teen space opera continues as Tamara and Kieron find themselves in the battlefields of Priam with their targets aimed at each other. As their friends Fat Andy and Annaleigh become aware of the secrets their friends are hiding, new dangers are brought to life in the war between the Priam Tribes and the Nuam futurists.

From writer Sean Lewis (The Few) and artist Steve Uy (Uncanny X-Men, Avengers Initiative, Grumpy Cat)  comes a sci-fi series, with a fun mix of Archie and Saga, that HAD to be told at AfterShock!


The inspiration of Dracula...is the story of nightmares. 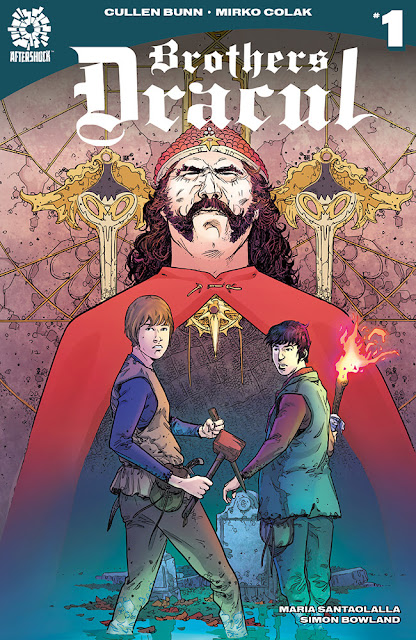 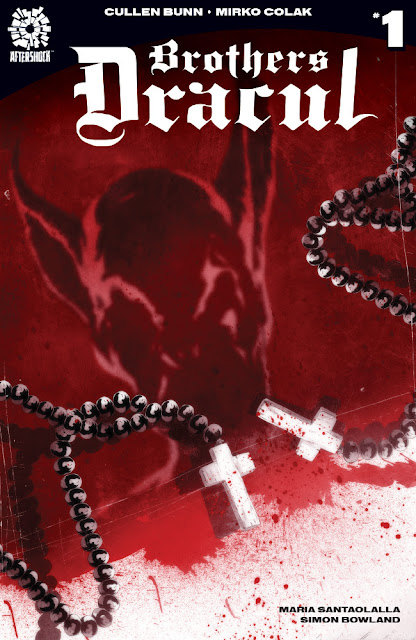 The legend of Vlad the Impaler is the stuff of nightmares. The inspiration for the most iconic of monsters—Dracula—Vlad tortured and murdered thousands of victims. But what turned him into such a depraved killer? The truth lies in his teenage years, when Vlad and his brother Radu were held hostage by the Ottoman Empire. During this time, the brothers learned many things—archery, riding, the art of combat, matters of court...and how to stalk and slay vampires.


Welcome to the future. Get ready to die. 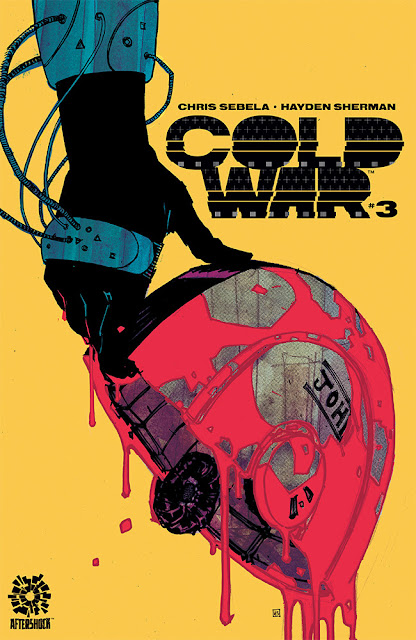 Hunkered down and waiting for death, the Cryonauts’ war will turn from the strange enemy lurking beyond their safe zone towards each other. As they struggle for control and try to dig up answers, family man John and the elusive LQ’s lives from the past will unfold in this nightmare future, starting everyone down a path towards the ones behind the bloody curtain.

From Chris Sebela, writer of Blue Beetle, Kiss/Vampirella and Evolution, and Hayden Sherman, artist of The Few and John Carter The End, comes the story that HAD to be told at AfterShock!

“Sebela managed to balance a number of genres, giving us a plate that offers something for just about everyone…Hayden Sherman’s art is a big plus and evokes early Frank Miller. 9 out of 10.” -Stephen Gustafson of 411mania.com


What mom wouldn't march through the inferno to save her family? 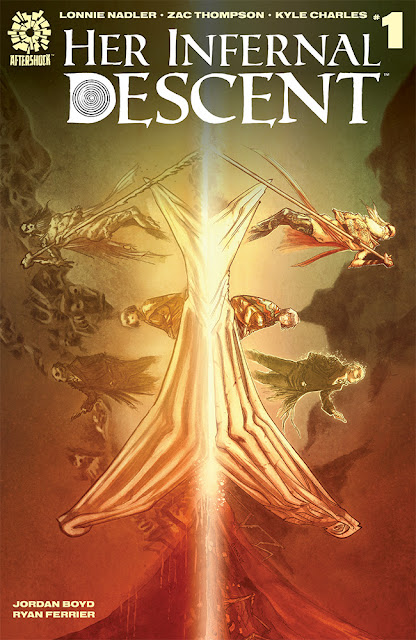 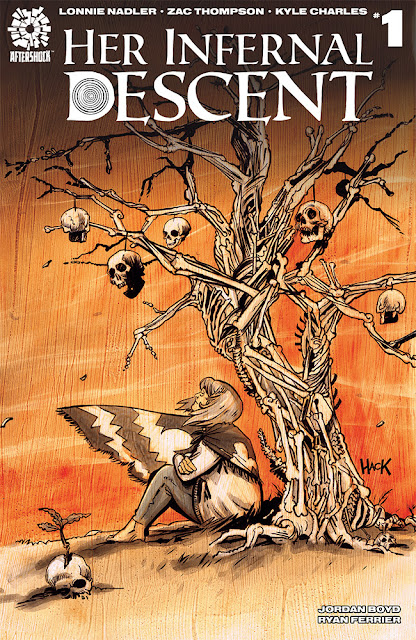 A tale of loss told in five parts. Any good mom would march through the inferno of HELL to get her family back.

Unable to cope with the burden of grief, a middle-aged mom descends the nine circles of hell to retrieve her forsaken family. Guided by the ghosts of William Blake and Agatha Christie, this no-nonsense mother journeys deep into a bizarre underworld filled with celebrity sinners, surreal landscapes, and absurd tasks. Her Infernal Descent is a retelling of Dante’s Inferno that updates the themes for a modern audience.

From the writers of the break-out hit The Dregs, and the artist of Roche Limit, this is HELL like you’ve never seen before.


They're out to Get Daddy...and they're about to find out he's the biggest bastard of them all! 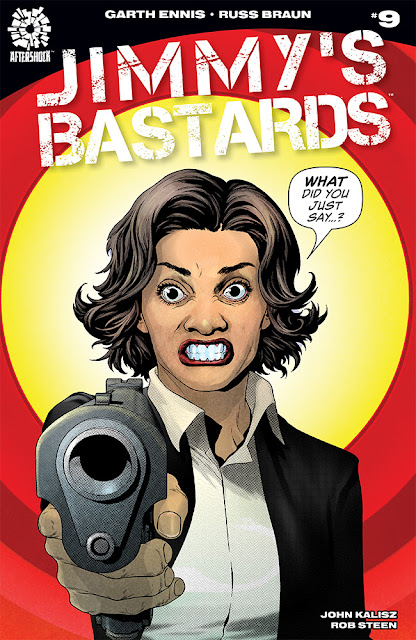 The final battle between Jimmy and his offspring goes all the way to the edge of sanity and beyond. Even if our heroes get out alive, can normality ever really be restored? And is there more to Jimmy Regent’s legacy than the man himself suspects?

From the creator and writer of Preacher and The Boys comes the series that HAD to be told at AfterShock!

“JIMMY’S BASTARDS…is a crazy, offensive, beautiful debut to what is sure to be another Garth Ennis winner!” - Lucas Wagner of thatsnotcurrent.com


A girl and her robot set out to save Leonardo da Vinci from the world... or the world from da Vinci! 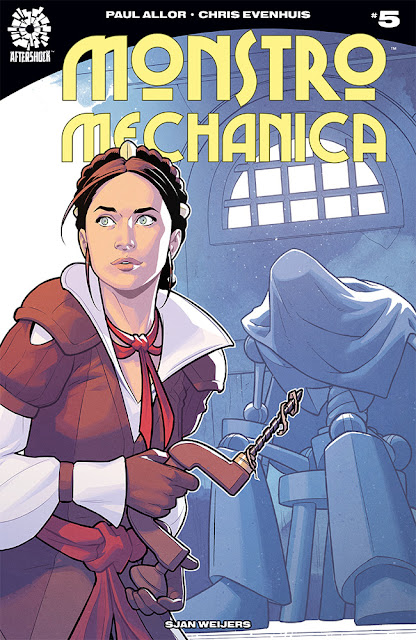 Leonardo and Isabel return to Florence to take on new roles and new responsibilities. As Leonardo faces renewed pressure from both Florence and Rome, Isabel realizes that something needs to change—and fast!

But before all that: Girls' night out!

From creators Paul Allor (Teenage Mutant Ninja Turtles) and Chris Evenhuis (Wynonna Earp) comes this swashbuckling adventure story about war, identity and the birth of the modern world that HAD to be told at AfterShock!

“MONSTRO MECHANICA is a swashbuckling adventure story, filled with humor, pathos and giant wooden robots, that has something to say about humanity and society. It’s also incredibly fun, and filled with absolutely gorgeous art. You’re going to love it!” - Paul Allor.


The legends you think you know, were the heroes you never imagined. 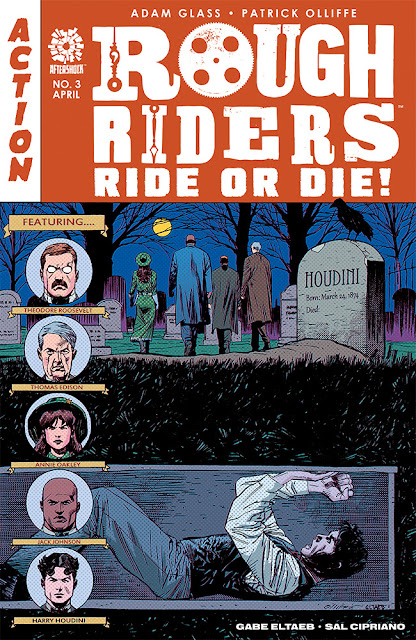 In “Under the Pyramids”, Harry Houdini walks on through to the other side and discovers that the Rough Riders are up against the legendary Dutch "Bokkenrijders" who have returned to this earthly plane to settle a score with one of his teammates! But Harry's truest challenge may be a visitor from his past who can spell his end...unless he listens to his newest teammate H.P. Lovecraft!

Created and written by Adam Glass (executive producer of Supernatural and writer of Suicide Squad) with artwork by Patrick Olliffe (Untold Tales of Spider-Man).

“The story is exciting and fun, with the characters being faithful and fanciful, and the visuals are epic and thrilling. This is what comic books are all about!” – Patrick Hayes of scifipulse.net 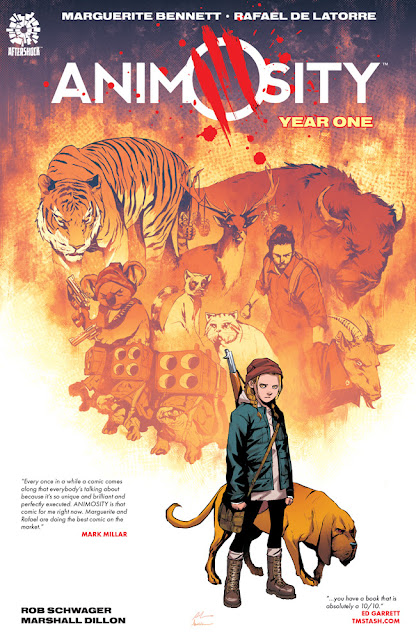 The world is plunged into chaos as the newly-intelligent Animals fight humanity, and simply fight each other, for their own life, liberty, and pursuit of happiness. In the midst of the turmoil is Jesse, an 11-year-old girl, and her dog, Sandor, who is devoted to her and her protection. One year after the incident, Jesse and Sandor begin a cross-country journey to find Jesse’s half-brother, Adam, who is living in San Francisco.

Don’t miss out on this fantastic collection of the series everyone has been talking about since its’ debut! 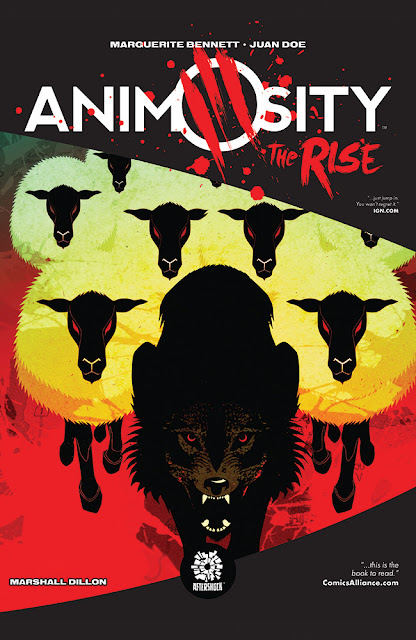 "The Animals thought, spoke, and took revenge. The dust has settled and the blood dried, but a new force is rising in the West, ready to help Animal-kind seize power in the dark new world to come…”

A city by the sea rises, ruled by animals who become more human and humans who become more animal. All the while, Adam, an imprisoned veterinarian, works on the technology that would give his captors the strength to change the world...

This hardcover edition, printed in oversized format, collects all three issues of this spin-off from the fan-favorite Animosity series.


Noah's Ark was but the first. 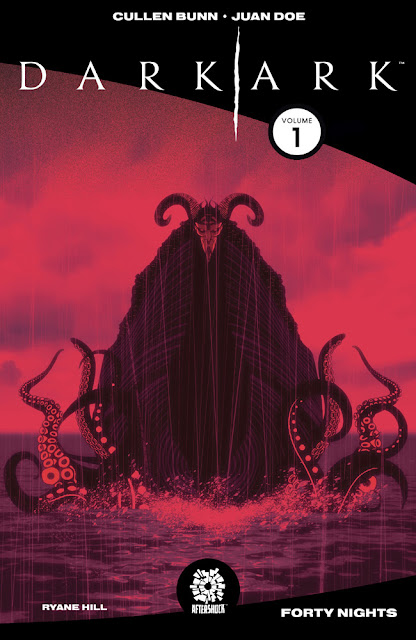 Collecting the first five issue of this hit AfterShock series!

The wickedness of mankind has moved the Creator to destroy the world by way of the flood. Noah has been tasked with building an ark to save his family and the animals of the world. But this is not Noah's story. For darker powers have commanded the sorcerer Shrae to build his own ark and save the unnatural creatures of the world—such as the vampires, the dragons, the naga and the manticore. But what will happen on a vessel crawling with monsters, where insidious intrigue and horrific violence are the rule of law? 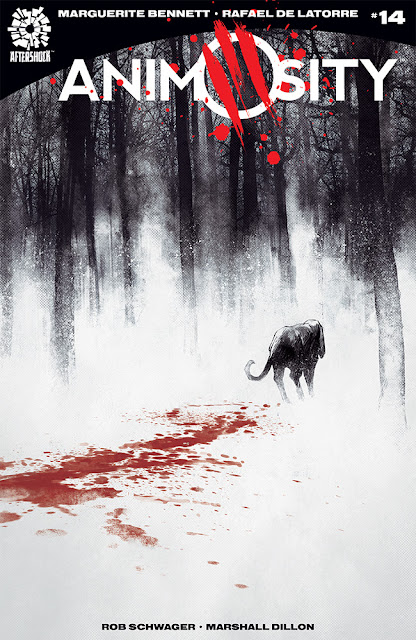 Betrayal! Jesse is kidnapped by a traitor she trusted and loved. Sandor follows the bloody trail to the dreaded Walled City, where the remains of human civilization reign in terrible power—and attempt to rebuild the world for humans only.

“Animosity looks to be AfterShock’s first true classic, the book that’ll put them on the map.” – Tara Giovannini of IGN.com