Adventures starring kids have always been a wonderful storytelling device and one that never gets old. In fact, it's become popular again as evidenced by the success of 'Stranger Things' on TV, 'It' at the movies, and 'Paper Girls' and '4 Kids Walk Into a Bank' in comics. Eliot Rahal has conjured up his own twisted tale of teen thrills turned adult turmoil. A secret fifteen years in the making has resulted in a murder mystery of one of their own. 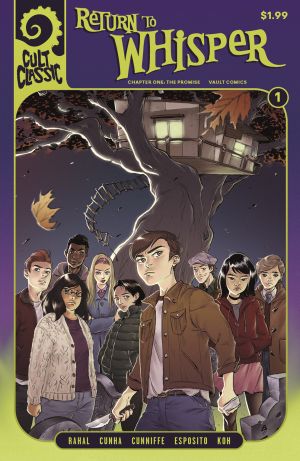 The Grave Robbers Society used to get together to watch cheesy horror films on the "Cult Classic" show where a host would present the films and interview people of interest. The diverse group of nine teens shared a love of gory slasher flicks and a camaraderie that worked despite their different personalities. When Wyatt's dad goes on the show to discuss some rare artifacts including the journal of a famous colonel that reportedly discloses clues to a small fortune the teens decide to find the treasure and reunite fifteen years later to unearth it and divide it amongst themselves. Unfortunately, their planned reunion takes on a somber turn when they must bury one of their friends.

Rahal creates the perfect set-up that begins as many of these of these stories do with the group of kids getting together, demonstrating the team dynamics (there's always one asshole), and laying down the groundwork for the plot. It's well paced and dramatic with just enough gore and twists to make 'Cult Classic' a cut above the rest. Rahal makes its impossible to not get hooked right away. When they reunite fifteen years later a lot has changed including the team dynamics. The story alternates between present day and the past and in both instances you want to know more about each. You get a taste for who they are but there are clearly more to learn and you don't want the story to end. Damn you, Rahal!

Felipe Cunha has sort of an unrefined style that works with great pacing and transitions. Cunha captures the angst of the characters both as kids and adults. Things turn more nefarious and serious as adults and the art speaks volumes through body language and facial expressions. Dee Cunniffe always provides the right tone in colors especially to differentiate the two time periods. You get the feeling you've discovered an underground comic like you used to when you were a kid. The kind of comic you'd fold, stick in your back pocket, and want to share with a friend.

'Cult Classic: Return to Whisper' takes a page out of Stephen King's repertoire and reimagines his own group of teens turned adults. They're bound by a secret and a promise that could shatter their friendship. Throw in a mysterious death and Rahal has created an irresistible comic.