REVIEW: 'No. 1 With A Bullet' #4 by Jacob Semahn, Jorge Corona, and Jen Hickman

As Jad Davies comes to terms with his role in recording his intimate encounter with his assistant, Nash continues to reel from the public humiliation resulting in hallucinations possibly brought on by anxiety and stress. 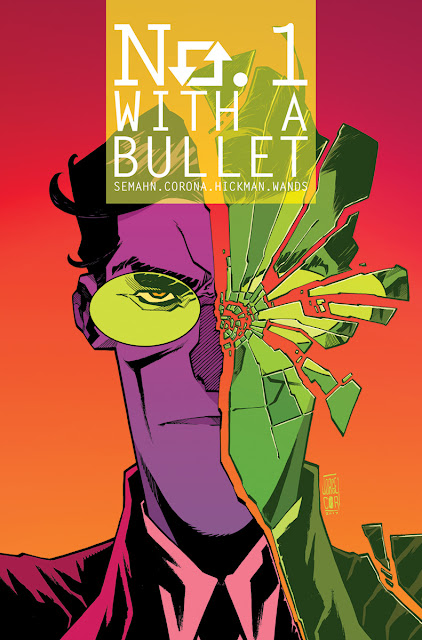 I wasn't sure before if Jad was sincerely remorseful of his encounter with Nash and the subsequent release of a sex tape hacked from his iris shutter contacts. Right off the bat, Jad recites his apology in front of his agent and his boss. It's contrite and genuine but they're only aghast at the thought of liability Jad's honesty could open them up to. Still, Jad is resolute to clear the air even if his estranged wife would prefer he focus on their son than on his public image. It's a messy situation that has tarnished Jad's career but it's nothing compared to what Nash has been going through.

As if the slut-shaming from the internet and the media wasn't bad enough, or the condescending looks from strangers on the street weren't bad enough, Nash sits curbside handcuffed next to Rigo after a violent episode inside the museum from the last issue. She's become a sideshow act and those driving in rush hour traffic slowing down to take her photo is just the latest demeaning occurrence. Luckily, Detective Grover comes to free her and take her and Rigo home. He cryptically asks about Violet Reynolds but that's not followed up. Rigo does his best to calm Nash's nerves and that's it's just stress that's messing with her mind.

Nash has been through so much in only four issues, it's a testament to Jacob Semahn's writing that what happened to her isn't simply brushed aside or minimized. In fact, Semahn highlights the inequity of consequences for Nash and Jad. She is dragged through the mud while Jad is encouraged to avoid responsibility altogether. Thankfully, Jad wants to apology but even that won't change the trauma Nash has endured and continues to endure. Now, these hallucinations whatever the cause are haunting her and making a chance to move on impossible. And that's the point, as a victim whose most intimate moments were exploited there's a lingering effect that's painful and depressing. Semahn isn't afraid to show what Nash is battling while the world mocks her.

As usual, Jorge Corona does some of his best work illustrating the pain, confusion, and sadness in Nash. His unconventional style, adds to the disorienting condition of Nash's reality while also laying out impactful panels of Jad's come to Jesus moments. Jen Hickman does what colorists do best and that's highlight the mood, the tone, and attitude of what's going on. The color scheme during Jad's on-air apology as Nash looks on is absolutely brilliant.

'No. 1 With a Bullet' is an unflinching look at cyberbullying and toxic internet culture that permeates so much of our daily lives. Nash battles the lingering effects of being exploited as best she can, staying resilient amid debilitating hallucinations. All the while, there's a deadly mystery surrounding a potentially deadly stalker lurking right around the corner. This remains a devastating cautionary tale about technology enabling the monsters among us. It makes one damn vital read too.