Hit-Girl and Mano continue their reign of terror on Colombia's criminals. With a cache of stolen Russian spy gadgets and weapons, there are no limits to the imagination on how to exterminate the bad guys. 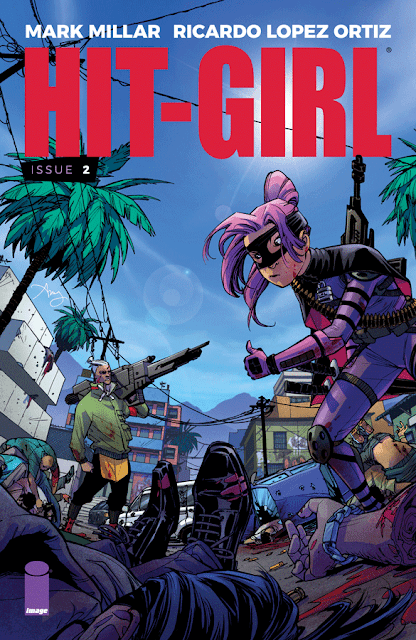 Everyone knows Mark Millar is a talented writer and has been for a long time. This is not news but I'm reminded just how much so when I look at his new comics that reside in the 'Kick-Ass' universe. His relaunched 'Kick-Ass' title starring an African-American single mom and military vet, Patience Lee, is more nuanced and thoughtful than the original but retains the ultra-violence the series is known for. The new 'Hit-Girl' series lives squarely in the world Dave Lizewski left behind when he hung up his costume. Mindy McCready is Millar's favorite psychopath and his approach to her is to let her run wild with cartoonish abandon. If you want more action and storytelling in the vein of the original Millar proves his versatility in his approach to both books and you can rest easy, 'Hit-Girl' is every bit as bat-shit crazy as you'd expect.

While Hit-Girl and Mano eviscerate his gang rivals in every way imaginable, Mano's little brother, Jorge, is being groomed to follow in his footsteps as a gang member. Part of his initiation is to have his first kill and that time is approaching. The cartel leader, El Padre, we learn is more than just a drug lord, at least to people like Mano and Jorge. He's seen as a mentor and spiritual leader, whose deadly reign seems justified for giving back to his community. It's the manipulation of national pride and benevolent rule that gives El Padre a loyal following who seek hope in a hopeless place. It's a twisted sense of logic that is all too real when an autocratic leader takes control.

Under the watchful eye of the mother of the child he killed, Mano can't run or he'll be killed remotely. In the brief discussion with her, he's oblivious as to why she'd want to kill him. It exposes a disconnect, as with Mindy, that all this killing leaves behind a lot of collateral damage. Rarely does it come back to haunt them. For Mano, this is his reckoning even if he doesn't know it yet.

Ricardo Lopez Ortiz is the right kind of artist for this wild bloody affair. His cartoony exaggerated style is perfectly suited for the crazy kill shots and exploding heads that Millar puts forth in the script. Ortiz tackles these chaotic clashes, like one where a captain's exotic animal collection are coked up and on the attack,  with a visceral and energetic design. It's a pulse-pounding sequence that is entirely captivating. There are some violent scenes that would make Skottie Young (I Hate Fairyland) exclaim, "Wow, that's excessive."I wonder how much Sunny Gho enjoys coloring blood and guts in a Mark Millar story but it certainly looks like a good time because there's plenty of it and it looks great.

'Hit-Girl' carries on the tradition of serving justice by any means necessary (or unnecessary). Mindy might just be crazier than ever as she's having a ball taking out Colombia's most notorious drug lords. Millar and company are giving classic 'Kick-Ass' fans all they can handle in a propulsive and ultra-violent carnage-fest. There's also a sly subtext to the plight of people caught up in places ruled by cartels that aren't lost on me and it's appreciated even if it is surrounded by some of the most over-the-top violence you'll ever see. Nonetheless, 'Hit-Girl' delivers big time.