If fans of the original 'Kick-Ass' series were worried this new version would go light on the violence and action they can rest assured it's every bit as bloody. Starting on page one, Patience Lee shows she means business as she takes the mantle of Kick-Ass in New Mexico. 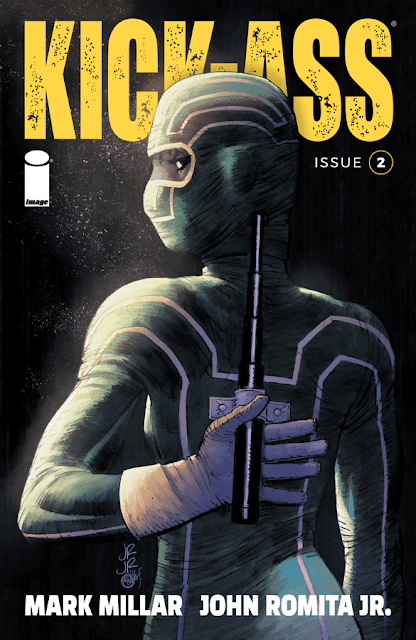 With a family to provide for as a suddenly single mother working a night job and school during the day, Patience has found a way to supplement her income - by beating the crap out of criminals and taking their ill-gotten gains. Her military training has her putting the hurt on henchman with ease and giving her a rush she so missed from her days in combat. It's also a means to an end, one that pays the bills and as a benevolent thief donates half to charity.

It's obviously a different set of circumstances from the original Kick-Ass. Dave Lizewski was a teenager enamored with superheroes and that inspired him to become a hero himself (with a ton of help from Hit-Girl). Patience's motivation is more of survival but in issue two we start seeing that the move to hero is slowly becoming a reality.

With a relatively easy score under her belt, Patience feels emboldened, empowered, and most of all suddenly flush with cash. She tries to justify this Robin Hood lifestyle by giving half to charity and planning to do this part-time. The rush is too great to resist. She begins to prepare for her next score. Mark Millar presents a much more thoughtful take on the vigilante trope, eschewing the cartoonish and meta trappings of his successful original series with a more mature and timely approach featuring an African-American military vet. And it's every bit as ultra-violent.

Providing the ass-kicking action is the venerable John Romita, Jr., back with Millar giving his signature style to the series he helped make famous the first time around. If Romita and Millar were an Olympic ice skating duo they'd win gold every time. They seem to be in sync once again, as Romita's pulse-pounding fight choreography lends energy and impact to Millar's script. In this medium, the more things change the more they stay the same as Romita and Millar deliver another bone-crushing experience with Peter Steigerwald infusing it all with vibrant colors.

The new 'Kick-Ass' keeps evolving making the transition from fierce opportunist and survivor to a full-fledged hero.  Millar and Romita Jr. still have magic together bringing another brutal chapter of the Kick-Ass saga to life in new and bloody ways. Patience is emerging as one of the best characters in comics. Get on this title now!