Comic-Con International announced the nominations for the Will Eisner Comic Industry Awards 2018. The nominees are for works published between January 1 and December 31, 2017, and were chosen by a blue-ribbon panel of judges. 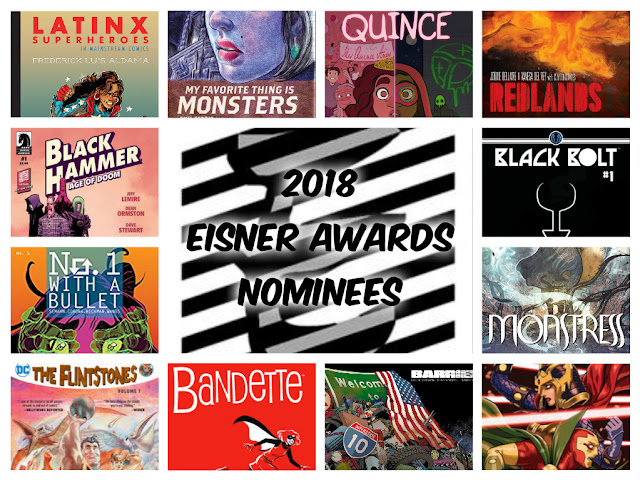 Once again, this year’s nominees in 31 categories reflect the wide range of material being published in the U.S. today in comics and graphic novel form, representing over 120 print and online titles from more than 50 publishers and produced by creators from all over the world.

The results of the voting will be announced in a gala awards ceremony on the evening of Friday, July 20 at Comic-Con in San Diego.

“Ethel Byrne,” by Cecil Castelluci and Scott Chantler, in Mine: A Celebration of Liberty and Freedom for All Benefiting Planned Parenthood (ComicMix)
“Forgotten Princess,” by Phillip Kennedy Johnson and Antonio Sandoval, in Adventure Time Comics #13 (kaboom!)
”A Life in Comics: The Graphic Adventures of Karen Green,” by Nick Sousanis, in Columbia Magazine (Summer 2017), http://magazine.columbia.edu/features/summer-2017/life-comics?page=0,0
“Small Mistakes Make Big Problems,” by Sophia Foster-Dimino, in Comics for Choice (Hazel Newlevant)
“Trans Plant,” by Megan Rose Gedris, in Enough Space for Everyone Else (Bedside Press)

Audubon: On the Wings of the World, by Fabien Grolleau and Jerémie Royer, translated by Etienne Gilfillan (Nobrow)
The Best We Could Do, by Thi Bui (Abrams ComicArts)
Calamity Jane: The Calamitous Life of Martha Jane Cannary, 1852–1903, by Christian Perrissin and Matthieu Blanchin, translated by Diana Schutz and Brandon Kander (IDW)
Lennon: The New York Years, by David Foenkinos, Corbeyran, and Horne, translated by Ivanka Hahnenberger (IDW)
Spinning, by Tillie Walden (First Second)

Best Adaptation from Another Medium

Audubon: On the Wings of the World, by Fabien Grolleau and Jerémie Royer, translated by Etienne Gilfillan (Nobrow)
Flight of the Raven, by Jean-Pierre Gibrat, translated by Diana Schutz and Brandon Kander (EuroComics/IDW)
FUN, by Paolo Bacilieri, translated by Jamie Richards (SelfMadeHero)
Ghost of Gaudi, by El Torres and Jesús Alonso Iglesias, translated by Esther Villardón Grande (Lion Forge/Magnetic)
The Ladies-in-Waiting, by Santiago García and Javier Olivares, translated by Erica Mena (Fantagraphics)
Run for It: Stories of Slaves Who Fought for the Freedom, by Marcelo D’Salete, translated by Andrea Rosenberg (Fantagraphics)

Deconstructing the Incal by Alejandro Jodorowsky and Moebius, by Jean Annestay and Christophe Quillien (Humanoids)
How Comics Work, by Dave Gibbons and Tim Pilcher (Wellfleet Press/Quarto Group)
How to Read Nancy: The Elements of Comics in Three Easy Panels, by Paul Karasik and Mark Newgarden (Fantagraphics)
Line of Beauty: The Art of Wendy Pini, by Richard Pini (Flesk)
Monograph, by Chris Ware (Rizzoli)
To Laugh That We May Not Weep: The Life and Times of Art Young, by Glenn Bray and Frank M. Young (Fantagraphics)