Welcome back to another great week in new comic book releases. Our musical slideshow is back with some of the hottest and most binge-worthy reads in comics. There's something for everybody and starting with the THANOS Annual just in time for the release of Avengers: Infinity War in theaters. Check out what else is waiting for at your local shop or online below and as always, Happy Reading! 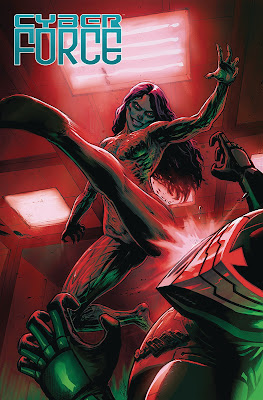 (W) Matt Hawkins, Bryan Hill (A/CA) Atilio Rojo
Stryker must reconcile with what he's become...and what's been done to his daughter Carin. There's little time for either of them, as the villain that threatens the world seeks to draft someone else to her cause: Killjoy. 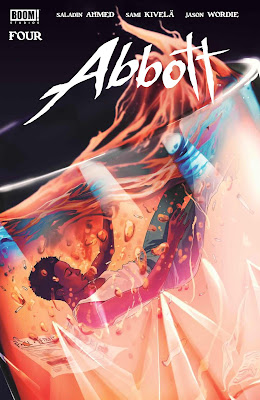 (W) Saladin Ahmed (A) Sami Kivela (CA) Taj Tenfold
Abbott has hit rock bottom-no job, no friends, and no hope against the mysterious forces that continue to plague Detroit. But that doesn't mean she's giving up. 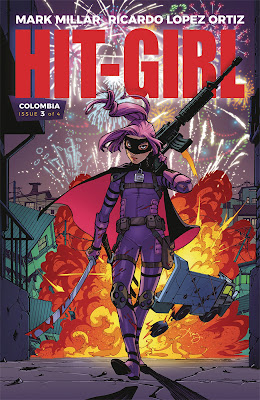 (W) Mark Millar (A) Ricardo Lopez-Ortiz (CA) Amy Reeder
HIT-GIRL IS BACK, and the body count is rising. Our violent adolescent superhero is slaughtering the city's bad guys, using a top hitman as her weapon. Yet, amid the blood, the gang fights, and assassinations, there is a grieving mother desperate for vengeance-a mother that will stop at nothing to get justice for her son. MARK MILLAR and RICARDO LOPEZ ORTIZ join forces for the third installment of Mindy's Colombian adventure. 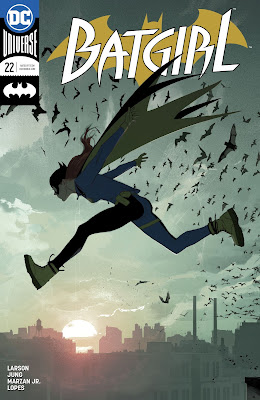 (W) Hope Larson (A) Minkyu Jung, Jos? Marzan (CA) Joshua Middleton
"STRANGE LOOP" part one! After a routine mission to save the day, Batgirl realizes she's been spending a little too much time in costume. Her life as Barbara Gordon is in a rut, and it's time to focus on changing things for the better. Can the sudden reemergence of her former love interest, Kai, be a sign of good things to come? Or is he bringing all kinds of trouble with him? Things are not what they seem in Burnside, and it's up to Batgirl to figure out why! 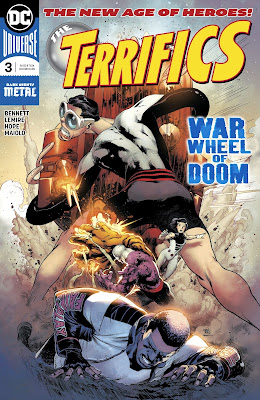 (W) Jeff Lemire (A) Joe Prado (A/CA) Ivan Reis
"MEET THE TERRIFICS" part three! When will this superhero team bound by dark multiversal magic ever get any privacy? It certainly won't be today, because while Mr. Terrific feverishly works to free himself from Metamorpho, Plastic Man and Phantom Girl-but mostly Plastic Man-the team must also contend with the towering, rolling death-inferno that is the War Wheel. 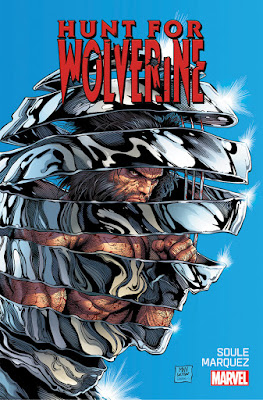 (W) Charles Soule (A) David Marquez, Paulo Siqueira (CA) Steve McNiven
The RETURN OF WOLVERINE begins here, providing the first piece of a mystery that will leave no corner of the Marvel Universe untouched. Just as the X-Men have finally come to terms with Logan's death, they learn a terrible secret. Old wounds will be re-opened, truths questioned, and an epic quest begun. The earliest clues to the mystery of Wolverine's return are laid down here... who will solve it first?
Rated T+ 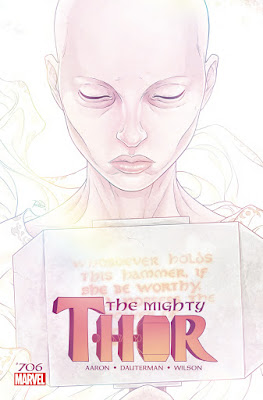 (W) Jason Aaron (A/CA) Russell Dauterman
AT THE GATES OF VALHALLA!
THE DEATH OF THE MIGHTY THOR finale
•  The battle against the Mangog is finished. And the losses have been profound.
•  So what - if anything - remains of the story of Jane Foster, Goddess of Thunder?
•  And where do the other gods possibly go from here?
Rated T+ 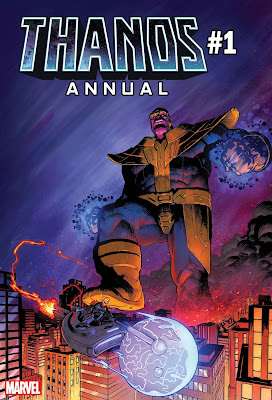 (W) Donny Cates, Kieron Gillen, Al Ewing, Ryan North, Christopher Hastings, Katie Cook (A) Katie Cook, Frazer Irving, Andre Araujo, Will Robson, Flaviano Armentaro (A/CA) Geoff Shaw
STARRING COSMIC GHOST RIDER!
Thanos is likely the most evil being in the universe...and if anyone would know, it's the all-new Cosmic Ghost Rider. Let the spirit of vengeance be your guide on a tour through the worst of the worst, as he reveals the most heinous deeds ever perpetrated by the Mad Titan...or by anyone else!
Parental Advisory 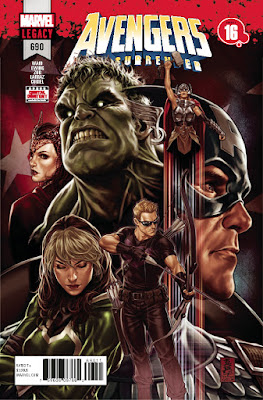 (W) Mark Waid, Al Ewing, Jim Zub (A) Pepe Larraz (CA) Mark Brooks
THE AVENGERS WEEKLY EPIC CONCLUDES!
"NO SURRENDER" REACHES ITS FINALE!
The battle is over, and those left standing in the rubble have to find a way to move forward. As an era of the Avengers comes to a close, what will rise to take its place?
Rated T+ 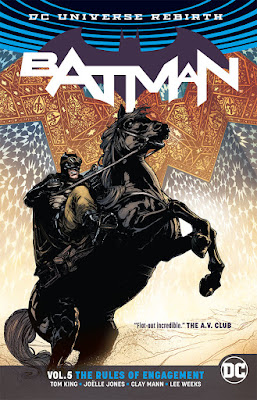 (W) Tom King (A) Clay Mann, Lee Weeks, Michael Lark (A/CA) Jo?lle Jones
Following Catwoman's answer to his marriage proposal, Batman leaves Gotham City on a quest of renewal and redemption in the desert. As he travels and fights, he encounters members of his family-each disturbed by Batman's journey, each ready to stand in his way and push back against his stubborn determination to evolve into something better than a superhero. Has the Caped Crusader passed the point of no return? He's going to need a little help from his friends, but this help comes with a downside: Batman's true intentions will be exposed. Collects BATMAN #33-37 and BATMAN ANNUAL #2. 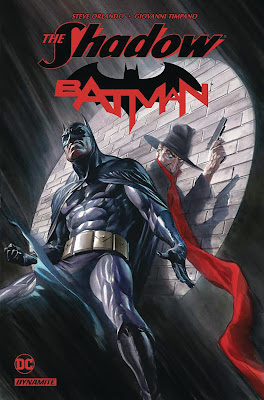 (W) Steve Orlando (A) Giovanni Timpano (CA) Alex Ross
The World's Greatest Mystery. The World's Greatest Detective. They can barely stand each other, so how will they possibly deal with the World's Greatest Evil? What legacy can two of the world's most enduring icons of justice leave once they discover an ancient evil has been living inside the world they protect for centuries. Can Batman and the Shadow save the world without destroying it in the process? Writer Steve Orlando (Batman/The Shadow, Justice League of America) and artist by Giovanni Timpano (The Shadow, Transformers) unite to tell an instantly classic tale of noir, mortality and generational heroes and villains. 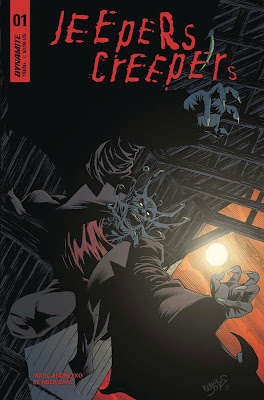 (W) Marc Andrekyo (A) Kewber Baal (CA) Kelley Jones
Grad student Devin Toulson is writing his dream thesis on Myths in American History, but when his research takes him on a journey reaching back centuries, Devin finds something horrifying. Something that crosses cultures, locations, and eras. Something that returns for a bloody feeding every 23 years. Will this young man's investigation uncover simply an urban legend or will he come face to face with an immortal monster that has terrorized humanity from the shadows since man first walked the country? 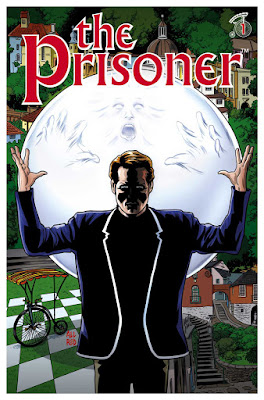 (W) Peter Milligan (A) Colin Lorimer (CA) Michael Allred
The cult TV series comes to life in a brand new comic series by writer Peter Milligan and artist Colin Lorimer! Timed to coincide with the 50th anniversary of the first US transmission, this new series transports readers back to the mysterious village where everyone is a number! 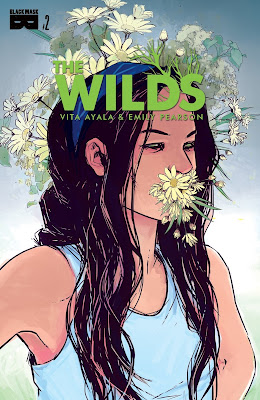 (W) Vita Ayala (A) Emily Pearson (CA) Natasha Alterici
Something frightening is happening in the outside world - Abominations are acting strangely, dragging victims away instead of killing them, amassing into hordes and working together as if they have a purpose. Inside The Compound, tensions rise as Runners lose freedoms in the wake of Teddy's disastrous return. Amid the increased threat outside the walls and the unrest within, Daisy has to say goodbye to Heather, whose latest run will take her through the worst of the dangers that the wilds have to offer. From writer Vita Ayala (Bitch Planet: Triple Feature, Wonder Woman Annual) and Emily Pearson (Cult Classic) with colors by Marissa Louise (Spell On Wheels) and covers by Phillip Sevy (Tomb Raider) and Natasha Alterici (Heathen), comes the second chapter in this bold tale of surviving in bleak times. 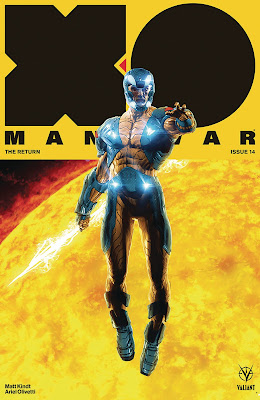 (W) Matt Kindt (A) Ariel Olivetti (CA) Kaare Andrews
A MUST-READ PRELUDE TO HARBINGER WARS 2! AT LAST - X-O MANOWAR RETURNS TO EARTH! After a brutal year spent waging war on the far side of the galaxy, Aric of Dacia must now face the one thing he yearned to leave behind: planet Earth. But as the man called X-O Manowar prepares for a world-shaking homecoming, he must come to terms with a savage awakening inside himself...and the obligations that still await him on our world. Just as the forces of HARBINGER WARS 2 - Valiant's seismic 2018 crossover event - begin to vie for Aric's loyalties, a long-awaited reunion might just shatter everything we've come to believe about the fallen warrior-king in control of the universe's most powerful weapon... The comics odyssey of a lifetime comes full circle as New York Times best-selling writer Matt Kindt (ETERNITY) and acclaimed artist Ariel Olivetti (Incredible Hulk) begin the countdown to HARBINGER WARS 2 with an inescapable turning point for the Valiant Universe's unrelenting man of war! 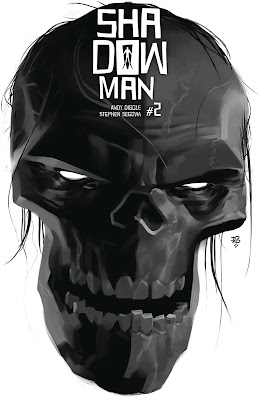 (W) Andy Diggle (A) Stephen Segovia (CA) Tonci Zonjic
Baron Samedi calls! Jack Boniface has only just returned home to New Orleans...but the Deadside won't let him stay gone! From across the veil of life and death, the malignant presence of Baron Samedi - a ravenous voodoo deity bent on consolidating power at all costs - now seeks to infiltrate the mortal plane and claim the legacy of Shadowman for himself! But even as Jack and Alyssa marshal a defense to Samedi's inhuman agenda, a monstrous new force - driven by killer instinct and a rabid hatred of the Shadowman - is about to turn the Big Easy's back alleys into a hunting ground... "FEAR OF THE DARK" stalks forward as superstar writer Andy Diggle (Green Arrow: Year One) and incendiary artist Stephen Segovia (NINJAK) bring a hard-hitting reckoning of magic and might to Valiant's must-read new series launch of 2018! 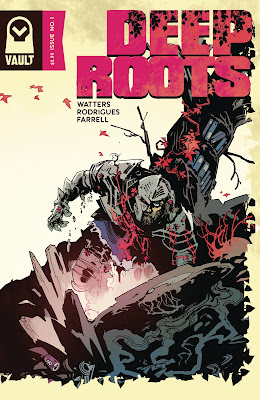 (W) Dan Watters (A) Val Rodrigues (CA) Dani Strips
Roots, once suffocating under cement, tear through the streets of London to throttle buildings. Vegetable homunculi hold up banks with automatic weapons. There is a green and blooming world beyond our own, fighting back against the human pollutant. We will launch a rescue mission to this Otherworld. But it is cruel and unknowable, and should we become tangled in its vines, more than cities will fall. From Dan Watters and Val Rodrigues comes a story of two worlds, of myth and man, of science and fiction, and the roots they share. 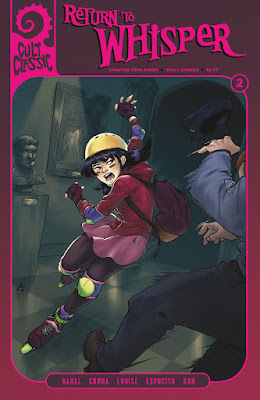 (W) Eliot Rahal (A) Felipe Cunha (CA) Irene Koh
Murder, mourning, and the heist of the century! Discover how our cast of 1997 teenage misfits stole the Diary of Colonel Vance - whose pages tell the secrets of a fabled fortune and a terrible curse! Meanwhile, in the present, another member of the grown-up gang is dead. Will the killer be able to cover their tracks before an old enemy emerges?

(W) Mark Waid, Ian Flynn (A/CA) Audrey Mok
It's the run-up to the most important event in the gang's lives-prom! Who's going with who? Who's NOT going with whom? And how will Archie end up tanking the whole night?