The latest arc finale of 'Motor Crush' is a satisfying conclusion as Domino finds redemption, reconciliation, and revelations. 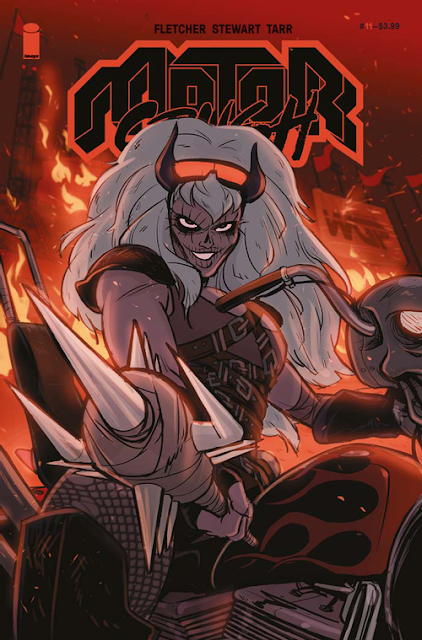 Writers Brenden Fletcher and Cameron Stewart have put Domino through hell but her personal arc comes full circle when she selflessly does everything she can to ensure Sonoya Vermillion wins her race fairly and without interruption from the vengeful Royals gang and their Queen.

Dom once had it all, the racing success both on the circuit and in underground Crush racing. She was poised to hit it big only to have her life upended when the Dark Rider gave a dose so powerful of Crush she awoke two years later. Her dad was an enforcer for the Producers, her love Lola had moved on, and the Dark Rider revealed himself to be the jerk Decimus Wexler who was training her friend Sonoya.

It's been a humbling deconstruction of Dom's life and career but she's learned of a mother-figure who's watched over her and sacrificed herself to help Dom escape with her dad the crazy battle from the last issue. She's realized that she blew it with Lola and didn't appreciate her the way should have. But she's also learned so much about herself and her family. The cliffhanger sets up for even more revelations.

This fast-paced exciting issue is all Babs Tarr. The race sequence that takes up the bulk of the story is beautifully laid out and paced with big moments like when Dom clashes with the Queen. As always her color palette is bright sometimes electric and even dark with the use of flashbacks. Tarr is a unique talent that is a storyteller in her own right with lush bubbly art.

'Motor Crush' finally redeems Dom and allow her to find some peace and love. But first, there's a race to the finish line not for her but for a friend. Dom learns to let go of her ego and think of others. This arc finale is sure to be a crowd-pleaser for fans of the series.