Downtown Honolulu is a sniper alley, and Saheer runs it better than anyone. He's a local celebrity for transporting medicine and information across a no-man's land occupied by militias and street gangs. But what people say about you is never the full story, and when the cheers die out Saheer is left with just his anxieties... and his secrets. 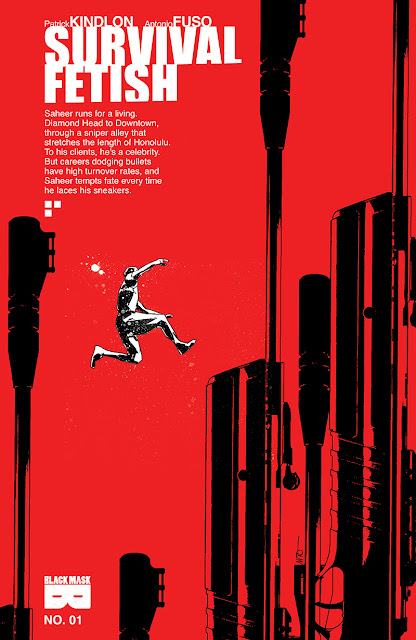 Patrick Kindlon and Antonio Fuso have come up with quite the concept. As the solicitation above explains, the streets of Honolulu belong to rivaling gangs who when they're not trying to kill each other turn their sights to innocent citizens. Bullets rain down from their perches up above in highrises looking to shoot anyone and I mean anyone on the street. It's briefly explained but there's a lot of details we still don't know. Issue one primarily sets up the world and introduces us to the protagonist Saheer.

In a world resigned to living indoors and underground to avoid the violent gangs that hover above them, Saheer is a vital part of this dystopian society.  As a runner, he's needed to get things like medicine, good, and information from one place to another all while avoiding bullets as he traverses the streets. It's gotten him a lot of notoriety since he's been able to survive thus far which is rare for runners. Meanwhile, he's just trying to be a young man with friends and a girlfriend. This underground society seems to live with some normalcy despite the situation. This is the perfect foundation for whatever comes next in the series. It offers a lot of storytelling potential.

Antonio Fuso's black and white art is fantastic. The quick pacing and perspectives of the action induce goosebumps. Watching Saheer jump from rooftops and staircases give him the appearance he's floating on air and the way Fuso uses the panels to break up the sequence is clever and efficient. Fuso mixes great detail in some panels with sparse ones adding to the impact of each. It's as flawless a comic book can be in regards to art.

'Survival Fetish' is an intriguing new title that provides plenty of action and tension in a unique dystopian world. A part of the world that should be paradise but has transformed into a dangerous gauntlet for its inhabitants. It's an interesting opening salvo that is primed for more action, more revelations, and frankly, to see how far Saheer can go before getting shot. It's worth checking out.