REVIEW: 'Come Into Me' #2 by Zac Thompson, Lonnie Nadler and Piotr Kowalski

When a woman dies after her consciousness is transferred into the mind of inventor Sebastian, she becomes the voice in his head he can't escape. While they try to come up with a way to store her consciousness externally Sebastian must reevaluate his life whether he wants to or not. 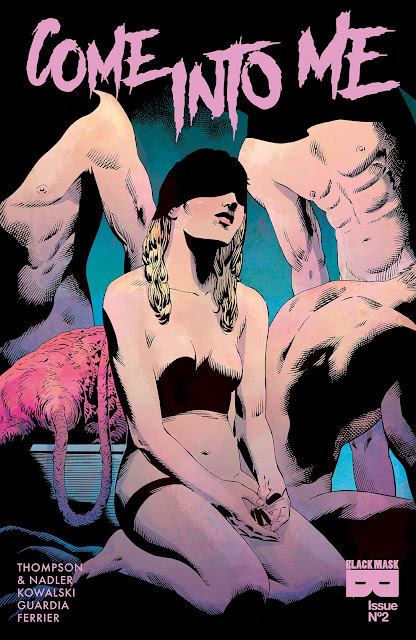 Anytime readers stray from the familiar superhero fare in comics, an entirely new world opens up of endless possibilities and stories. There's no shortage of genres obviously, and Come Into Me occupies a couple of those. It's a body horror story first and foremost but it's also a sci-fi medical drama with a clever feminist undercurrent. Imagine a Black Mirror-version of "All of Me" written by Michael Crichton and directed by David Cronenberg and you get the feeling invoked by this excellent series.

Sebastian is kind of a dick and he knows it. He's been overcompensating for a long time. His brilliance has led to one abrasive demeanor. This transference project was supposed to be his miracle invention, a medical marvel that will change the way we interact with each other by sharing a body. Now, that Becky's body has died she's trapped in his mind with access to all his memories. She begins to unravel the events of his life that have shaped his personality and it's not always pretty.

She also gets to experience what it's like to be a man whose voice is suddenly given weight. It's something as a woman isn't always the case. As a guy, being taken seriously and listened to isn't usually a problem especially in a supervisory role. So when Becky mentions her suddenly empowering moment after taking over Sebastian's meeting it hit me. What I've always taken for granted, women sometimes don't have that the common courtesy of being given their proper respect and attention. It's a subtle and brief point but impactful because it's unexpected.

Zac Thompson and Lonnie Nadler find the drama on different fronts. Of course, there's the conflict in Sebastian's own head sharing the space with Becky, the race to find a method and a vessel in which to transfer Becky's consciousness, the ethical dilemma of selling this transference as a new type of social media, and possible side effects of such a procedure. There's plenty to sink your teeth into which makes this as involving as a novel.

Penciler Piotr Kowalski, colorist Niko Guardia, and letterer Ryan Ferrier work in unison to produce some inventive images that are dense with color and imagination. Their interpretation of what being in someone else's mind might look like works and the juggling of perspective between Sebastian and Becky is a delicate dance that doesn't fail. It all has to work together from the character designs to the right color tones to the lettering that differentiates the voices because if not the book doesn't work. However, there's so much precision and care taken in each and every panel that the reader is immersed in the story.

'Come Into Me' is a compelling cautionary tale with subtext and unexpected pathos of a complicated protagonist. Issue two dives deeper into the psyche of Sebastian and the stakes involved for everyone in and around him. This is really a smart and thought-provoking story that entertains some controversial futuristic technology with some very human side effects. The story continues to evolve surpassing even its debut with some tantalizing twists.
-------