REVIEW: 'Death or Glory' #1 by Rick Remender and Bengal

With a title like 'Death or Glory' and a writer like Rick Remender you know you're in for a raucous good time. Add the gorgeous art of Bengal and you have a new title that combines the best the medium has to offer in one kick-ass action comic. 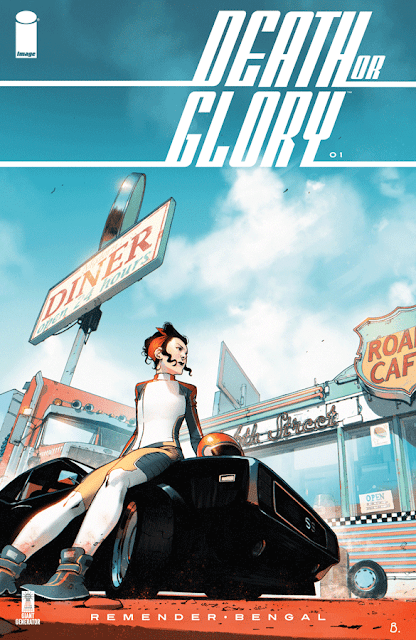 
Here's the lowdown: Glory Owen's father figure is ailing, dying of liver cancer, living off the grid and being in debt makes health care nearly impossible. Glory is desperate but motivated to get that money by any means necessary for a life-saving surgery. All it's going to take is some risky heists from some very dangerous and shady characters including Glory's ex-husband.

Sometimes, comic book writers remind me of movie directors in their approach to storytelling. In Rick Remender, I see a little of Tony Scott (Top Gun, True Romance, Man on Fire) in his work. A strong, determined protagonist that's flawed often rebellious but heroic with a will to overcome any obstacles. In doing so, we're taken on an action-packed thrilling ride rooting for the hero even when they fail at first. Remender has created such a protagonist in Glory which he quickly and earnestly develops in the opening pages presenting someone who loves her guardian, her friends, and her extended family of truckers and bikers that make up her desolate place in the world. She doesn't take her decision to do what she has to do lightly and once she gets going she's as driven as her muscle car.

At 40-pages, 'Death or Glory' is a great feast for world-building and character development. There are so many forces at work going against Glory that her odds seem insurmountable but she doesn't give up or surrender. Remender finds perfection in the imperfection of Glory's plan. When things begin to go sideways, the story finds its grit and speed. It's messy and brutal which makes it so entertaining and exhilarating.

You would think a story like this would require an artist whose style is as grungy and pulpy as its script. Instead, the anime-inspired beauty of Bengal's style gives 'Death or Glory' a different dimension you don't expect that not only looks great but elevates the action at every turn. Even a quiet scene like when Glory first walks into the garage is full of detail, rich in color and masterfully composed. You could literally teach an art course on that splash page alone. Remender has collaborated with yet another top-notch artist and the result is phenomenal.

'Death or Glory' is an action movie involving drug money, mobsters, dirty cops, and fast cars. It has everything including a determined female protagonist that will go to any lengths to save her "father." You don't really sit back and read this, you experience it. Bengal can do it all but the chase and fight scenes are relentless and exciting. Remender has another hit on his hands and worth every penny.