Molly Sue takes one last opportunity to convince Billy to fight instead of run. Billy just wants to skip town and escape his past. Legion is on their trail and Dust doesn't have time for pants. It's complicated. 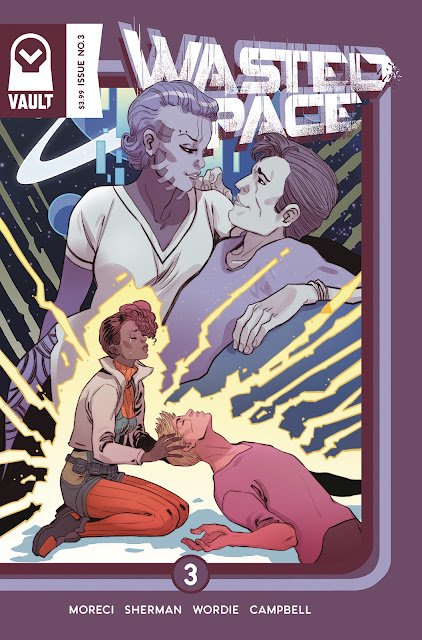 Billy's guilt and disenchantment have him determined to get out of town regardless of whatever doom is headed for the world. Being a prophet and convincing the faithful to entrust their future to a candidate that secured their downfall will devastate a man and Billy is beside himself with self-loathing. It doesn't stop Molly Sue, whose faith in Billy seems endless, from trying to change his mind anyway possible.

With all that said, time is of the essence. Despite Billy's rush to escape the planet,  Legion gets one step closer as he leaves a trail of destruction in his wake. Michael Moreci blends action with great character moments that explores Billy's growth and his discussions with Dust are amusing standouts. It seems Moreci has found his groove with issue three and it's probably the most fluid storytelling so far in the series. Combined with great dialogue and twists, this chapter shows the series is getting better.

Hayden Sherman's art style is a little quirky with boxy shapes and abstract backgrounds but the layouts and pacing are exceptional. Sherman is as good a storyteller with his pencils as any writer is with words. While the character designs can appear sketchy they are creatively constructed giving this world the proper intergalactic mix of humans and aliens it needs. Jason Wordie's colors are warm but occasionally pop when needed - Dusty's naked blue body (with the strategically placed yellow happy face) and Legion's giant red and black body definitely pop.

'Wasted Space' makes the pivotal turn in issue three that deepens the character development and thickens the plot. Moreci opens up this sci-fi adventure with some major turning points. The series has found its stride and has become one entertaining ride.