Wasted Space's first arc comes to an explosive close as Billy and the gang face what they think is the end game but it's only the beginning of their journey. 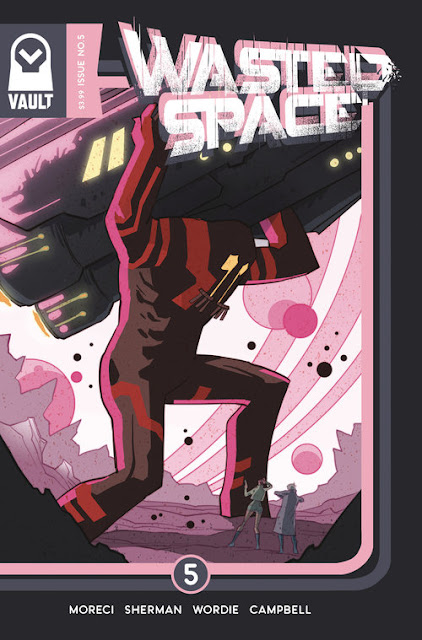 
Michael Moreci, Hayden Sherman, and Jason Wordie have created one giant and thoughtful sci-fi adventure full of ideas and moral dilemmas. Moreci's love of the genre and Star Wars, in particular, shines through as this ragtag group of former prophets and a sex machine seek redemption while trying to save the universe.

The conclusion of its first arc takes on some unexpected twists and new conflicts. It's also a satisfying ending of sorts of what was built through the first four issues. At its core is Billy's guilt that drives his desire to "unfuck the universe" when his endorsement of a tyrannical leader led to devasting consequences. He wants to undo his wrongs but is his method the moral and just one? It's just one of the questions that 'Wasted Space' raises that makes this title a more thoughtful read than your usual sci-fi romp. Even how the plot unfolds is an impressive mix of sheer space heroics and intellectual conversations.

There is an earnestness to Billy's intentions and the seriousness of his inner turmoil over what he's done. Once, he was happy to disappear and melt into the background trying to run away from his guilt. Now, he's determined to right the wrongs his decision helped create. With the help from the optimistic Molly and the practical Dust, they help balance out the more impulsive personality of Billy. It all blends into one mind-bending road trip with everything from a scorn robotic lover to the brink of nuclear annihilation.

Through Hayden Sherman's pencil-scratch, rough-hewn style, and Jason Wordie's striking color choices, 'Wasted Space' carves a niche for itself as a thought-provoking but fun space opera that picks your brain while delighting the eyes. It's a unique piece of entertainment that could easily exist in a small corner of the Star Wars universe if it wanted to.

'Wasted Space' has been upgraded to an ongoing title just in time as the end of this arc opens up some interesting new adventures to come. It's one of this year's best sci-fi fantasies that's smart, exciting and endlessly endearing. Moreci and company have created a welcoming experience that's as swashbuckling as it is engrossing.