Now officially an ongoing! The whole fam damily is back! Billy visits a crooked politician. Dust and Fury make sweet bot-love in unsanitary locations. A ghost haunts Molly's visions of Rex. And Legion pets a dog. The galaxy is still totally borked, but maybe together they can un-bork it... oh, probably not. 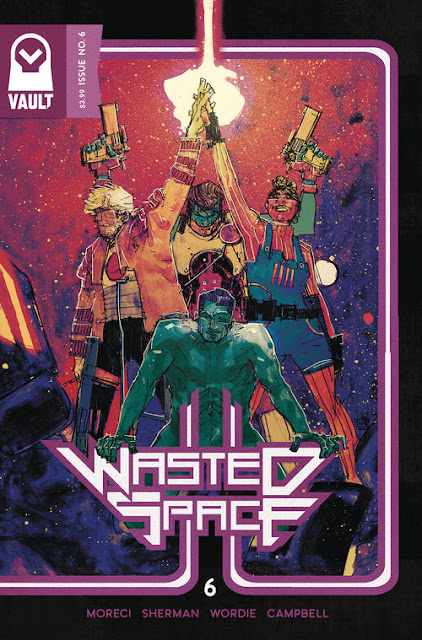 The second arc of Vault Comics' exceptional space opera "Wasted Space" blasts off in satisfying fashion when the gang crosses the galaxy to have a heart-to-heart with a one-percenter while Legion and the Creator contemplate the usefulness or lack thereof of humanity. It's another stellar chapter from Michael Moreci, Hayden Sherman, and Jason Wordie.

'Wasted Space' has carved out a unique place for itself as more than just a sci-fi comic. It's one of the most character-driven pieces in all of comics and its space setting is just a bonus. Sherman and Wordie give the series its world, the imaginative universe of sex robots, spaceships, and paradise planets. But it's the dialogue that crackles with hot observations about everything from human nature to the manipulations of gods to the hypocrisy of religion. It's the types of conversations you'd more likely find among friends in a barber shop, an old diner, around a campfire or in a bar. The conversational style helps make these characters matter because they have something to say, they have a belief system. You don't have to agree but they can't be ignored either.

Moreci's misfits are irresistible and Billy's scheme to kill the Creator with the help from a filthy rich politician only adds to the drama. Sherman's signature scratchy pencil-work results in some wonderfully imagined characters and environments. Wordie's colors add even more complexity and depth to Sherman's designs. The series just looks uniquely cool.

'Wasted Space' has been able to combine the adventurous spirit of Star Wars with the intellectual acumen of Star Trek in a series that redefines what a sci-fi story can be.