Here in the heartland of the U.S. of A., the world has ended! But worry not, because the mall still stands. And within the walls of this consumeristic mecca lies a new world order: box store tribes and name brand gangs, all vying for limited space and resources. So, actually...you can worry! Especially for poor Andre Reed, who, after the assassination of a tribal leader, has to navigate the mad haven to prove his innocence, and prevent the end of world, again! 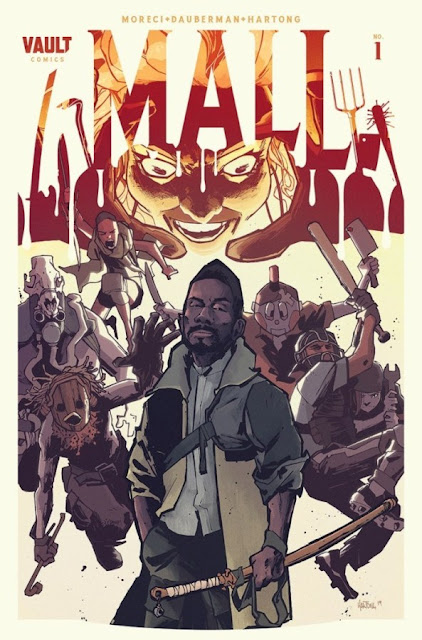 Michael Moreci and Gary Dauberman drop the reader right into the action. After a brief rundown as to how the world ended and made a shopping mall the last known refuge of humanity, a frightened girl holding a baby is attacked before introducing us to the main protagonist Andre Reed (not the Hall of Fame football player from the Buffalo Bills). The perpetrators wear some creepy masks and set a tone of mayhem and controlled chaos that serve as a prologue.

Reed's been accused of killing one of the gang leaders from the many tribes that have formed within the mall over the years. A tribal society that is as grimy and dangerous as any dystopian adventure you've seen in more familiar settings. It's a mall but could easily be mistaken for abandoned subway tunnels or an underground bunker. Artists Zak Hartong and Addison Duke create a dark shadowy world within the empty halls of the mall using muddy browns and enveloping shades of blue and purple. It's a creepy atmospheric landscape where anyone could jump out at any time. Hartong's style is reminiscent of other talented artists that don't necessarily provide a lot of detail in each panel but given the opaque world, these characters travel in, the obscurity of faces and bodies serves the story well.

'The Mall' establishes itself well in a post-apocalyptic tale that is fast-paced, mysterious and scattered with intriguing characters. It's a little Mad Max, a little Walking Dead, and some of The Fugitive thrown in for good measure. Moreci and Dauberman do enough to spark interest in issue two to see what else this new America has to offer.