DEJAH THORIS is back in a brand new ongoing series by sci-fi superstar Dan Abnett, launching this December! 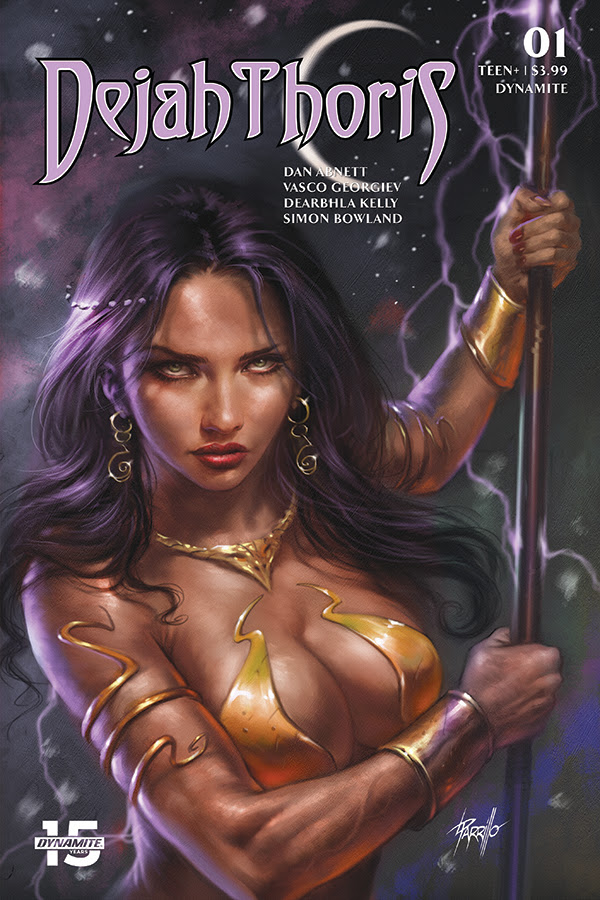 Writer Dan Abnett (Guardians of the Galaxy, Aquaman) and his fellow creators are heading to Barsoom to chronicle the latest tales of Dejah. His co-pilot for this mission is artist Vasco Georgiev (Xena). The crew is rounded out by colorist Dearbhla Kelly (Red Sonja) and letterer Simon Bowland (James Bond Origin). 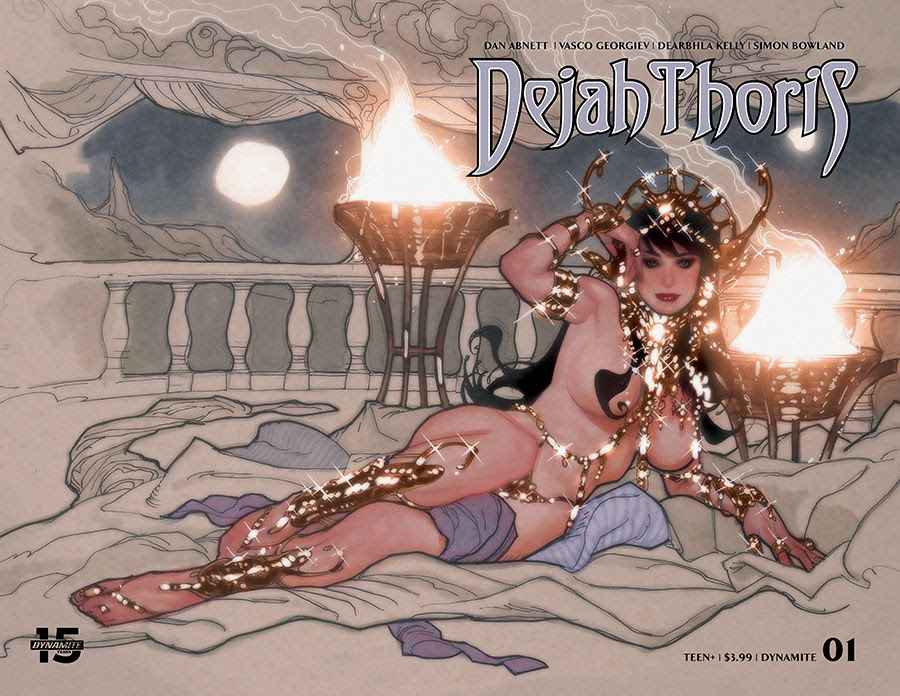 Barsoom has always been a dying world, teetering on disaster, but it may be closer to death these days. Dejah Thoris has been many things in life; a wife, a mother, royalty and an adventurer. Now her role as a scientist must take center stage, as she attempts to investigate why her homeworld is freezing. Other skills come into play when it’s discovered that political factions may be hiding the secrets of this global catastrophe. Glittering palace intrigue and visceral adventure abound in this new series, as Dejah joins her fellow Women of Dynamite “trinity” of Vampirella and Red Sonja. 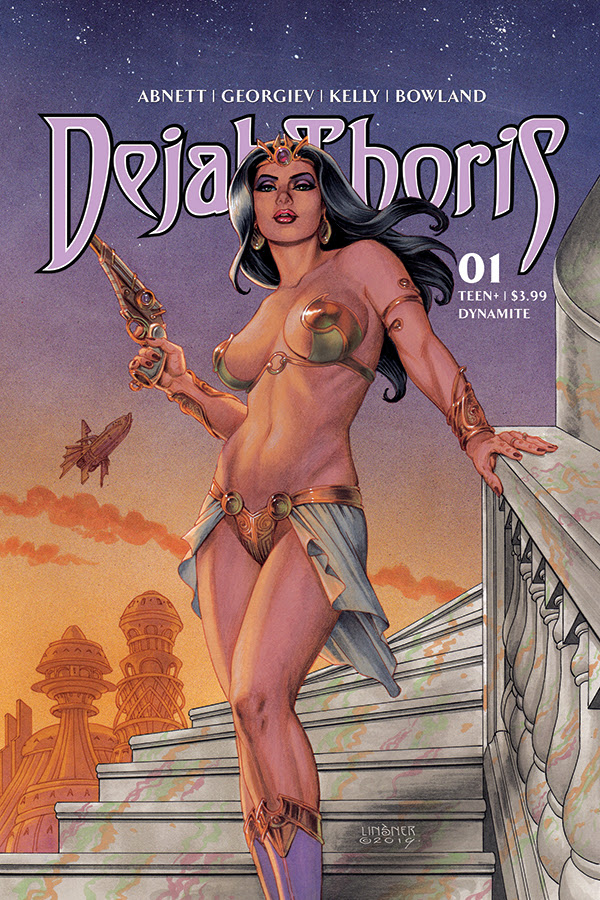 “I’ve been a huge fan of Edgar Rice Burroughs’s Barsoom stories since I was a kid - without question a fundamental cornerstone of Science Fiction, and an inspiration for so much of the cosmic wonder that we love today,” said writer Dan Abnett. “I jumped at the chance to write a saga in that world. It’s a dynastic epic of intrigue, action and adventure, with Dejah at the heart of it, and we’ve got an amazing art team to bring it to life.” 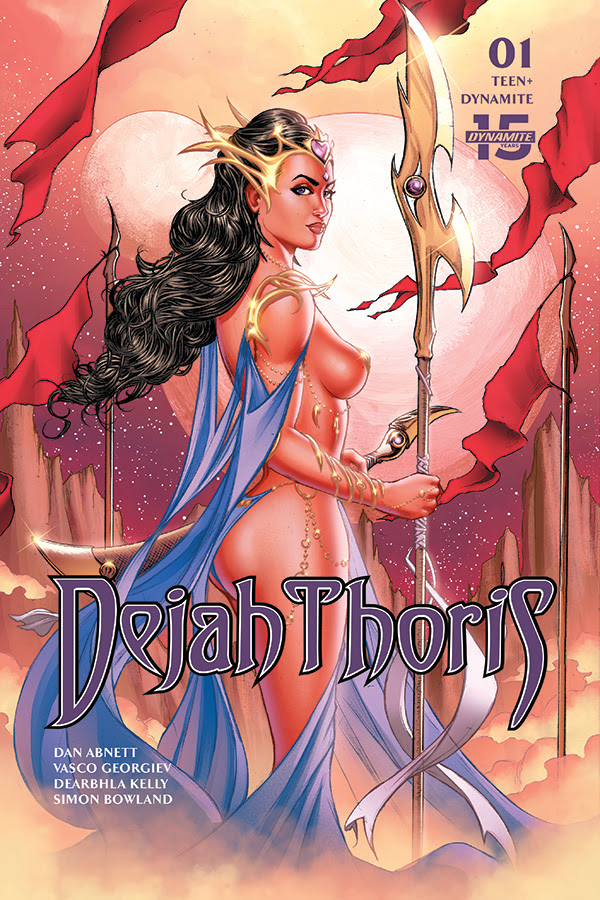 Abnett is the perfect match for the world of Barsoom, based on his pedigree of work. With a career spanning three decades across countless publishers, his most influential work is arguably his tenure spearheading Marvel’s spacefaring heroes for over half a decade. This body of work, nearly universally beloved by fans and critics included creating the modern iteration of the Guardians of the Galaxy and revamping several other characters. This cosmic epic provided the blueprint for Marvel Studios’ successful Guardians of the Galaxy franchise and the comics division will release a new sequel the same month as Dejah Thoris, with Abnett involved. While the intricacies of royal intrigue necessary for Barsoom can be found in his recently concluded Aquaman run. Readers may also be familiar with his sci-fi tales from a deep shelf’s worth of Warhammer 40,000 novels. 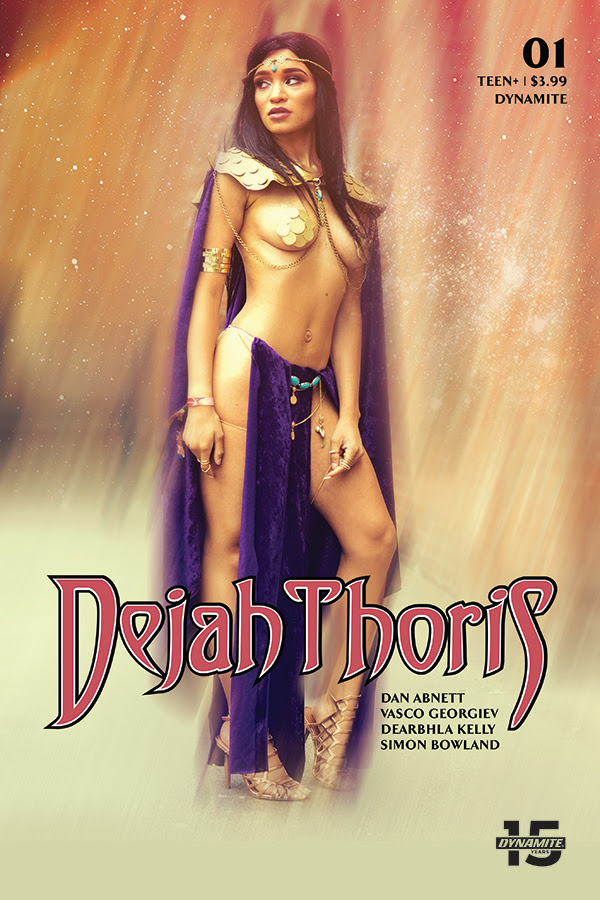 “The series’ protagonists are strong (mentally and physically), beautiful women and it is very important to me that their unique personalities be reflected in their character designs and actions. Dejah and her friends will be kicking lots of butt and will look great doing it,” said artist Vasco Georgiev. “Designing the Barsoom landscape and architecture is a dream as I also work as an architect. I try to give every city, building, and space a unique and instantly recognizable identity. The charm of Barsoom is that it combines futuristic technology and architecture with medieval design and customs. Imagining how to unify these concepts in every panel is a veritable treat.”

Besides her kickass abilities, acute intelligence, leadership abilities and charm, Dejah Thoris is of course renowned for her beauty. Dynamite has assembled a team of four cover artists for this first issue that are upheld by fans as masters of beautiful heroines. Painter Lucio Parrillo (Vengeance of Vampirella, Red Sonja: Birth of the She-Devil) is a natural choice, with his decade-long attachment to the franchise, having drawn countless covers for Dynamite’s first foray into Barsoom. On the other hand, Joseph Michael Linsner (Dawn, Vampirella: Roses for the Dead) has tragically only drawn one Dejah cover before, so Dynamite is correcting this egregious wrong. Even worse than that, Billy Tucci (Shi, Roses for the Dead) has plenty of experience drawing powerful women, but has never drawn the Princess of Mars. Completing the set is a breathtaking wraparound cover by the one and only Adam Hughes! Dynamite will also be offering an extremely limited black-bagged risqué version for those who want to appreciate Dejah’s full beauty in a manner more in line with Burroughs’s original vision. Cosplayer Mai (@maidenhellxo) returns to Dejah with another cover and the first cosplay cover on a solo Dejah Thoris series!

"We've wanted to work with Dan again for years, but he was tied up exclusively with DC for Rebirth, and he crafted some great stories adding to their mythos. When discussing a new Dejah Thoris series, we wanted to wait for Dan once we knew that was a possibility, and glad we did. His series is incredible, and I cannot wait for the fans to check it out!," said Dynamite CEO/Publisher Nick Barrucci. "Considering how great the scripts are, we wanted an artist who could complement them, and with Vasco coming off of his Xena run, he was the perfect fit. With some of our closest friends doing covers in Hughes, Parrillo, Tucci, Linsner and the fantastic cosplayer Mai, that's the cherry on top to excite new fans to pick up the series!"

DEJAH THORIS #1 will be solicited in Diamond Comic Distributors’ October 2019 Previews catalog, the premier source of merchandise for the comic book specialty market, and slated for release in December 2019. Comic book fans are encouraged to preorder copies of the issue with their local comic book retailers. It will also be available for individual customer purchase through digital platforms courtesy of Comixology, Kindle, iBooks, Google Play, Dynamite Digital, ComicsPlus, and more! 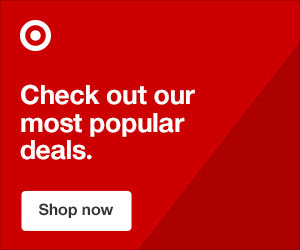