In the 1990s, DEAD EYES was a prolific stick-up man and hoodlum in Boston until he took down one last big score and disappeared. Nobody ever discovered the truth. He retired to be with the love of his life, but now he's back in the mask to save her. No one-not his wife, the mafia, or the cops-is happy that he's out of retirement. 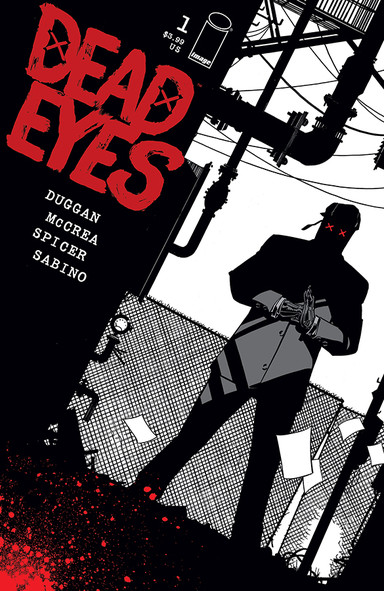 From JOHN McCREA, the artist and co-creator of MYTHIC and Hitman, and GERRY DUGGAN, the writer of ANALOG and DEADPOOL, comes the action, comedy, and drama of Martin Dobbs, a.k.a. DEAD EYES, the man who says he's descended from one of the original gangs of New York City. Get on board the oversized first issue of an all-new ONGOING SERIES for mature readers.

If 'Dead Eyes' looks familiar that's because it debuted last year as 'Dead Rabbit.' Two issues in a copyright battle ensued with a New York City bar of all things and the series was recalled and canceled by Image. But just like a phoenix, the comic by Gerry Duggan and John McCrea has risen from the ashes a year later with a new name and some additional content.

I missed it the first time so I'm glad the series got another chance at life because of the talented creative team behind it. This gritty street-level dark comedy needed the unvarnished splendor of McCrea's thick black lines and creative perspectives. There are some "camera angles" you won't see in other comics. There are some dynamic panels like seeing the action virtually overhead to over the shoulder of a rushing attacker for example. McCrea's use of black margins and shadows keeps the focus on the foreground which makes this a quick read because your eyes are always lead by what's center stage.

Duggan creates the Dead Eyes mythos using a news report as exposition to explain his back story. A commemorative look back at his disappearance after a reportedly big score is a clever way to seamlessly dump the information without appearing heavy-handed or awkward. It's the perfect lead-in to where this notorious criminal is now after years of stealing from everyone from banks to the mob. The legendary and elusive stick-up man is now just retired living with his wheelchair-bound wife. Having burned through his loot he now secretly works legitimately as a Wal-Mart greeter unbeknownst to his wife. But old habits die hard and Martin Dobbs, a.k.a. Dead Eyes finds himself back in the thick of things.

Stylistically, I was reminded of crime dramas like 'Kill or Be Killed' by Ed Brubaker and Sean Phillips and 'The Black Hood' by Duane Swierczynski and Michael Gaydos. There's a noirish aesthetic that makes the story feel and look realistically grounded. It's Duggan's humor that lightens the tone but not at the cost of the seriousness between Dobbs and his wife or the fight scenes. This isn't Deadpool after all.

'Dead Eyes' #1 is an intriguing crime dramedy with a complicated protagonist who's about to get in too deep as he comes out of retirement. All his old foes will be gunning for me which makes this reborn series one to watch.