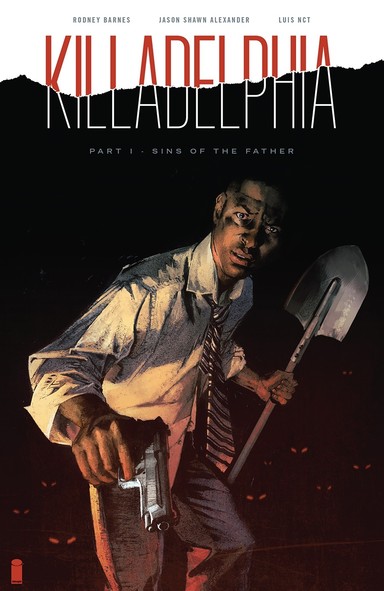 When a small-town beat cop comes home to bury his murdered father-the revered Philadelphia detective James Sangster Sr.-he begins to unravel a mystery that leads him down a path of horrors that will shake his beliefs to their core. The city that was once the symbol of liberty and freedom has fallen prey to corruption, poverty, unemployment, brutality... and vampires.
Welcome to KILLADELPHIA.

'Killadelphia' #1 is one of the most effective debuts of the year. It is gripping and haunting. Rodney Barnes has written one of the best supernatural crime thrillers in comics. Jason Shawn Alexander and Luis NCT have created the perfect gritty atmosphere for this stylish hardboiled story. Marshall Dillon's lettering skills take on an even more vital role in developing the narrative. Frankly, there isn't a weak spot in the issue.

James Sangster, Jr., makes it clear there's no love lost for his father, the esteemed Philadelphia detective. His mysterious death brings mixed feelings including relief but there's more to his death than meets the eye. The journal he left behind sets him on a path of incredible discovery and unspeakable horror. Barnes' story is so powerful and well-executed that the crime procedural works on its own even without the supernatural aspect. The driving force of the narrative is the voice Barnes gives to his characters.

Sangster, Sr., is a seasoned veteran openly ranting about the lack of resources in doing his job and busting his boss' balls. He's sarcastic but you can tell he means every word. His narration of checking out a lead is so matter-of-fact and knowing that you know he's seen some crazy stuff in his time. Barnes instills a fierceness, a sense of duty, and confidence in Senior that comes across so distinctively that it informs the reader without appearing heavy-handed or overly expository. This is who he is. He's driven by his job and is relentless.

Sangster, Jr., sees his father unfavorably. Upon his visit to his childhood home, the memories explain where all that hate and resentment stem from. Nonetheless, he followed his father's footsteps in law enforcement. Traveling from Baltimore to Philadelphia opened old wounds but his father's journal also opened up something dark and menacing that's lurked beneath the city for a long time. His voice is of pain but his sense of history and duty equals his dad's.

Their stories are intertwined seamlessly and almost mirrored in their investigations. Barnes leans on the criminal procedural and familial angst as a gateway to the supernatural. You'd think vampire stories had run their course in comics but 'Killadelphia' revives the concept into one terrifying prospect. Alexander's noir style is unrelenting. Each panel is shadowy and stark with sparse backgrounds putting the action of each scene to the forefront. Sometimes grainy and aged the images set a mood and tone that underlines the narration with frightening results. Luis NCT's colors are subdued for the most part. Grim, muted, and sad describe the colors throughout with the exception of splashes of bold colors for emphasis here or there. Dillon's lettering is integral to the story as they convey not only dialogue and narration but the writing in Senior's journal. It's immersive as we share in the evidence and follow the clues.

'Killadelphia' #1 is an outstanding supernatural crime thriller that's smartly plotted and expertly executed. If  'Law and Order' investigated an epidemic of murderous vampires it would probably look like this. There is so much more to this story, it has nuance and relevancy for its social commentary but feels natural and timely. But it's the terror that lies underneath the story that will chill you to your bones.