REVIEW: 'The Misplaced' #1 by Chris Callahan

From the mind of television graphic designer Chris Callahan comes the first of a 4-issue supernatural mystery miniseries that will leave you questioning the very existence of existence. What if paradise wasn't as it seemed? A tragic journey to the new world... Two souls separated by death... After a fatal shipwreck, James finds himself dissatisfied with the tedious machinations of eternity in the afterlife. A journey to discover the truth of his wife's disappearance reveals a terrible secret even Knowledge can't explain. The Misplaced is a dark supernatural tale of love and desperation that spans several planes of existence. 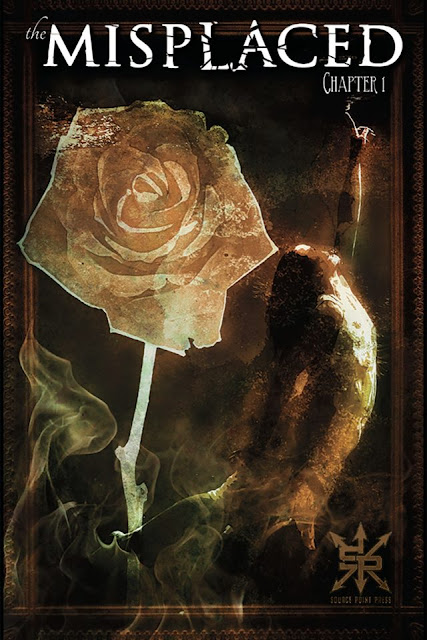 
James is experiencing an existential crisis unlike any other. See, he's already dead. Yet, Paradise isn't all it was made out to be. When everything you desire is within your reach what else is there to desire? Sadly, a shipwreck brought him here but without his wife. He yearns for her and is willing to do anything to find her. Anything.

Chris Callahan's impressive work as writer and artist shines in this intelligent and compelling narrative that puts the mysteries of the afterlife in focus. The Aspen Comics Talent Hunt winner asks the question if everything was perfect in your world would you be bored. For his protagonist James the afterlife sure is but he also feels incomplete without his wife who is nowhere to be found. He butts heads with an angel discouraging him from trying to escape from paradise.

Callahan's interpretation of this heaven-like plane is dark and intoxicating. Looking interdimensional and surrealistic, his use of digital painting, 3D models, and traditional painting creates an otherworldly environment. It doesn't look like what you'd expect heaven to look like but does seem like a world without time, a place where the past meets the present but in some sort of weird fever dream. It's really unlike anything you've seen before.

'The Misplaced' is a unique tale of love lost, the afterlife, and what it means to have found paradise. It's an intriguing theological debate wrapped in a romantic thriller. Callahan sets up a great first issue with a cliffhanger leading to issue two. It's a smart series waiting to be discovered.