In order to save a life, the lethal weapon Roku is going to have to kill a lot of people. The first appearance of the Minister of Blades! The bloody thrill ride reaches new heights by New York Times bestselling writer Cullen Bunn (Venom) and stunning artist Ram n F. Bachs (Detective Comics)! 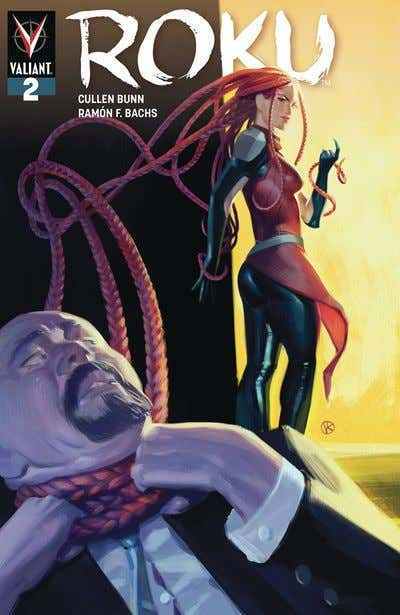 'Roku' #2 is low-key in comparison to the action-packed first issue. Not to worry though, issue two still has tons of action during the second half where things get a little worrisome for our anti-hero. But first Roku tries to piece together what her encounter with Ember-1 revealed about her identity.

Roku gets some unexpected help about her past and the value of the girl she's protected is revealed. It's a quickly paced issue but perhaps too quickly. While some things are answered early in the series, it feels like Cullen Bunn is trying to balance the drama with action but the latter seems to come at the expense of character building. It's a weird critique, I know, who doesn't like the action but I'd like to get to know the protagonist I'm rooting for a little more before the next set-piece.

Ramon F. Bachs and Stephane Paitreau continue to do an incredible job illustrating the series with remarkable skill in conveying bloody action. I think they thrive on it considering the deadly ways Roku uses her literal killer hair to pierce holes into her opponents. It looks like they're having fun creating these chaotic yet balletic fight scenes. They're equally adept at everything else especially with Paitreau's vibrant colors that give Roku's hair the rich firey glow it deserves. The character design for Roku's latest nemesis, the Minister of Blades, is nicely detailed and badass.

'Roku' is a great action series that just needs a little more character work. Roku's past is beginning to unfold while being under constant attack. It makes for a wild ride but as a miniseries, it'll be a short-lived one. Let's see if we can get more invested in Roku by the end.