Snow White awakens to True Love's Kiss... twenty-eight days after the zombie apocalypse! With the Seven Dwarves dead, the quintessential fairytale princess must join forces with her polyamorous Prince Charming and his tough-as-nails paramour, Rapunzel, to wage a losing battle against death itself. Bound by love and driven apart by jealousy, can this unlikely trio find a way to put aside their differences, or will they be devoured by the reanimated denizens of their once enchanted kingdom? Based on the hit play by the same name, Snow White Zombie Apocalypse is a story of deep woods and old magic mixed with a healthy dollop of blood, sex, kung fu, and gender politics. Y'know, fairy tales as usual. 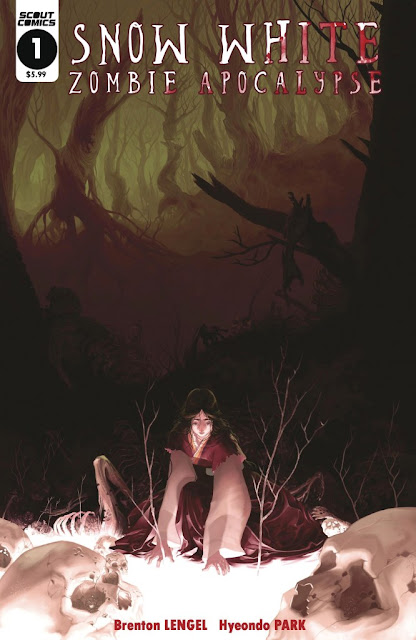 Mash-ups, in general, are fun diversions from the usual source material. Who doesn't like Abraham Lincoln as a Vampire Slayer or when the Predator visits the kids in Riverdale? Fairy tales are the perfect fodder to reinvent or reimagine putting whatever spin one wants whether it's comedic or poignant. Brenton Lengel has decided that Snow White had it way too easy so he's killed off the seven dwarfs in a zombie apocalypse leaving her with only the lothario Prince Charming and the badass Rapunzel in a dystopian wonderland that's bloody fun.

With a concept like this, it would be easy to go crazy and create a giant parody with gratuitous cartoonish violence but Lengel's script shows surprising restraint and frankly, some beauty. It opens with some poetic narration describing a seemingly tranquil stroll through the forest only to suddenly escalate into a vicious violent attack. It's at this point we know we're no longer reading a kid's fairy tale but a dark and terrifying retelling. The tone is set and there's more bloodshed to come.

Soon, we meet the anything but a damsel in distress, Rapunzel, who's more like The Walking Dead's Michonne than the tramped princess in a tower. She slashes and kicks off another zombie attacker with a wink and a quip. Who knew Rapunzel was a zombie-killing machine? What stands out in these fight sequences is the fluidity of the moves, the choreography is stylized and devastatingly portrayed. Because of the space Hyeondo Park gives these characters amid a beautiful meadow and woods, the confrontations almost resemble a video fighting game where the combatants go toe-to-toe. Park's anime-like art style and the brilliant color work by Jio Butler elevate this issue. They work in tandem with Lengel's script to hit all the right notes in expressing the humor, the horror, and the action.

'Snow White: Zombie Apocalypse' #1 is a fantastic debut that mashes up horror and fairy tales with clever writing and exciting art. Imagine 'Zombieland' blended with Grimm fairy tales and you get the vibe. It's well-executed and never feels over-the-top or done for the sake of parody. It's fun, exciting and well worth supporting an indie on the rise.