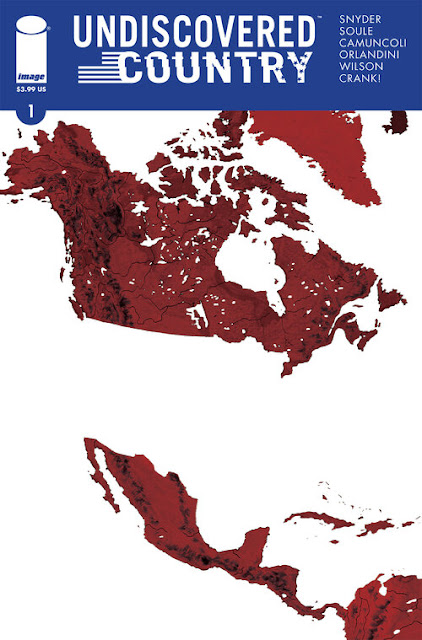 In this special oversized first issue, readers will journey into the near future and an unknown nation that was once the United States of America-a land that's become shrouded in mystery after walling itself off from the rest of the world without explanation over thirty years ago. When a team seeking a cure for a global pandemic breaches U.S. borders, they quickly find themselves in a struggle to survive this strange and deadly lost continent!

You're going to hear this a lot but it's true, 'Undiscovered Country' is the next big thing in comics. That's been the consensus so far among reviewers and it's with good reason. What Scott Snyder, Charles Soule, Giuseppe Camuncoli,  Danielle Orlandini, and Matt Wilson have created is audacious, sprawling, dense, mysterious, timely, and ripe to take over the zeitgeist. With 'The Walking Dead' over and 'Saga' on hiatus, there's a vacuum in comics that are waiting to be filled and 'Undiscovered Country' is poised to fill that void.

In the near future, the United States of America has isolated itself completely from the rest of the world. It's fortified its borders implementing cutting edge technology to thwart invaders even from the air. It's cut off communication altogether insulating itself for thirty years. No one outside its walls knows to what extent that isolation has transformed the once-proud global leader. When a pandemic threatens to kill the population of the world, a desperate team of scientists and experts are sent to the states for help. You're not ready to see what they find.

It's that anticipation along with the characters to see exactly what has become of "the greatest nation in the world" since sealing itself off. Snyder and Soule provide a lot of set-up with establishing this dystopian world but it doesn't feel heavy with exposition or slow. The pacing is surprisingly smooth with all the information that's being supplied through dialogue or news reports. The situation outside of the U.S. seems appropriately dire and urgent. The U.S. is a complete enigma and there's no guarantee they would help a world in crisis. Besides, what does life inside those walls look like now?

What hits you is that nothing in the story is too far-fetched. Not even the advanced technology seems outlandish or too science-fiction-y. You learn in the afterward from the writers themselves, years of piecing this story together took a lot of time and research. They even toured the CIA and DARPA, the Defense Advanced Research Projects Agency. There's a basis for what you see on the page which only makes it scarier and more alarming. If there was a comic for these uncertain times it's without a doubt 'Undiscovered Country.'

Aiding in bringing this tumultuous world to life are Camuncoli,  Orlandini, and Wilson. Camuncoli's lines are clean but the emotional range of his characters is vitally important and gives this story the powerful resonance it requires. The page designs perfectly capture the scope and breadth of what's at stake not just for this team of coalition forces but for the world. Orlandini and Wilson add depth and color to everything else with pitch-perfect precision. The art is surprisingly bright and colorful for the subject matter which lends a striking contrast to the immediate doom around the characters. Crank!'s lettering is a visual barometer of the varying degrees of stress, fear, and anxiety within every character. There isn't a false step in this star-studded creative team.

It takes a seasoned confident team of creatives to take on such a sprawling epic of a story where anything can happen. Forget about replacing 'The Walking Dead' this is 'Lord of the Rings' type of mythmaking. Issue one opens the door to a fascinating alternative reality that doesn't seem too fantastical simply because such a reality potentially is one outbreak away under an authoritarian regime. With that said, 'Undiscovered Country' is a first-class fantasy on the threshold of becoming the newest pop culture phenomenon. Get on board now.