Vampirella Reborn! Savage! Feral! A literal demon thirsting for blood! As humanity raises their greatest hope from the dead, will Pendragon and the rest of our survivor's be able to quell the beast that they have unleashed?!? 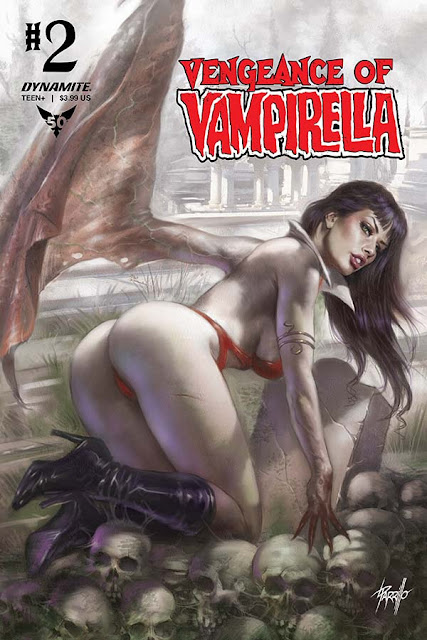 Originally debuting in 1994, Vengeance of Vampirella portrayed a more savage and feral look at the Daughter of Drakulon. Now, for the 50th Anniversary of Vampirella, original series writer Tom Sniegoski (joined by the incredible art of Michael Sta. Maria) is back and issue #2 features a host of incredible cover artists.

Vampirella is back, well...with a vengeance. She's returned from the dead and she is pissed off. Will Mistress Nyx's reign of terror be over or will she send Vampi back to her grave? The two are destined to cross paths once Vampi assimilates to life among the living again. For now, she's living on pure instincts and ravenous bloodthirst. My money is on Vampi though.

The first issue set up Vampi's return perfectly. Twenty-five years since Vampi's demise gave way to the evil rule of Nyx and the Chaos Lords, a desperate human rebel population fight back demons on the street for survival and the sorcerer Pendragon finds a way to resurrect the only savior that can restore harmony in the world. It ends with an understandably perturbed Vampi bursting from the grave. It was one of the most satisfying first issues to come along raising the anticipation of Vampi kicking butt upon her return to earth.

Unfortunately, issue two can't live up to the bar set in its debut. Not that it's bad it's just that we're still waiting for Vampi to be the center of her own series. It's understandable we have to wait for her to settle down since she's completely feral out of the grave wreaking havoc on anything that crosses her path. She doesn't know any better she's just functioning on pure primal instinct. So when she quickly dispatches some of the Chaos Lords scouts in bloody fashion it makes perfect sense. She's not going to be herself right away. So two issues in we don't have a sense of the Vampi we know and love yet. She's pretty much one-dimensional, a savage killing machine who's confused and thirsty for blood. Vampi is able to distinguish between the helpless humans and the terrorizing demons of the Chaos Lords that patrol the skies.

Meanwhile, Mistress Nyx realizes that while she may rule the earth she's still middle management to her corporate overlords the Chaos Lords. She's late for a meeting with them and they're none too pleased. It's an amusing scene even relatable to those of us who don't always meet sales projections and hear about it during conference calls. For Nyx, she has to quell the rebel uprising and get her ass on time for the next meeting. Who knew the Chaos Lords were all about world domination and punctuality.

Art-wise, Michael Sta. Maria and Omi Remalante, Jr. do a fantastic job creating a world in ruins, bleak and dark with creative character designs. The demon designs are especially fun and fierce. They find ways to make the most of mundane scenes interesting with different "camera angles" even if the pacing doesn't always work. Overall, it's solid visually speaking.

'Vengeance of Vampirella' #2 lacks the tension and anticipation of the first issue but sets-up Vampi's resurrection with enough violence to make it interesting. We've yet to see the real Vampi the one we know and love. There's an obligatory transition rising from the dead so it's understandable we get a rabid one-note killer while she assimilates but isn't very compelling. It's by the numbers but still looks great. Issue three should be a break-out so it's worth sticking around.