REVIEW: 'Going to the Chapel' #4 by David Pepose, Gavin Guidry, and Liz Kramer

It's time to bride or die! With the police about to storm the chapel, Emily must choose her allegiances and her own uncertain future. Can Emily face her fears of lifelong commitment, or will her anxieties be dashed by a runaway bullet? Find out here in this thrilling finale! 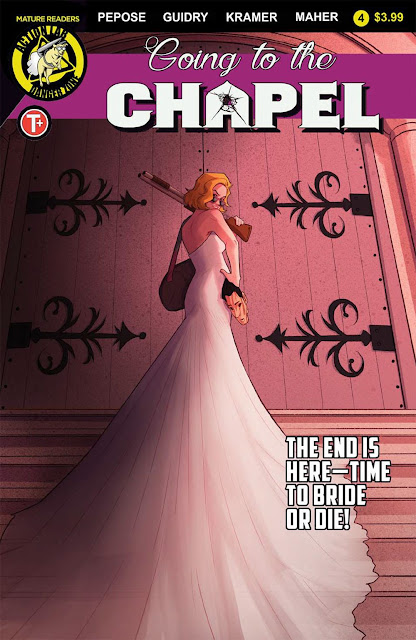 After what I considered a shaky issue three, David Pepose nails the landing in the final issue. Everything is neatly wrapped up with a couple of surprises. Part heist-gone-wrong, part romantic comedy, 'Going to the Chapel' has been a wacky ride filled with laughs and quirky characters with a romantic center.

The biggest issue was the bride, Emily, who had shown some peculiar behavior that was downright mean towards her supposed fiance, Jesse. Once her old flame Tommy came into the picture as the ringleader of the Bad Elvis Gang holding them hostage she began to waver on her nuptials. Now granted, she was unsure prior to the attempted heist but it seemed she didn't care that much about Jesse afterward even as he was shot.

Pepose saves this subplot with some earnest dialogue and interaction between the two that rights the course in a meaningful way. Meanwhile, the police are drawing near about to bust in so time is of the essence. The conclusion is a nervewracking race against time with some clever detours. It fittingly ends with one wild twisty turn.

As usual, Gavin Guidry and Liz Kramer produce a brightly colored story full of expressively drawn characters that bolster the emotional punch of Pepose's writing. The art has been consistently inventive and engaging throughout the series.

'Going to the Chapel' fills the void in comics that are just fun and adventurous stories designed to entertain with original ideas. Outside of superheroes, the place for these kinds of stories is best found at independent publishers. Action Lab continues to foster creators like Pepose with wild stories you can't find anywhere else. This is another home run.